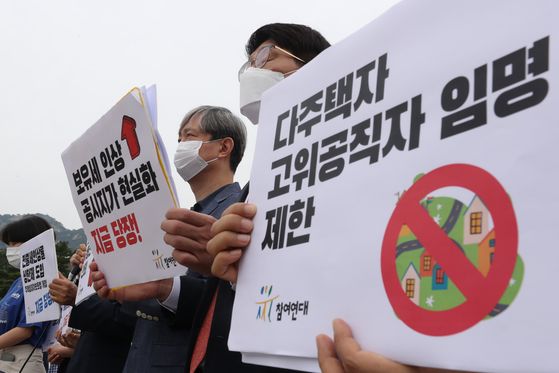 The People's Solidarity for Participatory Democracy, a liberal civic group and an ally of the Moon Jae-in administration, holds a rally Monday to denounce the government's hypocrisy on real estate policy. The group demanded that people who own multiple residences be banned from top appointments. [YONHAP]


Despite the Moon Jae-in administration’s attempts to make it more expensive for people to own numerous residences, senior members of the Blue House continue to do so.

On Dec. 16, 2019, Chief of Staff Noh Young-min strongly advised presidential aides to sell any second residences they owned. Noh said if they own more than two homes inside the capital region, they should just keep one and sell the rest as soon as possible.

Yoon Do-han, senior presidential secretary for public communications, later told reporters that Noh urged aides to sell properties in areas designated as speculative or overheated zones. According to Yoon, 11 senior secretaries and secretaries owned more than one property inside such areas, including Sejong.

Six months later, six of the 11 officials are still working at the Blue House and none of them are single-home owners as of Monday.

According to the official gazette on Monday, Senior Presidential Secretary for Civil Affairs Kim Jo-won owns two apartments in Dogok-dong, Gangnam District, and Jamsil-dong, Songpa District, of southern Seoul. Both are overheated areas.

Senior Presidential Secretary for Economic Affairs Lee Ho-seung owns two apartments in Bundang District of Seongnam, Gyeonggi. It too is an overheated area. Labor Secretary Cho Sung-jae owns two properties — one in Songpa District and another in Sejong, both overheated.

Land and Transportation Secretary Yoon Sung-won, a Blue House official in charge of the real estate policy, owns an apartment in Seoul's Gangnam District and another in Sejong.


The People's Solidarity for Participatory Democracy (PSPD), a liberal civic organization and an ally of the administration, held a press conference Monday to denounce the Moon administration’s hypocrisy on real estate policy. It said the government’s measures to cool down real estate prices and crack down on speculation announced over the past three years were a total failure, and demanded stronger actions including a higher comprehensive real estate tax.

The Moon administration has announced 21 different sets of antispeculation measures, the last as recently as June 17. The PSPD noted that the measures did nothing since the average price of an apartment in Seoul has skyrocketed by over 50 percent over the past three years.

A longtime political ally of Moon lamented the current situation.

“I am shocked that they are not selling even though the president and the land minister told them to do so,” Cho Ki-suk, a professor of international relations at Ewha Womans University, wrote in a Facebook message on Sunday.

Moon worked with Cho in the Roh Moo-hyun Blue House from 2005 to 2006. At the time, Moon was senior presidential secretary for civil affairs and Cho the senior public affairs secretary.

Land and Transportation Minister Kim Hyun-mee also said last week that it was regretful that presidential aides are stilling holding on to their properties, possibly giving a wrong sign to the market.

In an interview with MBC Radio on Friday, Kim agreed with the interviewer that only Park Jin-kyu sold some properties over the past six months.

“If they had sold homes, it would have been great,” Kim said. She also agreed that presidential aides who hold on to multiple homes are signaling the market that it will be profitable to keep properties.