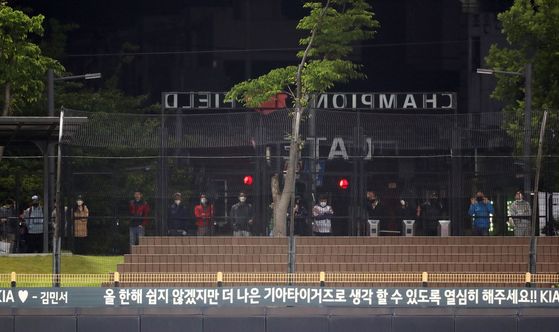 Kia Tigers fans watch a game through the outfield fence at Gwangju-Kia Champions Field in Gwangju on May 19. [YONHAP]


The KBO released the guidelines for fans and clubs reopening stadiums on Tuesday.

After two months playing baseball behind closed doors, KBO clubs will be permitted to begin allowing fans back into the stands at some point in July, although the exact date has not been set.

The new rules focus on attendance, cheering, food and drinks and social distancing.


Attendees will be required to wear masks at all times from the moment they enter the stadium until the moment they leave. Social distancing rules will be strictly enforced, with 1-meter (3-foot) increments clearly marked on the floor in all areas where people might queue, such as the entrance, bathrooms and concession stands.

Like players and staff, fans will be required to have their temperatures taken as they enter the ground and will be prohibited from entering the stadium if their temperature is over 37.5 degrees Celsius (99.5 degrees Fahrenheit).

Once in the stadium, fans will have to sit one seat apart from each other.

To ensure that all attendees at games are identifiable and traceable, tickets will only be available for purchase online with credit cards. Before finalizing the only purchase, customers will have to confirm that they agree to the new guidelines.

The KBO is strongly encouraging fans not to buy tickets from illegal scalpers, highlighting the added risk this year.

Ryu Dae-hwan, the secretary general of the KBO, says the league is also considering using QR codes to track fans.

"We're looking into possibly using QR codes because it will address the problem with contact tracing for people who buy tickets from scalpers," Ryu was quoted as saying on Yonhap. "On the other hand, it can also be inconvenient and intrusive."

QR codes are currently being used across the country to keep a record of visitors to venues so they can be tracked down in the event of an outbreak in Covid-19 cases.

Within the stadium, cafes and other food stands may be open, but bringing food into the stadium will be prohibited. The area where fans are allowed to eat is likely to be limited, or food could be completely banned.


Alcohol will not be served in the stadiums as drinking for long periods of time would require attendees to remove their masks. Water and other drinks will be available.

The activity zones available at some stands, like Incheon Munhak Baseball Stadium's Barbecue Zone and Suwon KT Wiz Park's Playstation Lounge, will be closed, as will the non-assigned outfield seating, to discourage people from gathering in groups. The KBO has also asked fans not to bring young children to games as they have a hard time wearing masks for a long period of time.

Cheering will also be limited.

"We're just waiting for the government to make the final call, and we don't know exactly when that will be," Ryu was quoted as saying. "But the earlier the better for us. We're also prepared to make adjustments along the way should problems arise."

Despite the restrictions, the demand for KBO tickets is likely to be high when doors do open in the next few weeks.

The last few weeks have seen fans gathering beyond the outfield fence at Gwangju-Kia Champions Field to try and get a glimpse of the Kia Tigers in action, and even climbing a mountain behind Daejeon Hanbat Baseball Stadium to watch the Hanwha Eagles through the telescopes at a viewpoint on the summit.

Olympic team to play exhibition game against U-24 squad