As a new wave of Korean food spreads around the world, localized marketing strategies are proving to be the key to lasting success.

Local confectionery company Orion's successful localization strategies are well documented — its Choco Pies have proven especially popular in Russia thanks to the exclusive raspberry, cherry and now blackcurrant flavors it offers there. 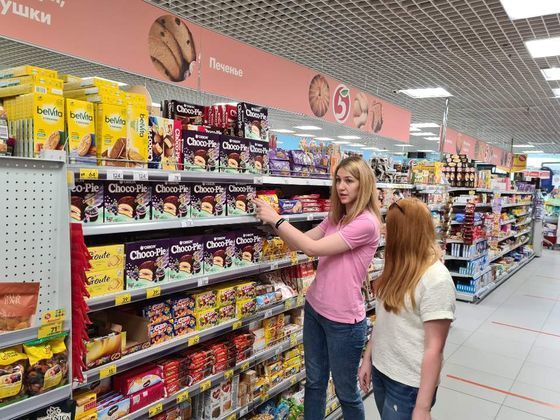 
The popularity of the Russian berry-flavored Choco Pies, which take up 10 percent of Choco Pie sales in the country, are inspired by the jam-making tradition in the country. All three fruity varieties are unavailable in Korea.

Choco Pie's localization success might be well known, but it isn't the only Korean company that has found success by tailoring its taste to local preferences.

In 2014, food company Daesang entered the U.S. market with its Korean chili paste. The company added more water to its gochujang chili paste, so that it has a similar consistency to the sauces common in America. The packaging style also changed, from a bright red tub to a squeezable tube. 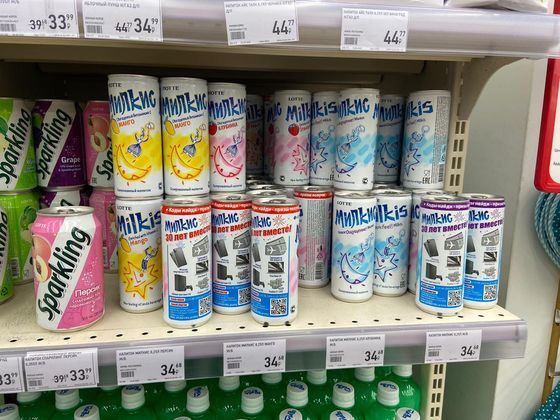 Fruit-flavored Milkis cans are displayed in a market in Russia. [LOTTE CHILSUNG BEVERAGE]

In Russia, Milkis is available in 11 different fruit flavors including strawberry, orange and pineapple. All 11 flavors are unavailable in Korea.

When Lotte Chilsung Beverage first entered the Russian market in the early 1990s, they only sold the original version containing 10.9 percent non-fat dry milk. The company says it soon realized that Russians enjoy fruit flavors, especially fruits that are difficult to grow in the country, so it introduced orange and strawberry varieties.

Two unique flavored drinks proved popular in Russia, so the company expanded the varieties and currently has a total of 12 including the original version. Lotte Chilsung Beverage record 12 billion won ($9.9 million) in Milkis sales in Russia last year, a 50 percent increase compared to the previous year.

Southeast Asian countries are also a popular target for localization.

Hite Jinro, Korea's largest soju maker, has been trying to boost its popularity in the Thai market since 2015.

After its grapefruit-flavored soju became popular there, the company newly released a strawberry soju-based liquor last year. Hite Jinro‘s soju sales have increased 22 percent annually on average in Southeast Asia over the past four years.

Orion is expanding its business in Vietnam with the introduction of new products like bread and crackers.

Orion also released a rice cracker called “An” in the Southeast Asian country. About 15.8 million packs were sold since its introduction last year, reaching 10.6 billion won in sales.

Instant noodle maker Paldo’s dosirak, or lunch box, cup noodles are winning over the hearts of Russians as well. Again, the company has found success in Russia by expanding the number of options — there are two varieties in Korea and eight in Russia.


In 2012, the company unveiled a mayonnaise-flavored dosirak to tap into Russians’ love for the condiment. The cup noodles are all sold with forks to tie in with local culinary habits. A total of 5.4 billion have been sold since the product was first introduced to Russia in 1991.

Lotte Chilsung Beverage’s Korean ginseng wine, which was taken off shelves in Korea in 2007, has been a big hit in Nigeria. Referred to as the “magic drink” or “oriental liquid Viagra,” Korean ginseng wine is so popular that made-in-China knock-offs are appearing in foreign countries. When compared to three years ago, sales are consistently increasing and reached 170 million won last year, from 130 million won three years ago.

“Korean ginseng wine started to gain popularity since the early 1990s when Korean companies entered the Middle East and African markets as ginseng was often given as a gift,” an employee from Lotte Chilsung Beverage said. “As the whole root of the ginseng can be found inside the bottle, I guess foreigners find [it] attractive. ”

CJ CheilJedang, on the other hand, is trying to expand its presence in the global market by keeping things traditional.

[Taste of Hansik] Up your jeon game with fresh squash

K-food finds its footing in Japan