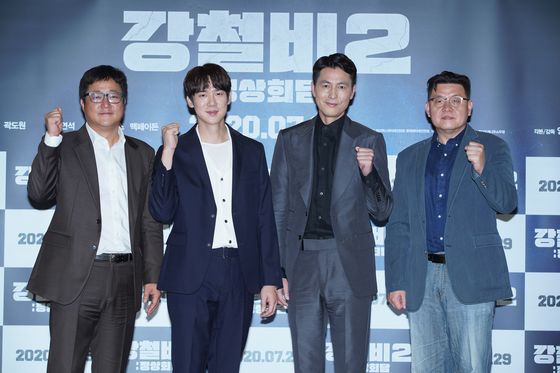 
Imagine this mind-blowing scenario: three leaders of three countries—North Korea, South Korea and the United States—are kidnapped in a nuclear submarine as part of a coup by North Korea.

This is the plot for “Steel Rain 2: Summit,” which pictures the three leaders gathering to sign a peace treaty.

“Steel Rain 2: Summit" can be seen as a complementary sequel to "Steel Rain (2017)," director Yang Woo-seok said at an online press event on Thursday. “Although the plot and the characters are different, the overall cinematic universe and the theme of the story remains the same—what we could do about our division, unification and the threat of war that exists within the country.”

Yang added that his latest film may contain a more objective view of the Korean peninsula’s diplomatic situation compared to “Steel Rain,” which was about a budding comradeship that arises between a Northern Korean agent and South Korean senior presidential secretary.

“If the two comrades were able to do something about their situation concerning that of their two countries’ in the prior film, in this film it becomes more realistic—mirroring our current reality,” Yang continued. “The relationship between the North and South hasn’t changed that much in the past three decades, until very recently. We’ve gone back and forth between periods of reconciliation and tension, but we’ve never taken a step forward to make peace because it’s never been our own fight. Although we may suffer from the division, for the third parties [our situation] is related to their national interests. I tried to show our state [of helplessness] through the film.”

Jung Woo-sung and Kwak Do-won, who played the Northern soldier and South Korean politician, have switched their roles for the second film. In “Steel Rain 2,” Jung assumes the role of the South Korean president while Kwak is the Northern leader of the rebellion.

“It was my first time playing a North Korean, and I did struggle a bit with the accent,” Kwak said. “I didn’t think that my character was evil. He just represents a different side of interest that deviates from the current North Korean leader.”

“At first, I was overwhelmed with the daunting task of connecting with the role of a leader who has to run a country,” Yoo said. “But as I probed deeper into the character, instead of simply labeling him as the leader of his own nation, I thought what would he worry about when he meets other leaders who are much older than him and have different ideologies and mindsets. When I brought him down to that level, I could relate to him more.”

“This character is a very vulgar and narcisstic man who thinks that he’s [always] right and everyone else is wrong,” said Macfadyen through a recorded video chat at the press event. “But the story is incredibly human [while] I found it to be a very interesting political drama set in this extraordinary situation where three powerful men are kidnapped and put into this nuclear submarine.”

“Although the questions that the film throw to the audience are realistic and rational, what drives the story forward is the rapport between these three leaders,” Jung said. “There’s a lot of black humor and satire in their dialogue, and when I read the script I thought I was watching an episode from Saturday Night Live.”

“It’s hard enough to be in an airplane for hours, let alone in a submarine,” Yang said. “When we watch the news about summits, we’ve actually never seen it on live broadcast. We just see the press talk about it for weeks, listen to the announcements made and that’s all. But when they [the leaders] are trapped in a submarine together, they have to face each other for a long time, whether or not they want to. In a way, they’re holding a summit inside the submarine, and we, as the audience, can see it happening scene by scene.”

The film is scheduled to hit local theaters on July 29.