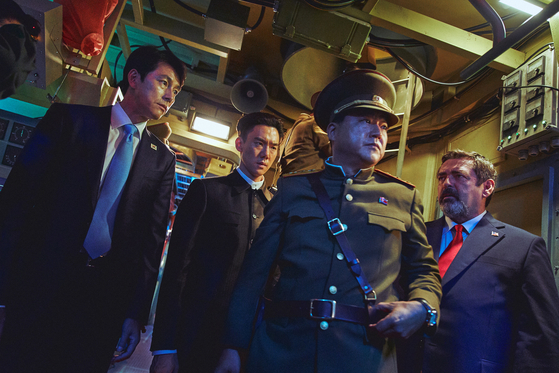 A scene from Steel Rain 2: Summit, an action thriller about three leaders from the United States, South Korea and North Korea, who are abducted in a nuclear submarine. [LOTTE ENTERTAINMENT]


In recently released “Steel Rain 2: Summit,” state heads of South Korea, the United States and North Korea gather for a peace treaty, get kidnapped by a North Korean military coup group and are confined in a nuclear submarine.

Some viewers question, “Why is the North Korea-U.S. summit held in Wonsan, North Korea?” “How can the President of the United States get kidnapped so easily?” and even “How can the president of South Korea be so handsome?” Despite questions involving the plot, it is interesting how the movie depicts power dynamics around the division and the Korean Peninsula.

The movie cost 15.4 billion won ($13 million) to make, and half of that was spent on the computer graphics for the submarine battle scene, which is based on outstanding research. It is spectacle to see the Japanese Maritime Self-Defense Force dropping sonobuoy and the nuclear submarine dodging antisubmarine bombs.

Submarines are a frequent setting for movies, including masterpieces like “Das Boot,” a 1981 film by Wolfgang Peterson, “The Hunt for Red October,” a 1990 Hollywood film, and “Crimson Tide,” a 1995 film. In Korea, a movie titled “Phantom, The Submarine” in 1999 was quite a success before “Steel Rain 2.” Filmmaker Bong Joon-ho participated in screenplay, and the movie was criticized for poor computer graphics and plot similar to that of Japan’s “Silent Service.”

Submarine movies that are considered to be masterpieces depict the clashes and psychology of characters in the unique, closed space. “Steel Rain 2” evolves that basic structure, but rather than subtle description of psychology, it is more of a dichotomic confrontation. Regrettably, it is not on par with other masterpieces.

My imagination may be extreme, but I feel like the world with Covid-19 seems to be a submarine. The world where people and goods travel freely has been transformed into a closed world before the Age of Discovery, and people within the closed world and people from other worlds constantly clash with each other.

A submarine is a closed ecosystem. Without exchanges with outside, it is not sustainable. When internal members have a discord, the ruin will come faster. The world of Covid-19 should not be a “closed ecosystem.” When we make compromise and seek mutual interests, we can prevent devastation.