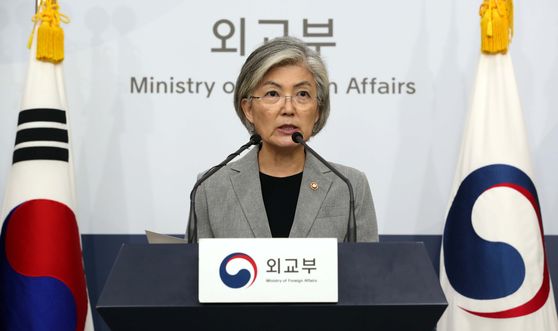 
Kang said in a press conference that Seoul “is prioritizing managing the situation as to prevent the deterioration of the situation on the Korean Peninsula and will continue to concentrate diplomatic efforts in an across-the-board manner to get North Korea to return to dialogue.”

She continued, “While maintaining a firm readiness posture, we will focus efforts toward giving momentum to South-North and North-U.S. dialogue.”

After Pyongyang’s hard-line posture on propaganda leaflets crossing its border and its explosion of the inter-Korean liaison office in Kaesong in June, Kang noted that North Korea has at the moment “halted additional steps than can worsen the situation on the Korean Peninsula.”

Pyongyang, through its state-run propaganda outlets, has also recently condemned the Seoul-Washington working group meetings, which it describes as a mechanism to “justify” U.S. sanctions on the North.

Seoul and Washington in November 2018 launched the advisory body to coordinate policy on North Korean denuclearization, sanctions enforcement and inter-Korean cooperation. The bilateral working group is led by Stephen Biegun, the U.S. deputy secretary of state and special representative for North Korea, and Lee Do-hoon, Seoul’s special representative for Korean Peninsula Peace and Security Affairs. Some South Korean civic groups have seen the working group as an impediment to inter-Korean cooperation initiatives.

Kang said that both Seoul and Washington “assess that the working group has operated fairly effectively, but are aware that there are domestic concerns about it.”

Seoul’s top nuclear envoy Lee, in his visit to Washington last month for talks with Biegun, shared this issue with the U.S. side, and Kang said they “discussed how to improve the way [the working group] operates in order to dispel such concerns.”

Kang noted that South-North and North-U.S. tracks “need to go in tandem with each other and mutually propel each other.”

Biegun is expected to visit Seoul as early as next month, which could provide an opportunity to revive denuclearization negotiations that have been at a standstill since last year. Kang did not confirm the visit but said, “We have confirmed that the United States is prepared to hold a flexible position should North Korea return to dialogue and North-U.S. talks are resumed.”

She also said that “based on close South-U.S. coordination, we plan to strengthen international cooperation with key-related countries” including China, Japan and Russia, as well as the European Union.

Kang also noted that there is a “schism” between Seoul and Tokyo, pointing to Japan’s export restrictions implemented in July 2019 as the biggest factor for this rift. The export restrictions were a response to the Korean Supreme Court’s rulings in 2018 ordering Japanese companies to compensate wartime forced labor victims.

Seoul and Tokyo still have “a very wide gap” in their positions on wartime forced labor issues, and Kang said that the South Korean government will respect the Supreme Court decision and the victims’ rights while also taking into consideration bilateral relations.

She said, “We will continue to form our stance analyzing various matters such as Japan’s export measures.”