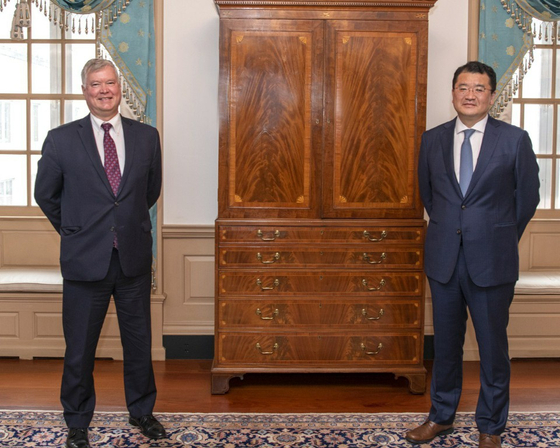 
U.S. Deputy Secretary of State Stephen Biegun kicks off a four-day visit to Seoul Tuesday for talks with South Korean officials about the bilateral alliance and coordination on North Korea amid stalled denuclearization negotiations.

South Korean top nuclear envoy Lee Do-hoon will meet Biegun on the same day to “discuss cooperation for realistic progress toward the complete denuclearization and establishment of permanent peace on the Korean Peninsula,” added the ministry.

Foreign Minister Kang Kyung-wha will hold a banquet for Biegun Friday and recognize his “efforts toward the development of the South Korea-U.S. alliance and advancing the Korea Peninsula peace process, while requesting the continued interest and support by the United States in the future.”

Biegun, a former Ford executive, was named the No. 2 American diplomat in December 2019 but retained his title as special representative for North Korea, a position he has held since August 2018, helming working-level negotiations over denuclearization with Pyongyang.

It is rare for the Foreign Ministry to announce a banquet in the official announcement of the schedule of a visiting diplomat.

Biegun’s visit to Seoul is expected to be the last for a top figure from the Donald Trump administration, so it could be considered a farewell dinner.

The U.S. State Department said in a statement Sunday that Biegun during his Seoul trip “will meet with officials in the Republic of Korea to discuss the U.S.-ROK Alliance and our shared commitment to regional security, stability and prosperity throughout the Indo-Pacific, and continued close coordination on North Korea.”

Other pending issues that may be discussed include sealing a new Seoul-Washington defense cost-sharing deal after the previous one expired at the end of last year.

Trump’s four-year term expires on Jan. 20, so there were no expectations of a breakthrough on Biegun’s visit.

His trip comes amid concerns by some analysts that Pyongyang could be planning provocative actions during the transitional period as U.S. President-elect Joe Biden takes office. Seoul has pushed to deter such provocations and continue the momentum of dialogue with Pyongyang even following a new U.S. administration.

Denuclearization negotiations have been at a standstill since Biegun’s last working-level talks with the North Korean delegation in Stockholm in early October 2019, which followed North Korean leader Kim Jong-un and Trump’s third impromptu meeting at the inter-Korean demilitarized zone on June 30, 2019.

Kim and Trump held two summits in June 2018 and February 2019, though the Hanoi talks collapsed without a deal as the two sides failed to overcome differences over denuclearization steps needed for sanctions relief.

Lee, the special representative for Korean Peninsula peace and security affairs, last met Biegun in early November while accompanying Kang on a visit to Washington shortly after the U.S. presidential election. Biegun also met with a group of ruling Democratic Party lawmakers that are a part of a task force on Korean Peninsula issues last month in Washington.

Biegun is also expected to meet with Unification Minister Lee In-young during his visit to Seoul and deliver a speech at a local think tank.

He is expected to be accompanied by U.S. officials including Alex Wong, deputy assistant secretary of state for North Korea, and Allison Hooker, senior director for Asian affairs at the White House National Security Council, according to diplomatic sources.