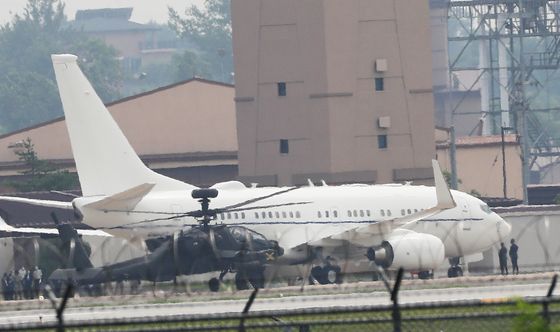 Stephen Biegun, the U.S. deputy secretary of state, and his team arrive on a U.S. military plane at the Osan Air Base in Gyeonggi Tuesday afternoon. [YONHAP]

The U.S. State Department announced Monday that Biegun, who doubles as U.S. special representative for North Korea, will travel to Seoul and Tokyo from Tuesday to Friday to meet with Korean and Japanese officials "to continue close allied cooperation" on bilateral and global issues.

Biegun and his team arrived on a U.S. military plane at the Osan Air Base in Gyeonggi around 3:30 p.m. Tuesday rather than taking a commercial flight amid the ongoing coronavirus pandemic.

Sources familiar with North-U.S. negotiations said that Hooker did not board the plane when Biegun and his team departed from Washington Monday.

One source said the absence “signals that no contact is expected to be made between the North and the United States during this trip to the South.”

Hooker, an East Asia expert who has been a key player in making contact with the North, usually accompanies Biegun on such trips, indicating that Washington may not be interested in arranging a summit with North Korea, which would require working-level meetings to be held. Hooker previously served as the director for Korean affairs at the NSC.

She was also part of a team headed by U.S. Ambassador to the Philippines Sung Kim that made arrangements for the first summit between North Korean leader Kim Jong-un and U.S. President Donald Trump, which took place on June 12, 2018, in Singapore.

Alex Wong, the U.S. deputy special representative for North Korea, is expected to have traveled with Biegun.

Biegun’s trip will be monitored for any breakthrough with Pyongyang ahead of the U.S. presidential elections in November. In a virtual summit with EU leaders late last month, President Moon Jae-in said he was keen on seeing a third North-U.S. summit before the American elections.

However, North Korea shot down the idea in a statement Saturday by First Vice Foreign Minister Choe Son-hui and then once more by Kwon Jong-gun, a senior diplomat in Pyongyang’s Foreign Ministry handling U.S. affairs, early Tuesday.

“This dialogue is expected to be an occasion to reconfirm the steadfast South Korea-U.S. alliance and to hold in-depth discussions on the Korean Peninsula and regional and global issues,” said Kim In-chul, spokesman of the Foreign Ministry, in a press briefing Tuesday.

The Foreign Ministry said Biegun will then meet Lee Do-hoon, Seoul’s special representative for Korean Peninsula peace and security affairs, to share assessments on situations unraveling on the peninsula as well as ways for Seoul and Washington to “work together in achieving substantive progress toward complete denuclearization and the establishment of permanent peace on the Korean Peninsula.”

Biegun is also expected to pay a visit to the Blue House and meet with Seoul’s new foreign affairs and security lineup. Last week, Suh Hoon was named new director of the Blue House National Security Office, Park Jie-won as chief of the National Intelligence Service (NIS) and Lee In-young as unification minister.

This marks the first trip to Seoul by U.S. senior officials since the outbreak of the Covid-19 pandemic and could be an opportunity to discuss a series of pending issues. Seoul and Washington have struggled to renew their bilateral defense cost-sharing negotiations after their previous Special Measures Agreement (SMA) expired at the end of last year. They could also discuss topics like Trump’s invitation to South Korea to join an expanded G7 meeting and ongoing Sino-U.S. tensions.