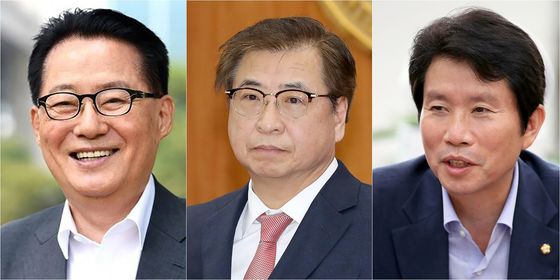 Moon named Park Jie-won, a former four-term lawmaker, to succeed Suh as the new head of the country’s main spy agency. Rep. Lee In-young of the ruling Democratic Party (DP) was nominated as the new minister of unification. 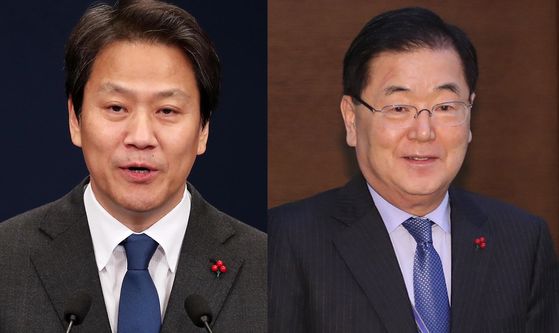 From left, Im Jong-seok, former presidential chief of staff, and Chung Eui-yong, outgoing director of the National Security Office of the Blue House, are named the special advisors to the president on Friday. [YONHAP]


Park, the nominee for the new NIS chief, is a 78-year-old politician known as one of the closest allies of the late President Kim Dae-jung.

“He contributed greatly in arranging the historic 2000 inter-Korean summit,” said Kang Min-seok, presidential spokesman. “He is also an advisor to the current government in inter-Korean issues. His expertise on North Korea is well respected."

President Kim met with then-North Korean leader Kim Jong-il in Pyongyang in 2000, and Park had traveled to China as a special envoy and met with North Korean officials to arrange the summit.

“Park is known for his ability to provide a concise and clear message,” Kang said. “He also has excellent abilities in intelligence assessment. He served on the Intelligence Committee during the 18th, 19th and 20th National Assembly, making him an expert on the job of the NIS."

Rep. Lee, former floor leader of the DP, was praised for his negotiation skills.

“He has demonstrated reform-mindedness and strong driving forces,” Kang said. “He is the best person to resolve the deadlocked inter-Korean relations with creativity and produce progress in inter-Korean reconciliation and cooperation and denuclearization of the Korean Peninsula by restoring trust between the two Koreas.”

“We have high expectations for him to lead international cooperation to peacefully resolve the North Korean nuclear crisis,” Kang said.

The National Assembly confirmation hearings are required for the unification minister and NIS director nominees.

Moon is expected to formally appoint Suh as the National Security Office director on Monday.