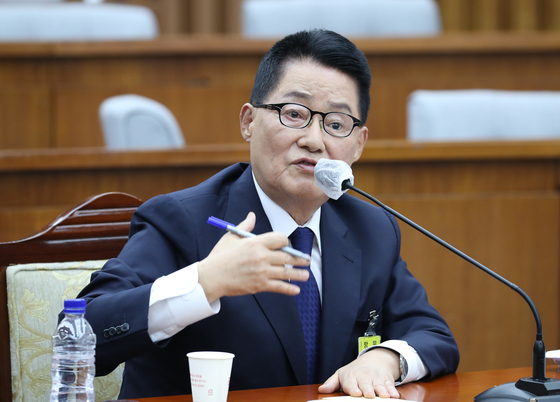 
Park Jie-won was confirmed Tuesday as the country's top intelligence chief on a party-line vote in the National Assembly, despite the main opposition party’s boycott of the vote.

The Intelligence Committee approved the confirmation hearing report for Park as the director of the National Intelligence Service (NIS) during an afternoon session. Only the ruling Democratic Party (DP) members on the committee attended the meeting, while the United Future Party (UFP) lawmakers boycotted the session in protest.

Earlier in the day, the conservative opposition party had demanded that Moon postpone Park's appointment until after the nominee was cleared of allegations that he had made a secret deal to pay North Korea to secure the historic inter-Korean summit in 2000.

UFP Reps. Ha Tae-keun, Joo Ho-young, Lee Chul-kyu and Cho Tae-yong — all members of the Intelligence Committee — said in a press conference that the public needs to know the truth about an alleged secret inter-Korean agreement signed by Park in 2000.

During Monday's confirmation hearing, Joo, the UFP floor leader, alleged that a backdoor agreement was reached between the two Koreas ahead of the 2000 summit. 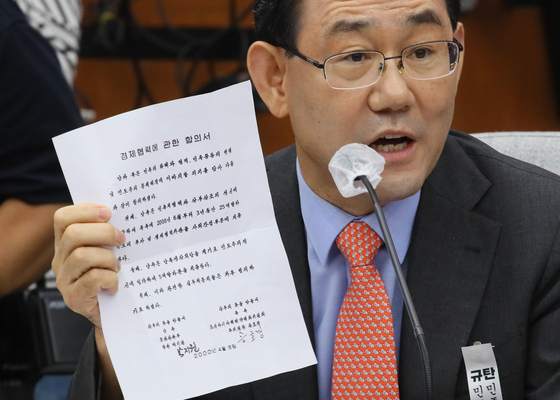 Rep. Joo Ho-young of the United Future Party shows a copy of what he called a secret deal signed by Park Jie-won in 2000, during Park's confirmation hearing on Monday to become the National Intelligence Service head. The document includes a promise to pay North Korea to arrange the historic inter-Korean summit. [YONHAP}


Park, a former four-term lawmaker, is largely credited with having arranged the first-ever inter-Korean summit. Former President Kim Dae-jung and North Korean leader Kim Jong-il met in Pyongyang in June 2000. Park had traveled to China as a special envoy and met with North Korean officials to arrange the event.

During the confirmation hearing, Joo presented a copy of what he said was an inter-Korean agreement signed by Park and his counterpart, Song Ho-Kyong, vice chairman of the Asia-Pacific Peace Committee, on April 8, 2000.

The document indicated that the South agreed to give to the North $500 million, based on humanitarian spirit, for the inter-Korean summit. The South also agreed to provide the North with an investment package and loan worth a combined $2.5 billion over the period of three years starting from June 2000. 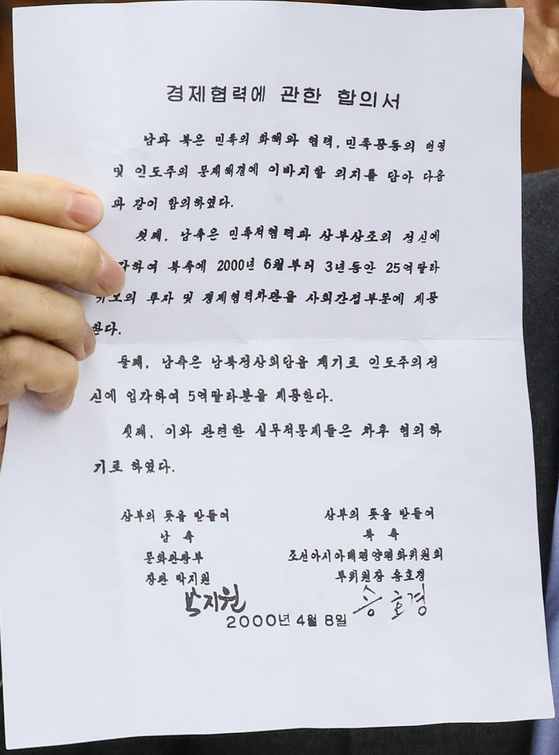 A copy of an agreement between the two Koreas presented by the United future Party during the confirmation hearing of Park Jie-won as the new National Intelligence Service director. The UFP said Park signed the deal to pay North Korea in 2000 as the South's special envoy to arrange the summit.


After Kim’s presidency, Park was convicted of helping Hyundai Group pay $500 million to the North in return for the summit and the conglomerate’s business rights in North Korea. In 2006, the Supreme Court sentenced him to a three-year prison term, but President Roh Moo-hyun pardoned him in 2007.

Although it had been verified by the court that $500 million was given to the North for the summit, Monday was the first time the alleged $2.5 billion promise to the North was revealed. If the document provided by Joo is authentic, the amount of the bribe to the North will increase from $500 million to $3 billion. It would also place most of the responsibility of paying for the summit on the South Korean government, rather than Hyundai.

During the confirmation hearing, Park said he has no memory of signing such a document.

“I don’t know how you have obtained this copy of the agreement,” Park said, insisting that his signature was forged to disgrace him and the late President Kim.

Joo asserted Tuesday that he had obtained the information from a reliable source.

“A former high-ranking public servant, in whom I have nothing but the choice to trust, came to my office and gave the copy to me,” Joo said in an interview with YTN Radio. “He asked me to raise an issue about this.”

UFP Rep. Ha said Moon can easily check the veracity of their argument by asking Suh Hoon, Park’s predecessor currently serving as the National Security Office director of the Blue House, about the secret deal. In 2000, Suh was the NIS official who oversaw the arrangement of the summit.

Park said Tuesday that the UFP’s accusation is groundless, and demanded that Joo identify his source.

He also threatened to file a defamation suit against Joo for disgracing the late President Kim and the officials who had organized the summit.