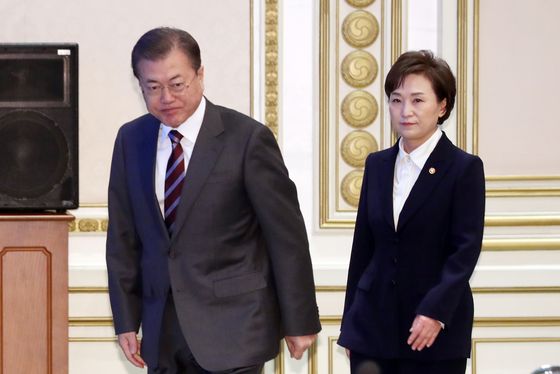 
Controversy surrounding the government’s real estate regulations is growing as apartment prices in several areas outside of the wider Gangnam area have seen prices shoot up as a side effect. Jeonse prices are also on the rise, fueling the backlash.

The failure of Blue House officials including Chief of Staff Noh Young-min to keep a promise made at the end of last year to sell their additional properties — intended to set an example in line with the administration's efforts to curb real estate speculation — has added to the criticism, on top of remarks made by Land Minister Kim Hyun-mee that everything is working just fine.

Kim was urgently summoned to the Blue House on Thursday as criticism grew.

Three weeks have passed since the government announced its 21st set of real estate measures since the Moon Jae-in administration took office in May 2017.

Yet the market shows no signs of cooling down.

According to the latest report by the Korea Appraisal Board, apartment prices nationwide in the last week of June rose 0.13 percent compared to the previous week.

While it was a dip from the previous week, which grew 0.22 percent, weekly growth has been rising steadily for nearly a year since the end of August last year, when it fell 0.01 percent.

The situation is most evident in Seoul.

Seoul apartment prices, which had been flat for nine consecutive weeks until the end of May, have been on the rise for the past month.

Despite the government announcing its measures on June 17, the same week, apartment prices ended up 0.6 percent higher compared to the previous week growing at the same rate again the following week.

“In just two months, the value of my apartment rose 150 million won [$125,000],” said an apartment owner who requested anonymity.

Recent surveys show that there’s a high expectation that apartment prices in the second half will continue to rise.

A survey of 4,090 people held between June 12 and June 22 by house search app Zigbang has found that 42.7 percent expect apartment prices to rise in the second half. While 37.7 percent said otherwise, 19.6 percent answered that apartment prices will likely remain unchanged.

By region, results were similar in the greater Seoul area.

Experts have noted that apartment prices in Seoul will likely rise as the government expanding its regulated zones in other parts of neighboring Gyeonggi and Incheon has essentially redirected investment back to the capital as there’s no merit in investing in the neighboring regions when the same regulations are now in effect.

In fact, apartment prices in the greater Seoul area — including Gyeonggi and Incheon — have slowed from a 0.28 percent weekly increase in the fourth week of June to 0.16 percent the following week, while the capital alone grew at the same rate of 0.6 percent in both weeks.

Among the four major Gangnam districts, Songpa District saw a 0.07 percent increase as investors rushed to purchase any available apartments before the stricter redevelopment rules came into effect in the neighborhood.

The neighborhoods to the north of the Han River, which have a larger number of apartments valued below 900 million won — the threshold for the comprehensive real estate tax — saw a sharper increase thanks to a huge influx of investors.

The larger concern is rising jeonse, or lump-sum deposit, prices.

The Korea Appraisal Board's latest report shows that jeonse prices were rising at a much faster pace in Seoul.

Nationwide, jeonse prices rose 0.12 percent. Seoul, on the other hand, saw prices rise 0.1 percent. Not only is this higher than the previous week’s 0.08 percent increase, but it also showed the sharpest growth since Jan. 20.

The problem with rising jeonse prices is the same as rising apartment prices: shortage of supply.

“The problem is the shortage of supply,” said Kwon Dae-jung, a real estate professor at Myongji University. “[The government] on May 6 announced plans to supply 70,000 units in Seoul and last year announced five new towns. But the problem is these are not in the areas that people want.”

Kwon added that because of the government tightening redevelopment projects, there has been no supply of housing units in the center of the city.

The professor said that because of the contracted real estate market, which is driving up prices, the number of people living in jeonse properties is increasing as it is difficult to purchase apartments in the current climate. As such, jeonse prices are going up as well.

The Zigbang survey agreed, with 18.5 percent saying the lack of supply in Seoul is the reason behind the continuing rise in apartment value.

The second biggest reason was the redevelopment projects, at 13.3 percent, and the third was the huge demand, at 10.4 percent.


Calls for Kim to go

On Wednesday, “Kim’s lie” was one of the most searched terms on Naver’s search engine.

On Tuesday, Land Minister Kim corrected a lawmaker, saying there have only been four measures that the government has announced on the real estate market.

“There were four real estate measures,” Kim told lawmakers during a hearing at the National Assembly. “The 22 is something that the media has added on.”

While stressing that she has no interest in arguing over the actual number of measures that the government has announced so far, she claimed that the media has included the government’s housing supply plans to raise the total number of real estate measures.

She continued that she didn’t think the policy was a failure.

“The policies are working,” Kim said. “The effect of the measures will show once all policies go into effect as some have not been activated yet.”

Her comments were seen as out of touch.

Petitions have been going up on the Blue House website since the June 17 real estate measures, voicing displeasure with the new policies.

One petition called for Kim to be removed from office, arguing that the government real estate policies not only have no practical effect, but also impede on people's rights.

The petition has over 30,000 signatures, as of Friday.

Another similar petition, which currently has nearly 2,400 signatures, says that Kim has to take responsibility for failing to stabilize the housing market despite rolling out over 20 measures and failing to provide an opportunity for middle and lower income people to fulfill their dream of being able to purchase their own home.

The writer, who claims to be an ordinary small- and medium-sized enterprise (SME) employee living in Incheon, said tighter regulations and excessive market intervention has resulted in a speculative environment. They claim that current regulations have removed opportunity by restricting loans, which are how most people access the property market.

“Many people’s dream is to break free from the sorrow of having to move around in jeonse or monthly rent,” the writer said. “Is this the philosophy of this administration, which is to put people first?”

Kim, since being nominated as the first land minister of the Moon administration in 2017, has drawn questions over her real estate expertise as her only prior experience has been as a lifelong politician. While working as a legislator, she did serve on the finance and budget committee.

Some on the internet ridiculed Kim, saying that she should be the next finance minister as she would boost the stock market as she did real estate prices.

There was a report on Thursday that the Blue House is actually looking into naming Kim as finance minister in the upcoming cabinet reshuffle.

The issue of senior Blue House officials owning multiple apartments has also re-emerged after a civic group revealed that senior government figures failed to follow through with their promise to sell their extra apartments.

Among the 18, eight of them have more than two apartments in the greater Seoul area. In total, they owned 17 apartments.

The other 10, including Chief of Staff Noh Young-min, at least part-own properties outside the metropolitan area. In total they own 23.

The eight officials with two or more apartments all located within the greater Seoul area saw their apartment value increase 62 percent since the current administration took office.

On average, the market value of the apartments was 1.9 billion won, with the most expensive apartment valued at nearly 3.3 billion won.

At first the Blue House tried to tamper down the public backlash, claiming that when Noh last year publicly advised senior Blue House officials to sell off all but one apartment, he was targeting those that fully owned more than two apartments in greater Seoul.

The Blue House on Thursday said officials will be selling off their apartments immediately once related restrictions are lifted.


But even then, the message was unclear.

While Noh was reported to have said he was planning to sell his apartment in Banpo-dong in the heart of Gangnam, the Blue House later clarified that Noh meant to say he was selling his apartment in Cheongju, North Chungcheong.

On Friday, Democratic Party leader Lee Hae-chan apologized to the public for the insecurity surrounding the real estate issue and promised to create legislation that would help people own their own homes.