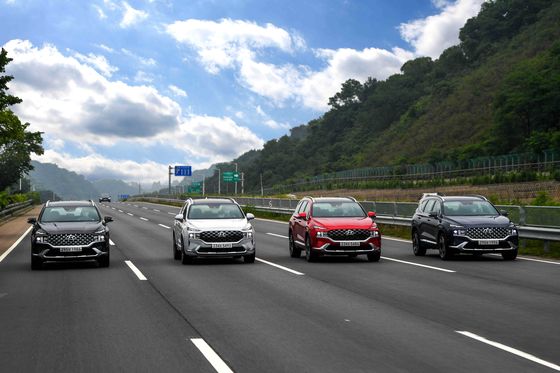 
GOYANG, Gyeonggi – Hyundai Motor’s flagship midsize Santa Fe has been a reliable option as a family SUV, with its spacious interior and nice fuel efficiency among its rivals. The value-for-money model has often been overlooked by others, seen as a boring option for all but the most practical.

In acknowledgement of such shortcomings, the latest facelifted version, which launched in Korea on July 1 —  two years after its fourth generation’s release in 2018 — is loaded with extras and smart driving features.

The Korea JoongAng Daily got behind the wheel of a new Santa Fe, one equipped with a 2.2-liter four-cylinder diesel engine rated at 202 horsepower with 45 kilogram-meters of torque. The two-hour course involved 65 kilometers of both highway and city driving and turned out to be congested the whole way.

Before enjoying its noticeably changed exterior, the reporter looked inside first and was quite baffled to see buttons everywhere.

The center console was packed with at least 20 buttons with different functions identified only by small pictograms, like squiggly arrows. There were neither gear shift level nor dials to change the air-conditioning setting. All of them had to be operated with the press of chunky and square buttons. Granted, the concept was futuristic — but utilizing buttons instead of switching to a touch screen was somewhat ironic.

Furthermore, the less-than-intuitive system took the reporter at least five minutes to figure out without endangering herself or others.

Then the two-hour journey from the Hyundai Motor Studio to a café near Bukhansan in Goyang, Gyeonggi began and satisfaction finally set in. The ride was surprisingly comfortable and especially stress-free given the newly added driving-assist functions.

Whenever changing lanes with a turn signal, one of the most challenging moments, especially on Seoul’s congested roads, occurs when a monitor appears on the digital dashboard that provides a camera feed of the blind spot. In this case, the visuals were provided by cameras on each of the side mirrors.

Along with help from a heads-up display reflected on the windscreen upfront, the routine of going back and forth between rear-view mirror, side mirrors and navigation screen was dramatically simplified. In fact, the driver barely turned her head while driving. 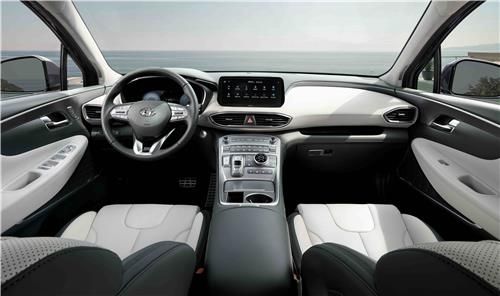 
Another noticeable feature was its lane-following assistance (LFA) function, which was a new addition to the facelifted vehicle. Even when driving fast, the car adjusted the steering wheel by itself when it sensed that another car was veering away from the lane’s center. The function was especially helpful when driving on a winding highway when the car is easy to oversteer. At one point, both hands were taken off the steering wheel, and the new Santa Fe managed to navigate the winding course smoothly on its own.

Although a midsized SUV, the Santa Fe might feel fat for some drivers when it comes to parking, especially since most of Seoul parking spaces are minimalist.

Hyundai Motor added the Remote Smart Parking Assist (RSPA) function to the facelifted SUV, although it is not as advanced as a parking-assist program installed in more expensive Nexos and Genesis GV80s.

While Nexos and GV80s can make turns on their own while parking, this Santa Fe is only able to go forward or backward. With a press of a button on the car key, the vehicle went ahead or in reverse with the driver outside the car while halting when approaching obstacles.

The gauge display showed that the car drove at a fuel efficiency of 15 kilometers per liter when the course finished. The official figure is 14.2 km/l. 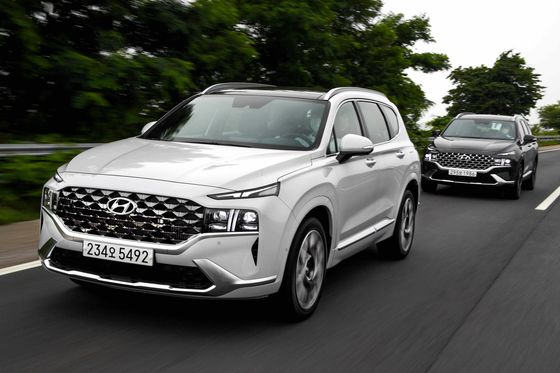 
All-in-all, the Santa Fe SUV definitely has more character with an upgraded design and smart features. By incorporating headlamps on each side of the radiator grille, the car seems wider compared to the previous version, hence producing a more robust look. Whether that is an improvement or not is up to the customer.