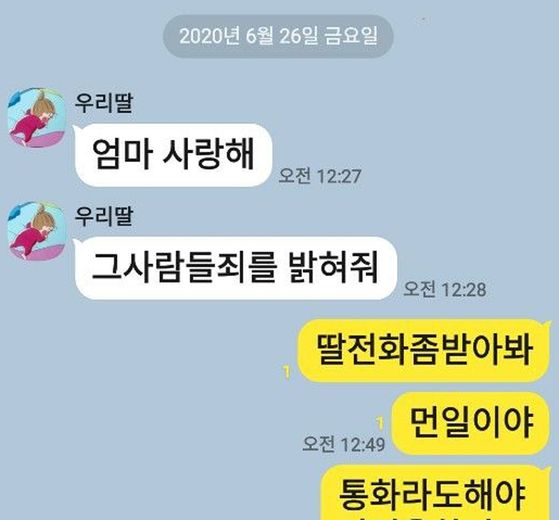 The last KakaoTalk message sent to her mother by Choi Suk-hyeon, a Korean national triathlete, who was found dead on June 26. [SCREEN CAPTURE]


The suicide of a 23-year-old triathlete from the Korean national team who endured years of systemic abuse and assaults is prompting a public outcry.

Choi Suk-hyeon, a junior women’s triathlon medalist, was found dead outside her team dormitory in Busan on the morning of June 26. She left a haunting last text message to her mother that day.

“Mom, I love you,” she wrote in the KakaoTalk message released to the public by her family last Wednesday. “Reveal the sins of those people.”

Her mother texted back: “Daughter, please answer the phone. Did something happen?” But the mother's text messages remained unread.

Choi was a rising star. She became a member of the junior national triathlon team in 2015 and moved onto the national team in 2018. However, that same year, she took time off for psychological reasons.

After Choi's death, her family released journal entries, voice recordings and her last KakaoTalk message, which suggested years of verbal abuse and physical assault at the hands of her coach, team doctor and senior teammates.

Former teammates have also come forward to the media since to recount the abuse they and Choi suffered from.

According to the former teammates, as far back as 2016, Choi suffered from “food torture” from the coach and team doctor, who verbally abused her for having gained weight. They forced Choi and two other teammates to eat 200,000 won worth of bread as punishment.

A former teammate said, “We were forced to keep eating bread until all three of us vomited. The coach cursed at us and pushed bread into our mouths.”

But she said that the team doctor and other senior athletes didn’t say anything and only watched.

Choi’s journal entries recount the stress and mental anguish she felt as a teenage athlete and indicated that the abuse and assaults continued for years.

In March 2019, during an exhibition event in New Zealand, the coach and team doctor were said to have hit Choi on the head and stomach because she secretly ate a peach.

According to a 20-minute voice recording obtained by the JoongAng Ilbo on Wednesday, two people believed to be the coach and team doctor are heard screaming and cursing at Choi, asking her, “Do you want to die?” and telling her to “clench your teeth tight," followed by thudding sounds assumed to be Choi being beaten.

A former teammate who witnessed the incident said that four athletes were called to the dormitory and smacked on the head and kicked in the stomach. She said that the team doctor did most of the hitting and the coach “looked on laughing.”

The former teammates said that two senior athletes who were members of the national triathlon team habitually bullied Choi.

A team member said, “I often saw the two senior athletes assault and curse at her.”

Choi’s family said that Choi was even forced to pay various fees without knowing the exact purpose. And while Choi made multiple attempts to blow the whistle, filing complaints with the Korean Sport & Olympic Committee on April 8 as well as with the Korea Triathlon Federation, she never received a proper response.

She filed criminal complaints against four people: the coach, team doctor and two senior teammates of her former Gyeongju city team from 2017 to 2019, for verbal abuse and violence.

The Daegu District Prosecutors’ Office is currently investing the case.

Choi's suicide has elicited outrage from lawmakers, the public and even the president.

Rep. Lee Yong of the United Future Party and a member of the National Assembly’s culture and sports committee — who is also a former Korean national bobsled team coach — in a press conference Wednesday called for “a thorough investigation and serious punishment for the assailants.”

At least five separate Blue House petitions calling for justice for Choi have attracted tens of thousands of signatories since Thursday.

President Moon Jae-in on Thursday ordered the Ministry of Culture, Sports and Tourism to strengthen the protection of athletes’ rights.

The Sports Ministry said that it will work toward revealing the facts of this case and “make the utmost effort to prevent a similar case in the future.”

The ministry formed a special investigative team, headed by Second Vice Minister Choi Yoon-hee, to look into the allegations made by Choi.

The Gyeonggju Sports Association opened a disciplinary hearing Thursday, and Choi’s former coach, surnamed Kim, denied all abuse allegations made against him.

“The federation views this accident very seriously,” he said, promising that following the recommendations of an independent panel, the federation will take “speedy and stern measures.”

Choi’s former teammates are scheduled to hold a press conference Monday to share stories of Choi being assaulted as well as their own experiences of abuse.

The Korea Triathlon Federation is also set to convene an independent panel Monday to examine the allegations made by Choi and her family.

In one journal entry shared by her family, Choi wrote, “Today is a rainy day. I was beaten to dust.”

If you or someone you know are feeling emotionally distressed or struggling with thoughts of suicide, LifeLine Korea can be contacted at 1588-9191. The Seoul Global Center offers English-language counseling, contact 02-2075-4180 to arrange a session. Other international helplines can be found at www.befrienders.org. 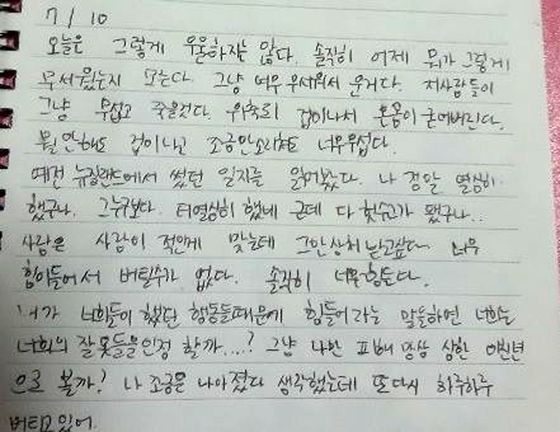 A journal entry left by Choi Suk-hyeon, a Korean national triathlete, who records her depression and anguish for years having suffered from abuse and assault from her coach, team doctor and teammates. [CHOI'S FAMILY]