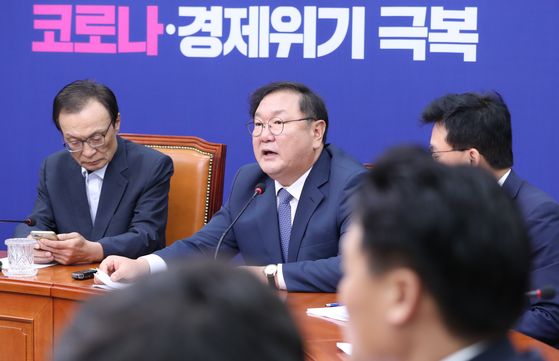 “We will quickly push through the necessary legislation to stabilize housing prices,” Kim said during a party meeting. “We will [also] review actions that would increase the comprehensive real estate tax [for some residence owners] by reducing various deductions.”

Kim said the party would also consider measures that would help people trying to purchase their first apartment.

Moon reportedly told Kim to help push legislation that raises the comprehensive real estate tax in a way that would encourage multiple homeowners to sell some, increasing the supply of residences.

But apartment prices continued to rise.

Government regulations have limited the supply of apartments in Seoul as well as neighboring Gyeonggi and Incheon — a move that has also hiked up the price of jeonse, or residences rented on long-term deposits.

The maximum limit for increases in the tax compared to the previous year was also raised from 200 to 300 percent.

However, these changes were not passed by the last National Assembly.

Moon is hoping to push the new tax rates through the National Assembly to be effective next year.

According to the Blue House, Moon told Land Minister Kim last week to come up with a way to increase housing supplies.

The Moon administration and the Democratic Party, which won a landslide in the April general elections, have faced heat from the public over rising apartment and jeonse prices. Meanwhile, people who were hoping to move into reconstructed apartments are facing stricter regulations including jeonse loan borrowing limits.

“Eradicating real estate speculation by strengthening the comprehensive real estate tax shows a failure to understand the basic logic of taxes,” Kim said. “If you raise comprehensive taxes, single apartment owners that have nothing to do with speculation will be penalized. And those who own multiple homes will pass on the increased tax burden to their tenants.”

He said real estate policies centered on taxes may work temporarily but in the long run won’t have an impact.