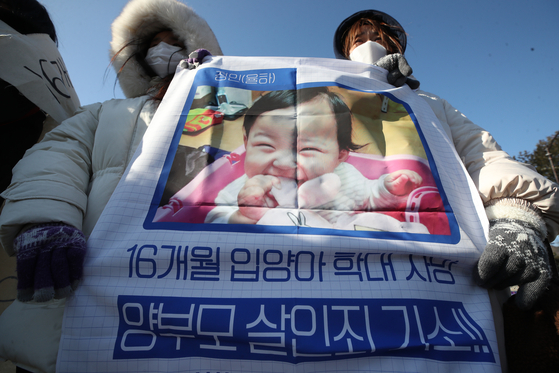 Activists hold a rally outside the Blue House to demand the adoptive parents of a toddler named Jeong-in be indicted and punished for murder, not involuntary manslaughter by child abuse. Jeong-in, a 16-month-old girl, died in October only nine months after she was adopted. An autopsy showed that she had endured brutal violence. The police also faced criticism for not responding to three suspected child abuse reports about Jeong-in. [YONHAP]


Lawmakers rushed to change the country’s laws to prevent child abuse, following public outcry after the tragic death of a 16-month-old girl at the hands of her adoptive parents’ violence and the state’s failure to respond to repeated reports of suspected maltreatment.

At the last voting session of the extraordinary session on Friday, the National Assembly passed a package of 18 bills intended to prevent child abuse. The lawmakers reviewed the bills for just three hours on Thursday at a subcommittee of the Legislation and Judiciary Committee, and the voting took place on Friday afternoon.

The changes were made after an investigative report by SBS on Jan. 2 reported that the toddler named Jeong-in died in October, just 271 days after she was adopted by a family in southwestern Seoul. She was allegedly abused for months, but the police did not separate her from the family despite three reports of suspected child abuse in May, June and September.

One of the major changes to the laws made Friday was removing a clause that has long been considered as a legal ground that justifies parents’ corporal punishment of their children. The lawmakers removed Article 915 in the Civic Act, which stipulates that “the person of parental authority may, in order to protect or educate his or her child, take necessary disciplinary action against the child, and may entrust such child to a reformatory or correctional institution upon the approval of the court.”

The government submitted a bill to delete the article, and lawmakers approved the change. The government has said it wants to make clear that corporal punishment, even by a parent, is illegal.

The National Assembly also approved a series of revisions to the law governing the punishment of child abuse crimes. According to the changed law, the police or the public servants in charge of child protection must immediately start an investigation when a report of suspected abuse is filed by those required to do so, such as day care center employees or medical professionals.

The change was made as the police had dismissed the three reports of suspected abuse based only on Jeong-in’s adoptive parents’ verbal statements.

The suspected offender and the victim must be investigated separately, the revision said. A protective measure for witnesses was also created.

The revision also increased the fine for obstructing an investigation of suspected child abuse. As of now, such crime is punished by up to five years in prison or a maximum fine of 15 million won ($13,700). The lawmakers changed the law to increase the fine to a maximum of 50 million won.

A proposal designed to heighten the punishment for a child abuse offender, however, was not advanced to the voting session, as the subcommittee of the Legislation and Judiciary Committee did not pass it on Thursday. As of now, a child abuser can be sentenced to a maximum of five years in prison, if the victim dies from the offence. Rep. Noh Woong-rae of the ruling Democratic Party (DP) submitted a bill earlier this month to double the sentence.

At the subcommittee, lawmakers agreed that it requires more discussion.

“Experts including the Korean Women Lawyers Association were negative about the change, and many lawmakers also wanted to take more time to think about the change,” said Rep. Back Hye-ryun of the DP, a member of the subcommittee. “Concerns were raised that it would be harder for the prosecutors to prove their case in a trial if the maximum sentence is higher, because the court will inevitably demand more evidence. And it is hard to obtain testimonies from a young victim even now, and there can be more attempts to conceal the abuse.”

“Parents who abuse their children don’t think they must not do so because the punishment is heavy,” said Professor Lee Yung-hyeok of the Police Science Department of Konkuk University. “When the public demands a strong punishment against an offender, the easiest way is increasing the sentence. But what we need is an improvement in the system that failed to protect the child.”

“I agree with the argument that a child abuser must be punished heavily, but changing the law to heighten the sentence does not necessarily help the victim,” said Kim Ye-won, a lawyer. “When the sentence is heavy, an accused does his or her best to deny a charge, and the prosecution’s burden to prove the case increases.”

A plan to separate a child from a parent immediately after two reports of suspected child abuse was also not approved, because the lawmakers said the seriousness of the case cannot be determined by the number of reports.

Of the 18 bills passed Friday, 11 were submitted from June to December last year, but lawmakers only deliberated over them on Thursday. The remaining seven were submitted within three days of the SBS report on Jeong-in’s death on Jan. 2.

Experts expressed concerns about rushed deliberation and passage of the bills. “These hastily introduced laws will only worsen the chaos in the field,” lawyer Kim said.

She said the country does not have enough shelters, but the lawmakers changed the law so that a suspected child abuse victim must immediately be separated from the alleged offender. She urged that more shelters be built and a more thorough evaluation process for separation is introduced before implementing the change.

Professor Lee said the police deserve criticism for its inaction in Jeong-in’s case, but the country needs a legal system that protects the police who proactively respond to a child abuse case. “There is a significant number of police officers who faced lawsuits after proactively taking measures to separate children from abusive parents,” he said.

Kong Hye-jeong, head of the Korea Child Abuse Prevention Association, criticized the lawmakers for trying to use the tragedy of Jeong-in for their political gain. “They should have asked child protection and welfare services workers about what changes are necessary before submitting the bills,” she said. “They are just rushing to include their names in newspaper articles before this tragedy is forgotten by the people.”