Daejeon authorities said they were able to draw a link between cases in Daejeon and the country’s most populous region of Seoul, Incheon and Gyeonggi after studying the virus strains of patients in both areas, which turned out to be a GH.

GH is one of six main strains of the new coronavirus classified by the World Health Organization. The Korea Centers for Disease Control and Prevention (KCDC) said Monday that the GH strain was currently “leading the outbreak” in this country, in part because it transmits to other people three to four times more easily than do other virus strains detected earlier in Korea.

Daejeon officials did not specify exactly which cluster in the Seoul metropolitan area led to the city becoming a new hotspot, but mentioned that the clusters in nightclubs and bars in Itaewon, the distribution center of e-commerce company Coupang in Bucheon, Gyeonggi, and a string of churches in Incheon were all tied to the GH strain, according to recent genome sequencing data.

Ongoing contact tracing of patients who were diagnosed with the coronavirus early on in the Daejeon cluster also showed they frequently visited the Seoul metropolitan area and had close contact with people in those regions, officials said.

At least 97 people have tested positive in Daejeon from June 15 to Tuesday, 60 of whom are believed to be traced to an array of door-to-door sales businesses in the city which is located 87 kilometers (140 miles) south of Seoul.

KCDC Director Jung Eun-kyeong said in a Monday press briefing that a larger cluster in Gwangju, encompassing at least 92 patients, was also associated with the GH strain, implying Gwangju cases were also linked to the Seoul metropolitan area.

Jung said the virus strain appears to have come from abroad “when many people entered [Korea] from Europe and the United States in March and April.”

Genome sequencing procedures on 526 patients in Korea over the past several weeks showed 63.3 percent were infected by a virus of the GH strain, 24 percent by the V strain and 6.3 percent by the S strain.

The KCDC said that the most prevalent strain in Korea at its peak — when daily cases soared up to three-digit figures in mid-February after a huge cluster was found at the Shincheonji Church of Jesus in Daegu — was the V strain. Ever since first being discovered in Europe though, G, GH and GR strains are said to be the most widespread variants in the world now. 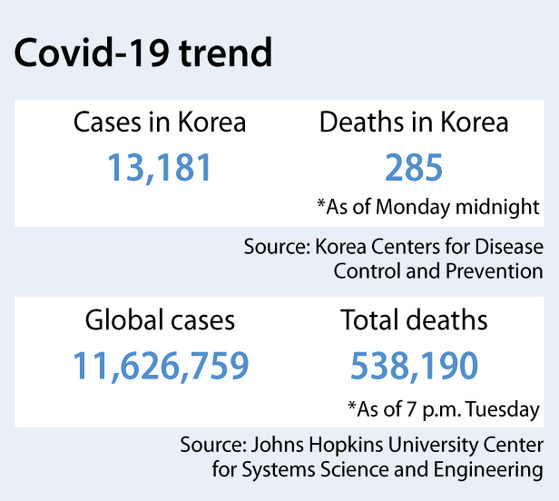 Across Korea, 44 people were newly diagnosed with the coronavirus Monday, the KCDC revealed Tuesday morning, bringing the country’s total case load to 13,181. Among those new patients, 20 were infected domestically and 24 infected abroad.

Of the 20 domestic cases, seven were in Gyeonggi, six in Gwangju, three in Seoul and two each in Incheon and Daejeon. Among the 24 imported cases, 13 were from Kazakhstan, three from the Philippines and one from Pakistan. Six other cases were from the Americas and one from Europe, KCDC data showed.

As of Monday at midnight, 285 people had died, up by one from the previous day, while 11,914 people had been declared fully recovered, up by 66 from the day before.

The cluster in Gwangju, 268 kilometers south of Seoul, has been traced to the Gwangreuk Temple, where visitors contracted the virus in late June and subsequently transmitted it throughout their respective social circles, including in churches and a sauna.