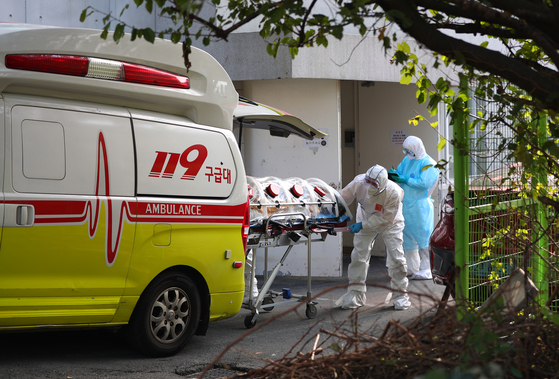 A coronavirus patient at a hospital for senior citizens in Busan gets transferred to a different hospital Wednesday after developing severe symptoms. At least 53 Covid-19 cases have been traced to the Busan hospital, making it the largest cluster the city has seen. [YONHAP]

Starting next week, some 160,000 people who work at or recently visited nursing homes, mental hospitals and hospitals for senior citizens in Seoul, Incheon and Gyeonggi will be tested for the coronavirus, central health authorities said Thursday.

The announcement came as the Korea Disease Control and Prevention Agency (KDCA) said the nation added 110 new infections Wednesday, up from 84 cases the day before.

Almost half of Wednesday’s cases came from a hospital for senior citizens in Busan, named Haeddeurak, the largest cluster Busan has seen to date. No new cases were added to the Haeddeurak cluster Thursday, which remained at 53.

To prevent a similar cluster from arising in other parts of the country, health authorities Thursday said they would look into nursing homes, mental hospitals and hospitals with senior citizens in the greater Seoul area to check whether any coronavirus infections had gone unnoticed, namely asymptomatic cases.

During that process, health officials will decide whether such an “all-out inspection” is effective enough to carry out in other regions as well, said Sohn Young-rae, an official at the Central Disaster Management Headquarters.

Sohn said in a Thursday press briefing that testing in the greater Seoul area will likely begin no later than next week on roughly 130,000 workers and 30,000 recent visitors.

People who are hospitalized in those facilities will be exempt from the coronavirus tests, he said, because they had already been tested before admission. Testing them again would add too much of a burden to local government offices that will have to administer the tests, Sohn added.

“On the other hand, workers and visitors come and go every day, [using] the facilities and [blending into] local society,” Sohn explained, “so our goal is to pre-emptively run an overall test to see whether there are any hidden infections, and if so, how large they are, and block those cases from leading to any community spread.”

Sohn said it will take an “extremely long time” to test 160,000 people, stressing cooperation from local government offices will be crucial. 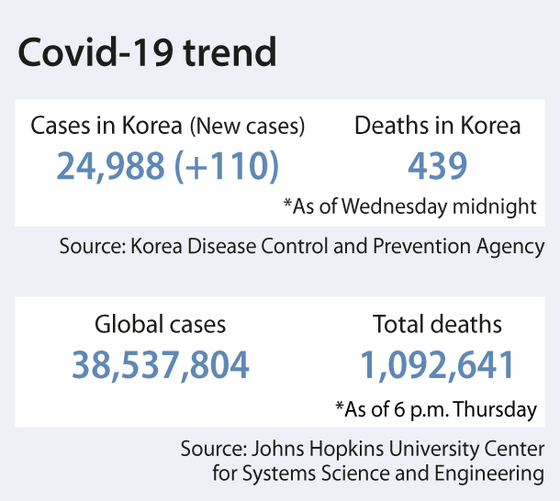 In Busan, health officials said they would separately test all workers in the city’s care facilities for older people as a precaution. The cluster at Haeddeurak already seems to be subdued, but Busan officials voiced concerns about possibly seeing more infections in the coming days as workers and patients there go through isolation.

The virus is known to have an incubation period of 14 days.

A patient who had been hospitalized there before testing positive for the coronavirus this week died at 4 a.m. on Thursday, bringing total deaths linked to the cluster to two. The first patient to have died in the cluster was posthumously diagnosed with the coronavirus Wednesday, after dying on Monday morning.

Among 110 people who tested positive for the virus Wednesday across the nation, 54 were in Busan, 22 in Seoul, 11 in Incheon, six in Gyeonggi and one each in Daejeon and Gangwon, according to data from the KDCA.

There were 15 imported cases, nearly half the previous day: two each from Uzbekistan, the United States and Myanmar and one each from the Philippines, Russia, India, France, Ukraine, Canada, Brazil, Egypt and Moldova.

One person died Wednesday, raising total deaths to 439, while 52 patients recovered, bringing total recoveries to 23,082. As of Wednesday at midnight, there were 24,988 coronavirus patients in all.

Virus clusters in Korea have largely come under control now with social distancing measures set at Level 1. The last major cluster the country saw was in mid-August from the Sarang Jeil Church, a politically controversial Presbyterian church in Seongbuk District, central Seoul. Three days after the first case in the church community arose on Aug. 12, a large-scale anti-Moon Jae-in rally was held in Gwanghwamun Square, downtown Seoul, on Korea’s Liberation Day, a national holiday.

Health authorities believe the church cluster led to the rally cluster, as hundreds of worshippers were later found to have participated in the street demonstration, flouting government warnings to stay home and self-isolate.

The Sarang Jeil Church cluster led to some 1,200 cases, while the Liberation Day rally cluster led to nearly 600. The biggest cluster Korea has ever seen to date emerged from the Shincheonji church in Daegu last February, to which some 5,000 cases have been traced, nearly one-fifth of the country’s current entire case load.