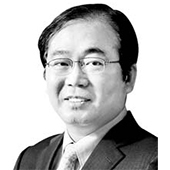 
Korea is a politically underdeveloped country governed by an imperial president. The grand principle of “a democratic republic with three branches of power” has been asleep for over half a century as one person controls the country. This absurd gap is a disgrace to the people.

A new tsar in the 21st century, surrounded by people intoxicated by the sweetness of power, does not realize he’s a lame duck until the last moment. The blade of absolute power that can inflict fatal injuries on political enemies, is turned back and stabs its owner. No president went against the solemn law of causality. Can President Moon Jae-in be an exception?

Park Chung Hee disabled the Constitution, suffocated democracy and reigned as a dictator for 18 years. But he understood the essence of the presidency was to focus on the interests of the people. He was presidential until the end. On Oct. 22, 1979, when his former minister Shim Ui-hwan died of liver cancer, Park sent a handwritten letter to his wife. He wrote that he could not help but feel sad and emotional. It was a day before he was shot and killed by his intelligence chief Kim Jae-kyu.

In 1972, President Park wrote several times to Lho Shin-yong, Korea’s consul general in New Delhi, as he was struggling in India, a battleground of third-world diplomacy with non-allies. Lho, who later became a prime minister, told me that the president asked him to do his best as things were difficult since North Korea was powerful. Lho said he renewed his own determination after perceiving the agony of the president of a small country in the traces of writing and erasing. Despite South Korea’s relative inferiority in strength, both Koreas successfully established relations in December 1973.

President Moon replied to a letter from the son of a South Korean fisheries official killed by North Korean soldiers. In his typed letter, Moon said it pained him to read the letter and that he would personally make sure the truth was revealed. But a brother of the murdered man said he felt disrespected as the letter was not handwritten. It was typed on a computer with no handwritten presidential signature on it.

The Blue House explained that what mattered was the content — not the mechanics of the printing — adding that it was customary to send a typed letter to outsiders. President Park would have been different. While exercising nearly unlimited power, he understood that there was another person at the other end of his communications. He had a philosophy on the essence of power and the presidential position. People know the difference.

Before the 2017 presidential by-election, Moon declared he was starting afresh as “a politician unlike politicians.” I could see his negative perception of politics. Moon misunderstood the essence of politics. A politician is not a clergyman pursuing sacred justice and ethics. In fact, politics is the act of jumping into the mud of paradox and chaos and getting oneself dirty. It’s an act of existential salvation to step toward a better world together.

Power — a politician’s weapon — is violence to move others as he or she wishes. Therefore, a politician is only forgiven when good outcomes are produced. That’s why politicians need to listen to criticism from rivals and even make a deal with the devil. A “politician unlike politicians” who refuses this cannot be good at politics.

Probably due to this gap, a serious problem arose in the operation of presidential power in this country. Even when an unarmed civilian went adrift to North Korea, was shot and burned by the North Korean military, the president did not protest. Consoling the bereaved family with a printed letter does not help clear their anger and grief.

The Blue House staff is involved in corruption and illegality. Kim Bong-hyun, actual owner of Lime Asset Management, wrote in a text message that he had “connections with the presidential secretaries for civil affairs and political affairs.” Liberal critic Chin Jung-kwon said the most corrupt place in Korea was the Blue House. President Moon ordered a probe into the case — as if he had nothing to do with it. Then who is responsible for leaving the special inspector’s position in the Blue House aimed at preventing corruption of those close to the president vacant for three years?

The Board of Audit and Inspection (BAI) head Choi Jae-hyung complained that he had never seen such strong resistance as he looked into the government’s nuclear phase-out project. A drastic change is needed. Incompetent bureaucrats and officials are rampant. Misrule and corruption has crossed the line. Moon must go beyond the abstract ideological boundary. If this continues, he cannot be free from the causality principle of the curse of the imperial presidency.