Actors and directors for crossover sci-fi project "SF8" attended the press event in CGV Yongsan branch in central Seoul on Wednesday to introduce their stories. [NEWS1]


Due to the surge in demand for over-the-top platforms, the barrier between television, streaming service and cinema is merging.

The cinematic experience is no longer only accessible at movie theaters as the advancement of technology has enabled audiences to recreate it on smaller screens.

And with this technology, the industry is finally venturing into a genre that has been long avoided— science fiction.

Due to the pressure of providing visual effects that exceed people’s expectations, which comes with huge risk considering the costliness, the genre has been shunned by the local industry.

But now, the first-ever sci-fi blockbuster ”Space Sweepers” is set to be released in theaters in September, along with a highly anticipated sci-fi project set to arrive on the streaming service Wavve and MBC broadcast very soon. 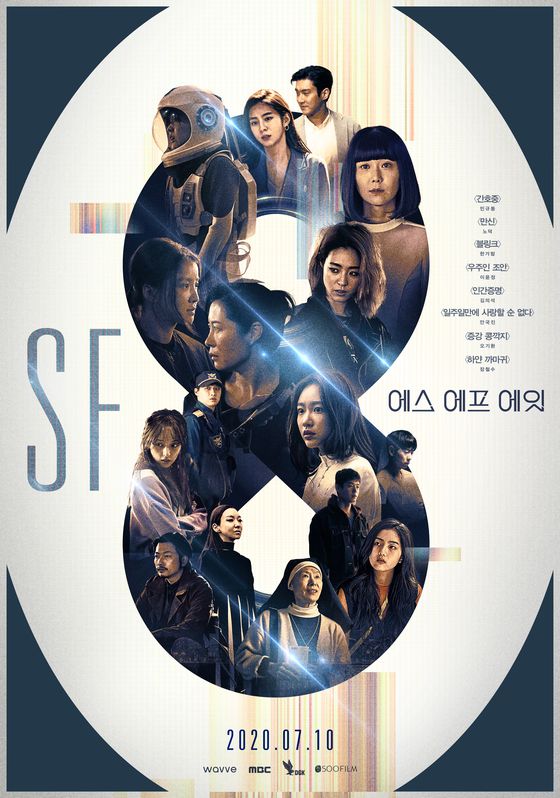 
“SF8” is a crossover project between Wavve, MBC broadcast, Directors Guild of Korea (DGK) and film production company Soo Film. In eight episodes, eight directors from DGK came together to depict their own versions of what the future looks like using technology such as artificial intelligence (AI) and virtual reality (VR).

“MBC CEO Choi Seung-ho came by our guild as a director to suggest a collaborative project,” director Min Kyu-dong, and the DGK representative who oversaw “SF8,” said at a press event in CGV's Yongsan branch in central Seoul on Wednesday. “From last year I was contemplating what we could create together and thought of sci-fi. The genre nowadays is strongly imprinted as something that’s daunting and difficult [for local filmmakers to try out], and is thought to be monopolized by Hollywood films. Through this opportunity, we wanted to become pioneers setting the course of telling new stories without any limitations and also get an opportunity to meet a new audience [through Wavve].”

Min directed one of the eight episodes, titled “The Prayer,” about an AI caretaker who struggles between taking care of her designated patient and the patient’s guardian.

“The total production cost [for the eight episodes] was less than that of a budget for a small commercial film,” Min said. “There were those who would say that this challenge was too far-fetched. But I think the filmmakers were generally happy telling stories that they’ve wanted to tell without any barriers.”

“The creative freedom was much less restricted compared to commercial films,” director Roh Deok added. “In films, there are many, many interests involved starting from the script-writing process which may not be able to 100 percent support the filmmakers’ creativity. But for this project, the directors were free to do whatever they wanted to do. So despite the tight budget and schedules, I think directors found new possibilities and enjoyment in areas that they did not expect.”

Although each story portrays different futures using different topics, the overall theme of the eight episodes is humanity.

“One of the stereotypes about sci-fi is that creators have to offer some kind of amazing visual spectacle,” Min said. “But when looking at various high genres [amongst sci-fi], there are films that ask fundamental but philosophical questions. [The audience] may find it awkward or alien to see an Asian face in sci-fi, but I think this attempt is a trial-and-error process that we must eventually pass through. We have done our best given our limited budget, and we may be compared to big-scale western films, but this was our own challenge which I believe should be categorized separately [from those films]. But we will accept [criticism] on points that we should, and it’s something that we should do so joyfully despite our worries and fears.”

When asked for his thoughts about anticipation that “SF8” will be the local equivalent of Netflix series “Black Mirror,” Min pointed out that “SF8” will offer more diversity, having stemmed from the inspirations of eight different filmmakers.

“The only rule in this game was to find a new kind of visual [that no one has seen before],” Min said. “I believe the directors had a hard time inputting that into their work, but there was also this strange kind of pleasure and happiness creating works about disasters while experiencing one simultaneously.”

Each episode is about 50 minutes long and the eight episodes will be released exclusively on Wavve on July 10 and aired on MBC from Aug. 17.