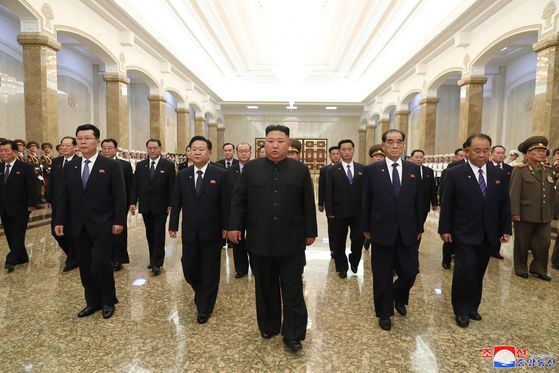 Flanked by the highest officials of his regime, Kim Jong-un’s visit to the Kumsusan Palace of the Sun, where Kim Il Sung and his son Kim Jong-il are laid in state, took place on the 26th anniversary of Kim Il Sung’s death in 1994.

In April, when the country celebrated Kim Il Sung’s birthday, its most important public occasion, Kim Jong-un defied precedent by failing to pay respects to his grandfather or even appearing before the public.

This sparked immense international speculation on the dictator’s health, including some reports alleging he was gravely ill or even brain dead.

Those rumors were dispelled on May 1, when Kim appeared looking ostensibly well at a ribbon cutting ceremony for a fertilizer factory. Since then Kim has kept a relatively low public profile, refraining from field trips or attending public events.

Part of that inactivity may be owed to the coronavirus epidemic, which in spite of Pyongyang’s official denial of any cases, has put the regime on high alert. According to the Minju Choson, the principal newspaper of the North’s cabinet and legislative presidium, on Tuesday, the country has recently imposed a “complete lockdown” of its air, sea and land borders — marking an escalation in quarantine measures after the regime somewhat loosened its border controls with China in March.

During the rare occasions at which Kim has emerged in the past weeks, his actions have resulted in major consequences.

Most recently at a Central Military Commission meeting in late June, he slammed the brakes on action plans laid out by the country’s military targeting South Korea, ramping down on a series of escalations ordered by his younger sister, Kim Yo-jong.

Kim’s decision to attend Wednesday’s tribute signals to Washington an intent to keep faith with his uncompromising “breakthrough” strategy to defeat sanctions, overlapping with Biegun’s visit to Seoul, where he was expected to hold talks with South Korean officials on reviving nuclear discussions with Pyongyang.

In the past week, two successive statements laid out by North Korean foreign ministry officials ruled out the possibility of future dialogue with the United States, including a summit with U.S. President Donald Trump.

The mausoleum visit also highlighted some power dynamics in the regime’s leadership.

According to the state run Korean Central News Agency (KCNA), Kim was accompanied by the regime’s No. 2 figure, Choe Ryong-hae, and key economic officials like Pak Pong-ju and Kim Jae-ryong.

Occupying the fifth most important seat during the ceremony was Vice Chairman of the Central Military Commission Ri Pyong-chol, a former air force general who is believed to have spearheaded the North's nuclear arms development.

Ri’s elevated profile suggests Pyongyang intends to continue focusing on strategic arms development and a nuclear deterrence given that diplomatic negotiations with the United States have been mired in unbridgeable disagreements.