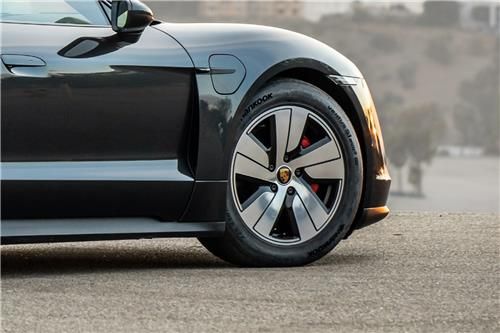 Hankook Tire has supplied the high-performance Ventus S1 evo 3 SUV tires for Porsche's quickest electric sedan in the form of original equipment (OE) tires since the first half of 2019, the company said in a statement.

The company didn't provide an exact time frame for the supply deal or the value of the deal.

The tiremaker has supplied OE tires to Porsche's crossover SUV Macan since April 2015 and Cayenne SUV since June 2019, proving the quality of its tires in the global market.

Supplying OE tires to car manufacturers does not generate much revenue for tiremakers, but securing big companies as clients helps improve their brand image and can lead to the raising of product prices down the line.

For tiremakers, it is more profitable to sell replacement equipment (RE) tires in after-sales markets.

To enhance its global brand image, the tiremaker has shipped products to nearly 50 foreign carmakers, including Audi, BMW, Mercedes-Benz and Porsche.

In the January-March quarter, its net profit plunged 34 percent to 81.28 billion won ($66 million) from 123.23 billion won in the same period of last year due to the coronavirus impact on global tire demand for vehicles and tire production at the company's overseas plants.

Hankook Tire earns over 80 percent of its total revenue from abroad. It has eight plants — two in Korea, one in Hungary, one in the United States, three in China and one in Indonesia — whose combined capacity reaches 102 million tires.