As the summer vacation season nears and the European Union is starting to open its borders again, the tourism industry is coming up with creative ways to alleviate health concerns for customers seeking a summer escape.

Hotels are introducing new systems to allow guests to stay while keeping their distance.

Paradise City, a hotel and resort located on Yeongjong Island in Incheon, has introduced a digital check-in service to minimize contact between staff and guests. Visitors can immediately receive their keys after checking in through their smartphone using a link sent by the hotel. 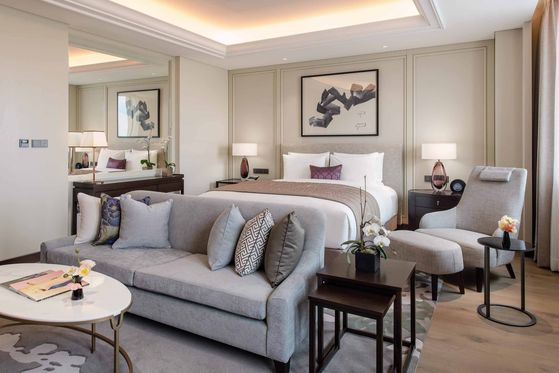 A premium deluxe room at Paradise City in Incheon. Hotels are putting extra care into disinfecting facilities to attract customers planning a staycation for the summer holidays. [PARADISE CITY]


The hotel has also increased cleaning. Public facilities, including pools, saunas and fitness centers, will be disinfected by a disinfection service company three times every day. Paradise City partnered with Cesco for the service, making it the first five-star hotel with a disinfection service company stationed inside the hotel. For the kid’s zone, the resort company will use a special disinfectant developed for kids.

Paradise Hotel in Busan formed a unit of 10 employees from different departments that keep track of guests’ movements and ensure the hotel is kept disinfected. The hotel uses Rely+On Virkon from JW Pharmaceutical, the only disinfectant produced locally that has been proven to be effective against the coronavirus.

Millennium Hilton Seoul, in Jung District, central Seoul, established its own disinfection system with Mayo Clinic in the United States and Reckitt Benckiser in Britain. The hotel says it is using the same disinfection items and protocols as a medical facility to clean its rooms, restaurants and fitness centers. The company is applying the same system to 6,100 Hilton hotels across 18 countries.


The airline industry is increasing services that minimize contact after the EU started opening its borders to Korea and 13 other countries starting July 1. 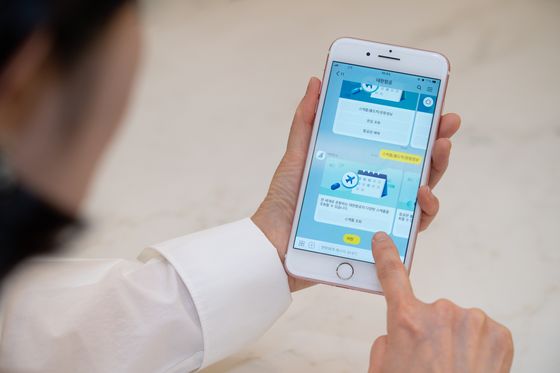 
Korean Air launched an artificial intelligence-based chatbot service that answers inquiries about airline schedules, flight information and mobile check-in services. Korean Air said it has been compiling data since 2008 to develop the service.

Passengers will be allowed onto planes in order of seat, from back to front, and this will be strictly controlled. The only exception will be passengers with toddlers and elderly and disabled people, who will be the first to be seated.

Jeju Air has changed its seating layout to keep each passenger at a social distance. If the plane is emptier than usual, all passengers will be seated on either the window or aisle seat. Groups with more than three people will be seated either in the same row or in two rows, but the airline will leave the rows in front and behind the group empty.

Singapore Airlines has strengthened its health protocols after getting advice from health officials, the government and customers. All planes will be sprayed with disinfectant and cabin air will be ventilated every two to three minutes. Restrooms have also been changed to minimize the chance of infection spreading, and some planes will be disinfected with ultraviolet lights.

While the European Council has recommended member countries lift travel restrictions, that does not mean every country in the trade bloc will allow entry. Each country has different qualifications for visitors, something worth checking for those planning a trip overseas.

At the moment, the easiest country to visit in Europe is the Netherlands. Korean passport holders have been allowed entry into the Netherlands since July 1 without any quarantine. Korean Air operates three direct flights every week to Amsterdam, and Dutch airline KLM operates five.

Greece has opened its borders to travelers, but passengers are obliged to submit papers detailing their visit, and self-quarantine in some cases. Depending on which country a traveler has visited in the last 14 days, the Greek government may require individuals to take a coronavirus test. Tested individuals must quarantine themselves at the addresses stated in their documents until they receive their results.

Croatia has lifted mandatory self-isolation and quarantine restrictions for individuals entering the country. Instead, travelers are given a pamphlet with recommendations and instructions from the Croatian Institute of Public Health that they must follow for 14 days after entering the country.

Switzerland will open its borders to Korean passport holders from July 20.

Germany said it will only allow Koreans into the country if Korea starts doing the same for German passport holders. This means that only Korean nationals with a visa are currently allowed entrance to Germany, after the Blue House temporarily suspended European passport holders from entering Korea without a visa in April.

Italy will open its borders to Korea, but individuals are required to quarantine for 14 days, with the exception of those who will stay less than 120 hours in the country.

Britain is relaxing its quarantine policy for Korean travelers from July 10, waiving its two-week mandatory quarantine.

Visitors are allowed to enter France without a visa if they plan to leave in the next 90 days.

Korean passport holders have been allowed to travel to Sweden for any purpose including tourism since July 4. Sweden does not have any quarantine rules in place. The same is for Denmark, where short stays for less than 90 days from Korea do not require a visa.

Belgium and Austria will maintain their stance and ban entry. Hungary said it will keep its borders closed to visitors from non-EU countries.