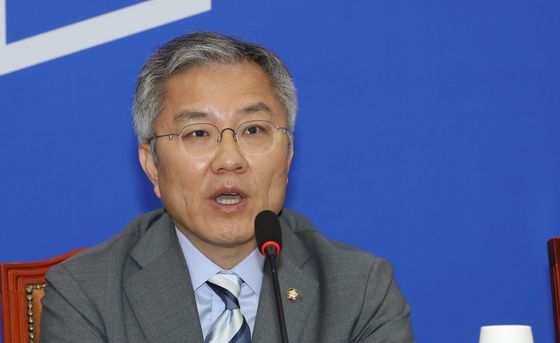 
Opposition politicians on Thursday claimed that Rep. Choe Kang-wook, chairman of the Open Minjoo Party and a former presidential aide, was behind the justice minister’s campaign to undermine the prosecutor general.

“We have evidence that a draft of Justice Minister Choo Mi-ae’s statement was handed over to someone who had no authority before it was publicly released,” said Rep. Joo Ho-young, floor leader of the main opposition United Future Party (UFP), during a party meeting. “We need the entire truth about how Rep. Choe was able to obtain the draft.”

Tensions between Justice Minister Choo and Prosecutor General Yoon Seok-youl spiked last week when Choo made a rare order to Yoon to guarantee greater independence to district prosecutors who are investigating one of his key associates. After a week of deliberation, Yoon announced Thursday morning that he had no choice but to obey her order.

The post was a draft of Choo’s statement pressuring Yoon on the issue one last time. Later Wednesday night, Choo issued a statement telling Yoon to comply with her order, but the language was slightly different from the draft that Choe had posted earlier.

Because Choe was quoting a draft that was never made public, speculation grew that he had inside information about the decision-making process of the ministry.

“I have a suspicion that President Moon Jae-in is trying to use someone like Choe to push Yoon out,” Rep. Joo said.

Choe served as presidential secretary for public office discipline from September 2018 until March 2020. He won a lawmaker seat in April as a candidate for the Open Minjoo Party, a proportional representation party comprised of those loyal to President Moon. He became the chairman of the party, which has three lawmakers, in May.

Jeju Governor Won Hee-ryong said Choe is playing a role similar to that of Choi Soon-sil, the controversial friend of impeached and removed President Park Geun-hye, in relation to Justice Minister Choo.

“The scandal of Choi abusing Park’s power started with a report that she had edited the president’s speeches in advance,” Won said. “If Choo had shared her draft with Choe, who is a criminal suspect, that is even worse.”

Choe was indicted earlier this year on charges of issuing fake internship certificates on behalf of the son of Cho Kuk, former civil affairs senior secretary and former justice minister of the Moon government, to help his law school application.

“Choi worked in the shadows, but Choo and Choe are openly abusing the powers of the state. We are watching a serious crime of abuse of power live.”

The People’s Party echoed the criticism. “Justice Minister Choo is keeping someone who acts like Choi Soon-sil around,” Rep. Kwon Eun-hee said. “The Justice Ministry must lay bare how the draft was leaked.”

As the controversy intensified, the Justice Ministry provided an explanation. “An aide to Choo thought both drafts would be made public, so he released both versions of her statement,” the ministry said.

It, however, did little to convince the critics. “How on earth can a justice minister tell her aide to release two different versions of a statement?” Governor Won asked. “Who is the string-puller behind Choo?”

UFP lawmakers on the Legislation and Judiciary Committee held a press conference around 3 p.m. and urged Choo to conduct an internal investigation about the leak.

They said it was a breach of confidentiality that an official statement of a government ministry was leaked to Choe and others before its announcement.