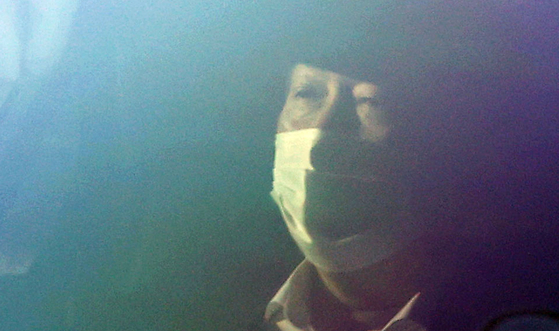 Prosecutor General Yoon Seok-youl, in his car, enters the Supreme Prosecutors' Office in the morning on Monday. [YONHAP]


A group of lawmakers has introduced legislation intended to force Prosecutor General Yoon Seok-youl to resign from his post in the coming months if he wants to start a political career.

Rep. Choe Kang-wook of the Open Minjoo Party on Friday held a press conference at the National Assembly to announce he is submitting a bill to revise the laws governing the prosecution and the judiciary. Under the proposal, prosecutors and judges are barred from running in elections within one year of resigning.

“The people are suffering from unimaginable division in public opinions and the obstruction of state affairs due to the overt political activities of the prosecutor general and some prosecutors,” Choe said. “I don’t think it is normal that an incumbent public servant is being referred as a presidential candidate and that he is not particularly denying the possibility of his running.” 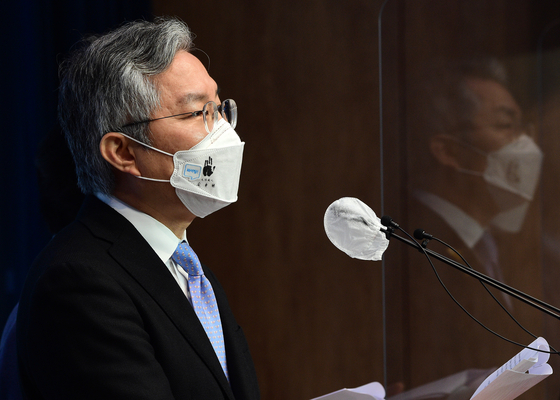 Rep. Choe Kang-wook of the Open Minjoo Party holds a press conference on Friday to announce his bill. [YONHAP]


Choe was referring to Yoon, whose popularity as a potential presidential candidate skyrocketed over the past weeks as he has faced a campaign from Justice Minister Choo Mi-ae to remove him from office.

According to the results of a Realmeter poll released on Wednesday, Yoon was ranked top among potential presidential candidates, with 25.8 percent of the vote. Chairman Lee Nak-yon of the ruling Democratic Party (DP) and Gyeonggi Gov. Lee Jae-myung, also a DP politician, each scored 20.2 percent.

Choe, who sponsored the bill, is a former presidential secretary in the Moon Jae-in Blue House. He resigned from his post on March 16, 2020, just 30 days before the April 15 legislative election.

Choe’s bill was backed by 11 other DP lawmakers who are known to be loyalists of President Moon and former Justice Minister Cho Kuk.

The bill is seen as a more palatable political strategy to force Yoon to resign.

“The more we pressure him to step down, the stronger his image as an innocent victim will be,” a DP lawmaker told the JoongAng Ilbo.

If the bill is passed — and the ruling party has enough lawmakers to pass it on its own — Yoon will have to make a decision for his political future as he navigates the disciplinary process invoked by Justice Minister Choo to push him out.

“There is little possibility that Yoon will step down voluntarily anytime soon,” said another DP lawmaker. “This bill is a way to induce him to resign before March.”

Last month, Choo suspended Yoon from duty, accusing him of of legal and ethical violations, and started a disciplinary process against him. A local court subsequently granted an injunction to Yoon, temporarily lifting the suspension.

The first session of the disciplinary hearing took place on Thursday and the second session is scheduled for Tuesday. Unless the committee clears him, Yoon is expected to take any resulting punishment to court, which would result in a lengthy legal battle against the Moon administration. 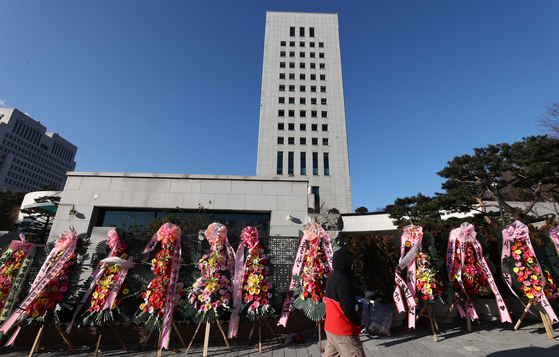 Ahead of the second session of the disciplinary hearing against Prosecutor General Yoon Seok-youl, flowers sent by supporters of the top prosecutor stand outside the Supreme Prosecutors' Office. [YONHAP]


During the disciplinary committee’s first session last week, Yoon’s lawyers submitted motions to disqualify four out of five participants in the process for alleged bias against the prosecutor general. The committee, however, struck down the motions. One of the four members, Shim Jae-cheol of the Justice Ministry, recused himself after voting down the motions.

Yoon’s lawyers said Monday that they have submitted a written statement to the Justice Ministry that the committee was unlawfully formed. “After the disciplinary process began, an outside expert on the panel resigned. Without selecting a replacement from the reserve members, [Choo] named a completely new member, Chung Han-joong, in violation of the law governing the process,” said Lee Wan-kyu, one of Yoon’s lawyers.

Chung, a law professor from Hankuk University of Foreign Studies, is currently serving on the committee as the acting chairman. During the first session of the hearing on Thursday, Chung reportedly demanded that Yoon publicly say whether he will run in the presidential election in 2022.

Lee also said the ministry must fill the vacancies created by recusals of Justice Minister Choo and Shim from reserve members. Choo was supposed to be on the committee, but she is not participating in the process since she is the petitioner. Lee said his client wants all seven seats in the disciplinary committee to be filled before deliberating his case.

Yoon, who did not attend the hearing last week, is not expected to attend Tuesday’s session either.

“When we agreed to hold the second session on Tuesday, we agreed with Yoon’s lawyers to conclude the case on Tuesday,” Chung said.

Yoon’s lawyers, however, said they never agreed to such a schedule.