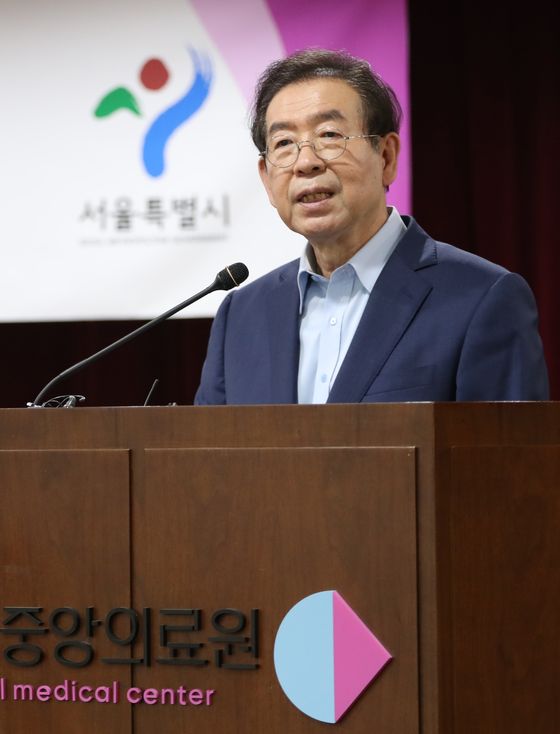 
According to the Seoul Metropolitan Police, Park’s body was discovered around Sukjeong Gate, the northern gate of the old city walls, within the vicinity of Mount Bukak.

Park, 65, was found in a state that appeared to suggest he took his own life, according to police sources.

The mayor’s daughter reported his disappearance to police at around 5:17 p.m. on Thursday. Before leaving his home, Park had made comments to his family that sounded like his last words.

Police and the Seoul city government said they had verified Park had left his official mayoral residence in Gahoe-dong of Jongno District, central Seoul, at around 10:44 a.m. that day, donning a black hat, dark jacket, black pants and gray shoes. He was also carrying a black backpack, city officials said.

The last signals to come from Park’s phone, which remains turned off, were detected near a Buddhist temple in Seongbuk-dong, northern Seoul.

Police and fire authorities mounted a massive search consisting of around 770 personnel, six drones and nine dogs for around seven hours before finally discovering his body shortly after midnight Thursday.

Park is believed to have been the subject of a criminal complaint filed by a former secretary on Wednesday, according to investigative reports by local media. She claimed Park touched her body numerous times, and sent her inappropriate messages through a messenger app, though police have not confirmed these criminal complaints had been filed.

Police were due to conduct a preliminary investigation to discover Park’s exact cause of death.