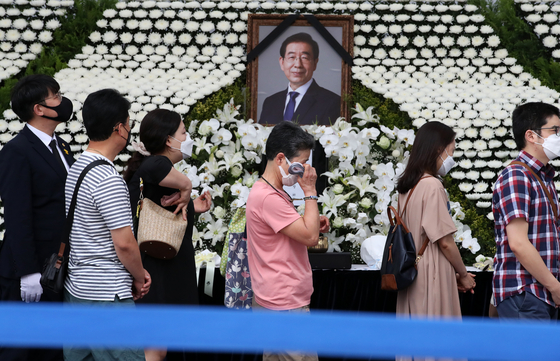 Visitors line up to pay their respects to late Seoul Mayor Park Won-soon at a mourning altar outside Seoul City Hall in Jung District, central Seoul, on Sunday. The altar is open from 8 a.m. to 10 p.m. through Monday. [NEWS1]

Public figures from all walks of life paid their respect to deceased Seoul Mayor Park Won-soon over the weekend at the funeral hall where his body was laid. Park was found dead last Friday in an apparent suicide after a police complaint alleging sexual harassment was filed against him.

Numerous figures from the political, diplomatic, business, social, religious and cultural sectors visited Seoul National University Hospital in Jongno District, central Seoul, from Friday through Sunday to bid their last farewells to Park, who was found dead on a mountain in Seoul by police at 12:01 a.m. Friday after his daughter reported him missing on Thursday afternoon. He was 64.

President Moon Jae-in gave no official statement about Park’s death over the weekend, but sent flowers to the funeral hall Friday, the same day that several Blue House secretaries went to pay their respects.

Among them was Presidential Chief of Staff Noh Young-min, who later told reporters that Moon said he was in “utter shock” by the death of Park, who he had “built a really long relationship with ever since [they] studied together at the Judicial Research and Training Institute,” after passing the exams to become a lawyer.

Sim Sang-jung, chairperson of the minor left-wing Justice Party, said she wished the best for Park, but quickly added that “the person in the most pain right now would be the plaintiff,” referring to Park’s former secretary who accused him of sexually harassing her. The investigation into those allegations was closed after Park died.

“I want [you] to know that it’s not your fault,” said Sim, as she pleaded with the public not to inflict any further pain on the alleged victim by spreading details about her identity online.

A temporary mourning altar has been set up outside Seoul City Hall Saturday for mourners to visit throughout Monday, from 8 a.m. to 10 p.m.

A massive search party mounted by police and firefighters found Park’s body in a wooded area on Mount Bukak, near his home, nearly seven hours after his daughter had reported him missing to the police.

Park's daughter told police that he had made comments to his family that hinted at suicide around four to five hours ahead of leaving his home before 11 a.m. Thursday.

The Seoul Metropolitan Government said it only thought Park was ill when he told aides that morning he wanted to cancel all his scheduled activities because he was feeling unwell.

Police said they found no evidence of foul play and that it appeared Park, who was the longest-serving Seoul mayor ever, committed suicide.

Translated from Korean, the suicide note, which was disclosed Friday morning with permission from his surviving family, read: “I apologize to everyone. I thank all those who have been with me throughout my life. To my family, to whom I’ve only given pain, I am always sorry. Please cremate me and spread [the ashes] at my parents’ graves. Goodbye everybody.”

The note was found on his desk at home.

Park’s death came just a day after his former secretary filed a criminal complaint with the police alleging she had been sexually harassed by Park on numerous occasions for over four years.

Officers said the secretary filed the complaint with the Seoul Metropolitan Police Agency on Wednesday night, and stayed until early Thursday morning alongside her lawyer to share her testimony.

While the police refused to go into the details, officers said the alleged victim submitted conversation logs between her and the late mayor on the encrypted messaging app Telegram, which included several “personal photos” of her former boss.

Graphic descriptions of the late mayor’s unsolicited sexual advances toward the secretary spread like wildfire on social media platforms Friday, but police did not verify whether they were true.

Officers Sunday said that the nascent case against Park has been closed due to his death, as there is nobody to indict.

As rumors about the late mayor’s alleged sexual misconduct continued to spread online, Moon Mi-ran, who formerly served as deputy mayor under Park, urged reporters in a text message last Friday not to spread any “groundless statements” about him or anything “based on a one-sided claim,” saying anyone who tarnishes the former mayor’s honor through such acts will face “stern legal actions.”

The Seoul Metropolitan Government said in a separate text message to reporters later Friday that a public servant at the office who is unrelated to the case and never worked as Park’s secretary was being falsely accused online of being the alleged victim, and undergoing “immense mental stress” upon seeing her photos and personal details spread online.

The office warned “strong legal measures” against anyone who disseminates her personal information and said it has filed a complaint with the Seoul cyber police.

Park’s coffin is scheduled to be carried out of the hospital on Monday at 7:30 a.m., after which it will arrive at Seoul City Hall for a funeral service. Park’s body will then be transferred to Seoul Memorial Park in southern Seoul to be cremated, before being buried in his hometown in Changnyeong County, South Gyeongsang.