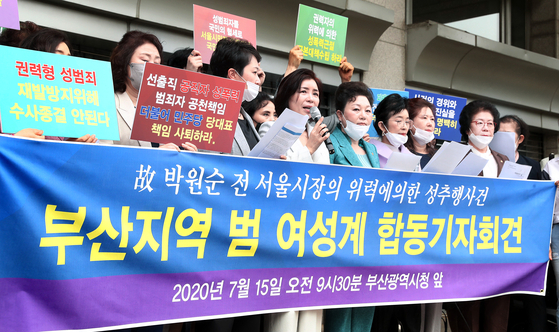 The Seoul Metropolitan Government said Wednesday it would form an investigative team with outside experts to “thoroughly reveal the truth” about the sexual harassment allegations that led to the suicide of Seoul Mayor Park Won-soon.

But in the city government’s first official press conference about the allegations, held six days after Park's suicide, officials adamantly refused to answer any questions about the accusations or explain precisely how and when the investigation will take place, saying they feared their comments could cause “secondary harm” to individuals.

The city’s spokesman Hwang In-sik said in the briefing that the investigative team will include women’s rights, human rights and law experts from outside the city government, adding that Seoul City Hall “sympathizes with the pain and suffering” of the alleged victim.

But some legal experts doubted the internal probe will have any tangible effect on the victim and her claims that the Seoul government ignored her requests for help, given that the team will have no investigative prerogatives akin to those of the police or prosecution, such as conducting raids.

Police said last Friday — hours after Park was found dead at 12:01 a.m. by a police dog on Mount Bukak in Seoul, near his residence — that it would close the nascent sexual harassment case due to the mayor’s death, as the alleged perpetrator had died.

Park was found dead a day after his former secretary filed a sexual harassment complaint with the Seoul Metropolitan Police Agency on July 8. It remains a major mystery how the mayor learned of the complaint, with the possibility that someone leaked the information to him.

The secretary’s representatives, mostly women’s rights activists, have been urging the Seoul Metropolitan Government and police to dig into the case and shed light on the victim’s ordeal, saying, “The true nature of the case does not disappear just because the suspect does not exist anymore.”

The main opposition United Future Party (UFP) as well as several activists’ groups and right-wing figures have also called for the police and prosecution to investigate the sexual harassment allegations and suspicions that Seoul government officials turned a blind eye.

The Seoul Metropolitan Government replied to those mounting calls with Wednesday’s announcement of its internal probe, but the police and prosecution have so far made no remarks indicating they would look into the victim’s complaint.

The police are still investigating the motive behind the late mayor’s suicide, which was not addressed in the suicide note left at his home. Park’s former chief secretary, Koh Han-seok, was summoned to the Seongbuk Police Precinct in central Seoul Wednesday for three and a half hours of questioning from 9 a.m.

Koh may have been the last person to speak with Park. As he left the precinct, the former chief secretary told reporters he last spoke with Park at 1:39 p.m. on July 9, about 10 hours before he was found dead on the mountain, but refused to reveal details.

In a text message to the Seoul City Hall’s press corps, the city government denied media reports indicating Koh knew about the victim’s allegations, saying he neither knew nor received any report about it.

Koh is among 27 “special administrative service” officials in the Seoul city government, mostly secretaries and advisors to Park, who were automatically dismissed last Friday following Park’s death, as per a domestic law that states their work contracts expire when their local government chief leaves office.

Seoul police are also probing allegations raised by the mayor’s former secretary that her personal information was being circulated online, and becoming fodder for malicious comments from Park’s supporters. She was summoned for questioning by police Tuesday.