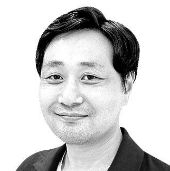 Jeong Sang-hoon
The author is a Greenpeace Climate and Energy Campaigner.


The government has been making a big deal out of the-so-called Green New Deal initiative. It touts the five-year initiative will give growth momentum to the economy struggling from a virus pandemic while tackling climate challenges and generating jobs in the sustainable environment field. But the latest steps from the government raise suspicion about its philosophy behind the New Deal project.

President Moon Jae-in held a video conference summit with the new leadership of the European Union on June 30. Moon asked the EU to become a major partner to its Green New Deal. Europe has been spearheading a Green Deal with the goal of making the continent climate neutral by 2050. The two summits vowed “complete and speedy” execution of their greenhouse gas emission curb commitments to the Paris Agreement on Climate Action.

But he has contradicted his Green New Deal vision and global climate commitment as his government has given go-ahead to state utility Korea Electric Power Corporation’s decision to invest in Indonesia’s Jawa 9 and 10 coal power projects. According to the International Energy Agency, coal fuel is the largest culprit behind global warming. It is singled out as the first to be phased out to address climate change challenges. Yet the Seoul government has endorsed a major coal investment project. 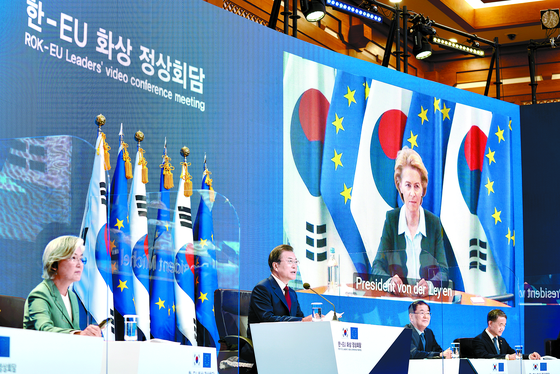 In a teleconference with leaders of the European Union in the Blue House on June 30, President Moon Jae-in asked the EU to become a major partner in the Green New Deal policies pursued by the Korean government. [JOINT PRESS CORPS]

The Green Deal was born under the long-term vision to fight climate changes, fuel growth and address inequalities. The EU aspires to entirely remove carbon emissions and generate a minimum 1 trillion euros ($1.1 trillion) through various projects from energy, transportation to other industries.

Korea’s Green New Deal is much more humble. Under the draft outline announced in June, the government will devote 27 trillion won ($23 billion) over the next five years. Former Vice President and presidential contender Joe Biden vowed $1.7 trillion in spending to clean energy and reduce U.S. greenhouse gas emissions over the next decade. Seoul’s plan can hardly be considered a “Green Deal” when compared to their spending plans.

The government makes no mention of its goal on turning carbon neutral. It has also endorsed spending on coal. The initiative appears to be more rhetoric than an action plan with a clear vision or goal.

Korean youths are reading a lawsuit against the government to urge faster action against climate change as their lives will be in danger in the future. In June, 226 cities and districts announced a “Climate Change Emergency Declaration.” Yet the central government indulges with a slogan-like plan.

Former President Lee Myung-bak pursued “Green Growth,” but under his helm greenhouse gas emissions grew more than 10 percent from 2009-2010. The Green New Deal action plan to be unveiled on July 13 will show whether the Moon Jae-in administration is genuinely serious about the vision. The government must study the European Green goals. Otherwise, its plan will be all-talk like the past government of Lee.

Resources as a political football