Samsung looks to universities for help with chips, displays

Samsung looks to universities for help with chips, displays 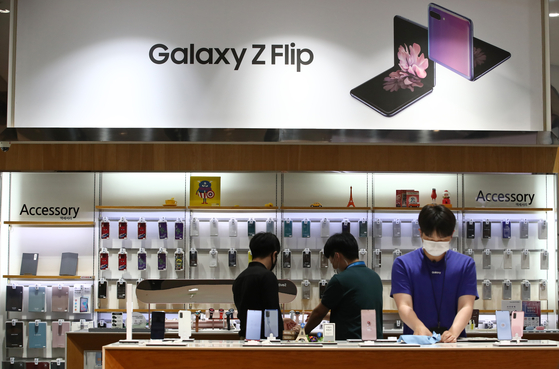 A Samsung Electronics store in Gangnam District, southern Seoul, on July 7. The company announced plans to commit at least 100 billion won ($83 million) in funding to university research related to semiconductors and displays. Basic sciences will be included this year. Samsung earlier reported an earnings surprise in the second quarter. [YONHAP]


Samsung Electronics will be committing at least 100 billion won ($83 million) this year to joint semiconductor and display research with universities. This is twice as much as last year.

Over the past two years, the company has funded an average 40 billion won of joint research with schools.

According to Samsung Electronics on Monday, this is the third year in which the joint research program has been run. It has supported roughly 350 university professors and 400 students, including those in doctoral programs, every year.

The company said the expansion of its joint cooperation program this year is particularly important as the world currently faces the Covid-19 crises.

There has been growing concern at schools about the cutting of research budgets due to the outbreak.

The program provides free use of infrastructure, including high-tech semiconductor facilities. Samsung said it is offering free use of its facilities so that these researchers can achieve results that can be used practically in industries.

Last year Samsung Electronics helped develop 100 or so prototype semiconductors for research purposes that were commissioned by roughly 10 universities.

The company said it is not only offering the joint cooperation programs to engineering departments but also to basic science departments. Their research could be utilized in the development of new materials and public data.

It hopes that the program will help build a strong ecosystem.

The current administration has emphasized the importance of Korea’s independence in terms of materials, parts and equipment since Japan has tightened its export controls a year ago.

The recent disruption of the global supply chain due to the spread of the coronavirus has also raised concerns over the heavy reliance of materials and parts abroad.

Some Korean manufacturers have been forced to suspend operations of factories due to the delayed supply of parts from overseas.