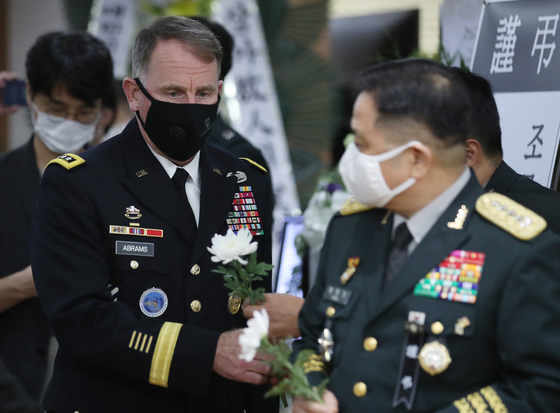 
The U.S. National Security Council (NSC) and former commanders of the U.S. Forces Korea (USFK) expressed their condolences at the wake of Paik Sun-yup, South Korea’s first four-star general and a veteran of the 1950-53 Korean War.

“South Korea is a prosperous, democratic Republic today thanks to Paik Sun-yup and other heroes who put everything on the line to defeat Communist invaders in the 1950s,” read an NSC Twitter post on Monday. “We mourn General Paik’s death at age 99 and salute his legacy.”

Paik died Friday night at a hospital in southern Seoul, according to the South Korean Army.

Several former commanders of USFK offered profuse praises commemorating the late general to the news outlet Voice of America (VOA), crediting him for heroism exhibited during the Korean War.

Gen. Burwell Bell, who led USFK from 2006 to 2008, even called him the “military father” of South Korea, “not unlike America’s George Washington.”

“He was tactically and operationally very smart, and he was a fearless warrior,” Bell said. "Most importantly, he led and rallied his forces through inspirational battlefield leadership and heroic close combat.”

James Sherman, USFK commander from 2011 to 2013, said Paik was a “true hero and patriot” who helped keep South Korea’s alliance with the United States “strong and unbreakable for the last 70 years.”

Paik’s most famous contribution to the war is his role in the defense of the Busan perimeter in September 1950, when he led South Korean troops to victory at the Battle of Dabu-dong. He later went on to serve as the South Korean Army's chief of staff and its first four-star general, as well as in several ambassadorial posts and as transportation minister following the war.

U.S. Ambassador to South Korea Harry Harris and current USFK commander Robert B. Abrams were among the public figures to pay their respect to Paik at his wake at the Seoul Asan Medical Center over the weekend.

But as clear as his military merits are, Paik also leaves behind a controversial legacy due to his service in the Japanese-controlled Manchukuo Imperial Army during Japan’s colonial rule over Korea from 1910 to 1945.

Paik was part of the Gando Special Force, an independent battalion formed largely to hunt down Korean independence fighters in the border areas between Korea and Manchuria, though the late general said he never directly engaged in battle with Koreans.

Paik’s checkered past generated intense ideological debate in South Korea over how to approach his legacy, leading to arguments over whether he should be buried at a national cemetery.

Critics argued Paik does not deserve such a burial, while veterans' groups argued Paik should be buried with greater honors at the Seoul National Cemetery, given his achievements during the Korean War.

After consulting with his family, the Ministry of National Defense announced Monday it will inter Paik at the Daejeon National Cemetery on Wednesday.

Seoul National Cemetery, which houses the tombs of many other Korean War veterans, was already too full to house Paik’s tomb, according to a Defense Ministry spokesperson.

In spite of the continuing dispute over the burial, Paik’s family on Monday expressed satisfaction with the government’s decision to inter him in Daejeon, stating that the late general would have wanted them to follow the state’s decision.