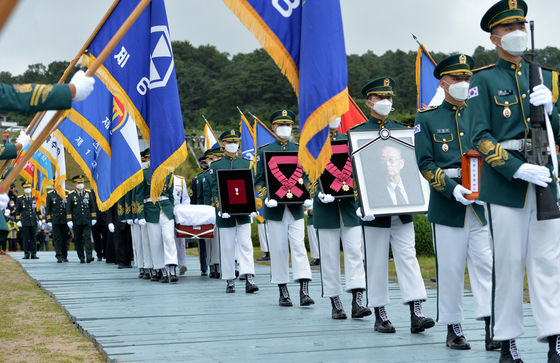 A burial ceremony is held for Paik Sun-yup, a Korean War hero and four-star general who died last Friday, at the Daejeon National Cemetery Wednesday. The funeral procession started from Asan Medical Center in Seoul earlier that morning. [YONHAP]


Paik Sun-yup, the country’s first four-star general recognized as a 1950-53 Korean War hero, was buried at the Daejeon National Cemetery Wednesday amid controversy over his lingering label as a collaborator with Japanese colonizers.

The funeral service began at 7:30 a.m. at the Asan Medical Center in Songpa District, southern Seoul, five days after Paik died on July 10 at the age of 99.

Access to the funeral service at the hospital was limited to 90 people because of Covid-19 precautions and was attended by current and former military brass, politicians and family members. The funeral was presided over by Army Chief of Staff Gen. Suh Wook and was attended by military officials including Defense Minister Jeong Kyeong-doo, Joint Chiefs of Staff Chairman Park Han-ki and Gen. Robert Abrams, commander of the U.S. Forces Korea.

Politicians in attendance were mostly from the opposition party and included Kim Chong-in, the interim leader of the United Future Party (UFP). Kim You-geun, the first deputy chief of the presidential National Security Office and a former commander of the 8th Army Corps, represented the Blue House.

Abrams recognized Paik as “one of the founding fathers of our ironclad alliance" between Seoul and Washington and said, “Farewell friend, and rest in peace.”

Paik, best remembered for his valor in deterring the North’s troops in the Battle of Tabu-dong in 1950 during the Korean War, has been a controversial figure for his checkered past, having served under the Japanese imperial army before Korea’s liberation.

Paik’s supporters called for him to be buried at the Seoul National Cemetery, despite the Ministry of National Defense explaining that the plot there is already full.

However, detractors have strongly protested Paik being buried at a national cemetery alongside patriots and independence fighters, viewing him as a pro-Japan collaborator and a traitor.

The Defense Ministry said it consulted with Paik’s family and decided to bury Paik at the Daejeon National Cemetery.

Paik was born in 1920 in Kangso County in North Korea’s South Pyongan Province, during Japanese colonial rule which lasted from 1910 to 1945.

In the 1940s, Paik served in an independent unit of the Manchukuo Imperial Army, the Gando Special Force, which is known for suppressing Korean guerillas fighting for independence. Manchukuo was a puppet state established by Japan in Manchuria.

In 1953, Paik, recognized for his feats during the Korean War, became the South Korean Army's first-ever four-star general at the age of 33. After his retirement from the military in 1960, he spent the next decade as an ambassador to countries such as France and Canada in the 1960s, followed by a stint as transportation minister from 1969 to 1971.

In 2009, Paik was included by a presidential committee on a list of pro-Japanese figures that collaborated with Japan during its colonial rule over the Korean Peninsula. Paik had denied that he had fought against Koreans during his time in the special unit. 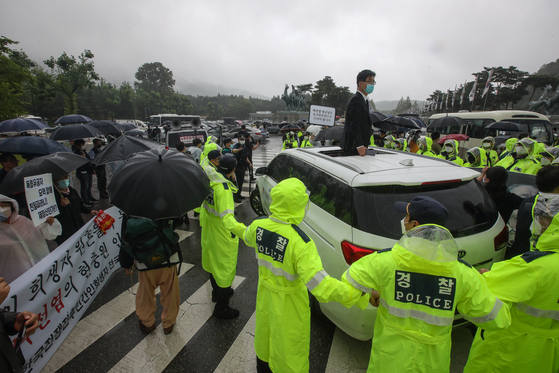 Police officers draw a line between detractors of Paik Sun-yup, left, and supporters of the late four-star general Wednesday in Yuseong District, Daejeon. Some civic groups protested Paik’s burial at the Daejeon National Cemetery, decrying him as a pro-Japan collaborator, while others showed up in support of Paik as a Korean War hero. [YONHAP]

Paik’s contributions toward modernizing the South Korean military and forging a bilateral alliance between Seoul and Washington were also recognized by the United States.

The U.S. State Department extended its “sincerest condolences” in a statement released Tuesday on the eve of the funeral, which went on to recognize Paik’s contributions toward the Seoul-Washington alliance.

“As Korea’s first four-star general, his service to his country in the Korean War was emblematic of the fight for the values of freedom and democracy, values that both the United States and the Republic of Korea continue to uphold today,” the statement read.

U.S. Ambassador to Seoul Harry Harris was among U.S. officials, including Abrams, who paid respect at Paik’s burial ceremony in Daejeon. There was no key Blue House or ruling Democratic Party figure at the burial ceremony, attended by hundreds of people in drizzling rain.

Soldiers carried Paik’s portrait, medals and a casket covered in a Korean flag to the burial site.

“Until the moment he shut his eyes, Gen. Paik contributed to the development of the country and the people," Suh, the Army Chief of Staff, said. "I hope you can lay down your heavy burden and leave it to the younger generation and close your eyes peacefully.”

Paik, clad in a uniform similar to the one he wore in the Korean War, was buried at the National Cemetery in Daejeon at 11:30 a.m. Wednesday.