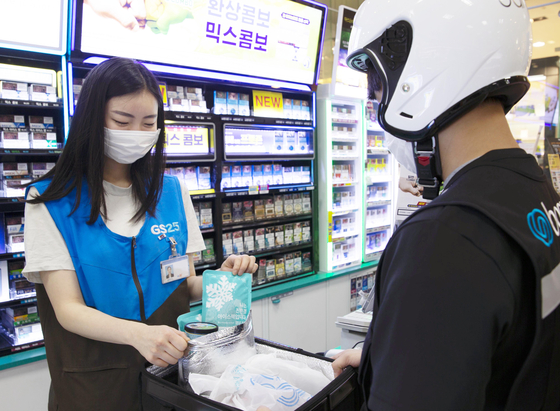 GS25 plans to start a delivery service for its ice cream products and bingsu, or shaved ice, starting Wednesday. People who make orders through delivery app Yogiyo or Kakao Talk will be able to receive the products in less than an hour. [YONHAP]


Ice cream sales are on the rise as more Koreans look for sweet snacks they can eat at home as the Covid-19 pandemic continues.

According to market research firm Euromonitor International Korea, sales of ice cream in Korea are projected to total about 1.63 trillion won ($1.33 billion) this year, up 0.1 percent from 2019. 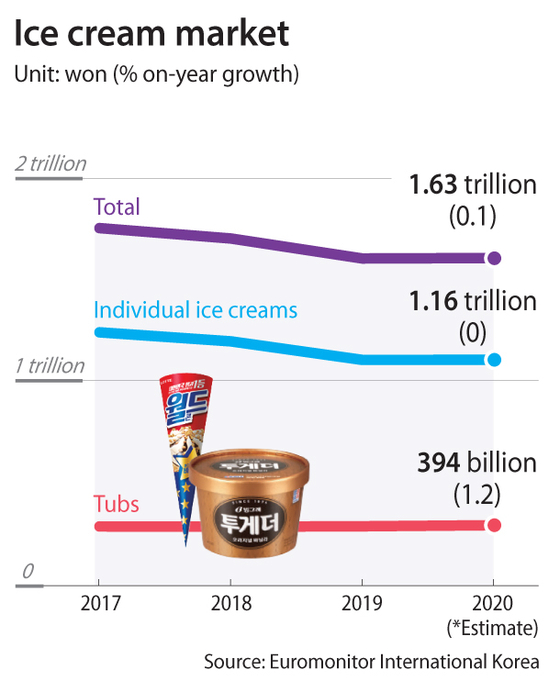 Tubs of ice cream were especially popular this year, suggesting that more people are buying ice cream to eat at home rather than on the go.

The market value of ice cream tubs will likely increase to 394 billion won this year, a 1.2 percent increase compared to last year.

Ice cream sales at Korea’s four largest convenience stores — GS25, CU, 7-Eleven, and Emart24 — have seen a sharp increase of up to 24.2 percent in the second quarter of the year. During the same period, sales of premium ice cream products increased by up to 65.1 percent.

Ice cream sales are expected to continue to grow throughout the year as online orders increase.

As ice cream melts quickly, it's mainly sold at offline stores. Online sales are projected to increase this year and are estimated to total about 4.5 percent of total sales as “untact”— a portmanteau of the prefix “un” and contact, meaning “no contact” — becomes the established norm due to the coronavirus pandemic. Online sales of tubs of ice cream are expected to make up about 5.8 percent of total tub sales, according to Euromonitor International Korea.

As part of the effort to revive the ice cream industry, food and beverage company Binggrae acquired Haitai Icecream, a subsidiary of Haitai Confectionery and Foods, for about 140 billion won earlier this year.

Binggrae, which was the second largest among Korea’s top four ice cream makers —  Lotte Confectionery, Binggrae, Lotte Foods and Haitai Icecream — plans to expand its overseas business after the acquisition of Haitai Icecream.

“The falling ice cream market in Korea is expected to grow sharply this year as Koreans who enjoy traveling to foreign countries during the summer season are likely to stay [here],” said Moon Kyung-sun, head researcher at Euromonitor International Korea. “In order to continue the growing trend, ice cream companies will try to boost sales by releasing new and unique products.”

Ice cream is not the only beneficiary of the Covid-19 outbreak.

Sales of cookies are expected to increase 3.4 percent, while candy sales are estimated to grow 1 percent this year, according to Euromonitor International Korea. Crackers are likely to see a 0.9 percent increase in sales, followed by chocolate with a 0.2 percent increase.

In Korea, where wearing masks has been common since the start of the coronavirus outbreak, sales of breath mints that help reduce bad breath, a major problem in the confines of a mask, have been increasing.