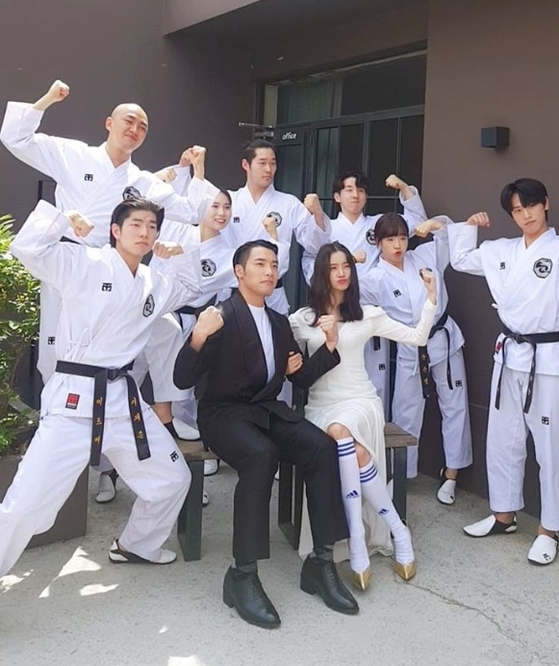 
Only a handful of K-pop girl group members reveal their other halves, let alone publicly tie the knot, with Korean entertainment agencies notoriously strict about their stars dating, as critics say they fear such information may “disappoint the male fans.”

Woo Hye-rim, 27, former member of girl group Wonder Girls, had kept her then boyfriend of seven years tucked away until early this year — three months before she walked down the aisle with him on July 5.

“It feels so good to finally hold Hye-rim’s hand freely in public,” said Woo’s now-husband Shin Min-cheol, as soon as their relationship went public in April on MBC’s reality program “Don’t Be Jealous,” where the two were featured as one of the celebrity couples.

While his wife may be more familiar with fame, Shin is no stranger to the spotlight either.

The 33-year-old is an extreme taekwondo athlete and the founder of Korea’s first extreme taekwondo performance group and training center Mirme Korea. As a sponsored athlete of the energy drink company Red Bull, Shin has been traveling across the globe, participating in international competitions and performance events. 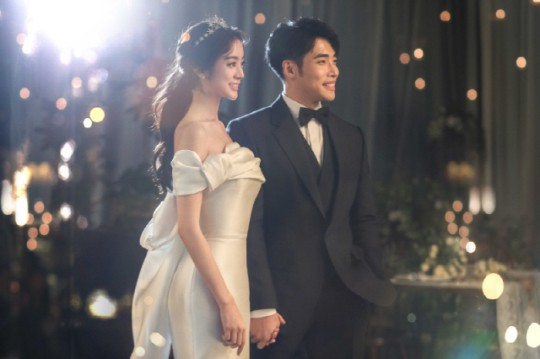 
“I’ve waited so long for this day when Hye-rim and I can finally form a team and support each other to show new sides of us to our fans,” he said. “In that sense, I think this year is very important for us.”

This year is indeed very special for Woo. Not only did she surprise her fans by revealing her boyfriend and getting married three months later, but she also signed a contract with a new agency, rrr Entertainment, after leaving JYP Entertainment where she began her career as a K-pop star. 2020 also marks the 10th anniversary since her debut.

“I feel like this year signals the new beginning of Woo Hye-rim,” said Woo. “I’m very excited for what’s to come next.”

Right after their quiet honeymoon in a hotel in Seoul, the couple visited the Korea JoongAng Daily office in central Seoul on July 9 for an interview to discuss the start of their new life chapter.


Congratulations on your wedding. How does it feel to finally be married after seven years of dating?

Woo: I can’t believe the wedding is finally over. I had heard many times that you won’t really remember a lot of what happened on the day of your wedding ceremony and that it’s really hectic. I finally get what that means. Because of the coronavirus, we had to cancel our honeymoon in Bali and stay at a hotel in Seoul for just three days, but I think it was a good rest. This interview is actually our first official scheduled event as a married couple, and now I think I’m starting to feel like it’s real that I’m a married woman.

Shin: When we broke the news to the public that we are getting married, I said in one of the interviews that I feel like I’m floating on a cloud. Now, I feel like I’ve caught that cloud and put it in my pocket. It’s really a dream come true and a genuine beginning for me.


Was it difficult keeping your relationship a secret for so many years?

Woo: While I couldn’t show my affection in public, it wasn’t like we dated in hidden places. We went to restaurants and cafes freely, but I guess we were so comfortable around each other that people thought maybe he was my manager or something? (laughs) It felt so good to finally come clean and be romantic in public and really be myself.

Shin: I really didn’t talk about my girlfriend or my love life even to my friends, so a lot of people were shocked to find out that Hye-rim was my girlfriend. It wasn’t difficult to keep it a secret, but it was a shame that I couldn’t really support her publicly and be there for her while she was busier as a member of Wonder Girls. I also had many ideas for things we could have done together, like perform together, but they had to wait until we were official.


So now do you have plans to perform together?

Shin: Well, one of the things I wanted to do when we went public was shoot a reality program together like MBC’s “Don’t Be Jealous.” That’s because there are many sides of Hye-rim that her fans have not seen yet that only come out when she’s beside me. So I wanted people to see that adorable side of her too.

Because of the coronavirus, nearly all the overseas events for my extreme taekwondo team Mirme have been canceled, but from day one of dating Hye-rim, I’ve always imagined performing together on stage with her. Because she’s also used to performing on stage as a K-pop star, I’m sure she and I can show off different charms on stage when we do something together. I have ideas and I’m sure they’ll be noticed in the near future.

I also want to create YouTube content with Hye-rim to promote taekwondo, the indigenous martial art of Korea. I can train her to obtain a black belt and maybe film that process for the public. I’m very sure Hye-rim will play an important role in promoting taekwondo internationally.


How do you feel about these plans?

Woo: Of course, it’ll be great. I just worry about how long it’ll take for me to obtain the black belt. I mean, my father and my brother are both taekwondo masters, so I’ve learnt a few forms, or pumsae, but I forgot all of them, so I think I should start by aiming for a white belt.

Shin: It won’t take more than a year for me to train Hye-rim to reach the black belt because I’m a very scary teacher.


As I remember, the Korea JoongAng Daily interviewed you three years ago when you became one of the finalists at the Red Bull Kit-It competition. Back then you said the reason for doing extreme taekwondo is to promote traditional taekwondo and show its potential as a career for young taekwondo players who end up opening dojang, or taekwondo studios, for kids to make a living. It’s been three years since then, do you think your efforts have paid off?

Shin: I believe so and I’m still continuing to advance those efforts. Thanks to Hye-rim, more and more people both in and outside the country have recently been showing interest in extreme taekwondo. I can see when I look at the surging number of YouTube hits on my video content featuring taekwondo kicks.

I was also featured on the program “Master of Living” on SBS last year, where I showcased various kicks. I did this challenge of opening different types of bottles with my kicks and that went viral which helped promote extreme taekwondo.

Woo: I think those who become interested in taekwondo because of me are just interested in knowing who my husband is and what he does, naturally ending up figuring out what taekwondo is. I’m really happy that I can play a role in it because I really respect what he does. 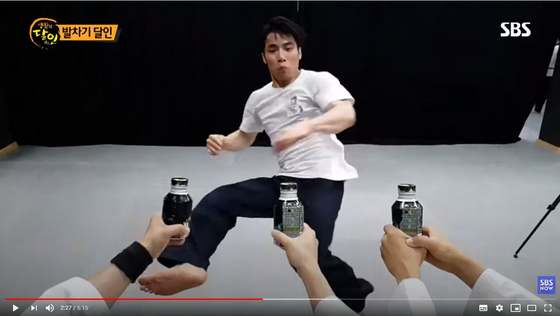 
Shin: I respect what she does. You know she’s juggling the roles of celebrity and university student, and she does it so well. I’m so surprised whenever she comes to the Mirme Center and studies there. I don’t know how she concentrates there with all the noise.


Hye-rim, you entered the Hankuk University of Foreign Studies to major in English for International Conferences and Communication a few years ago. Now, you're a senior. How tough was it to keep your grades up while also working?

Woo: It got harder as I became busier, but I try very hard to have good attendance and maintain good grades. The reason I decided to go to university is that I always felt I needed to develop myself. As a member of Wonder Girls, JYP Entertainment packaged me really well, I believe, promoting me as this member who can speak several languages. I felt like I needed to improve my skills in order to be that person and be confident about it. But there were limitations to studying alone, so I decided to go to school and learn from professors while studying with others who share the same interest.

Shin: When she first told me she wants to go to university, I stopped her. Because to me, juggling the roles of a student and a celebrity and doing both well seemed impossible. But she persuaded me, so I've supported her journey since. I was with her as her guardian when she had her entrance interview at the university, waiting next to impatient parents. Since I know how difficult it was for her to get into that university and how she tried so hard to keep up with her school work, I decided to fully support her in anything she does. I really admire her for that.


You’ve signed a new contract with rrr Entertainment and you’ll be starting a new chapter in life. As a married woman, a former girl group member and a senior at university, what do you see in your future?

Woo: That's a really difficult question. I started off as a girl group member, but I’m now a student and even married. I’m currently writing a book on love, which will also mark my debut as an author. The other day, I wanted to make a business card, but I didn’t know what to write as my job title. Am I a singer? An author? A student? I can’t continue to say I’m a former Wonder Girls member. But there are so many things I want to try and do. I’m sure I’ll find out what I really want to do in the future and which field I want to concentrate on at my new agency.

Shin: I think she doesn’t have to worry about that at this moment. She has so much potential and she can try things out one by one. I’m here to support her.