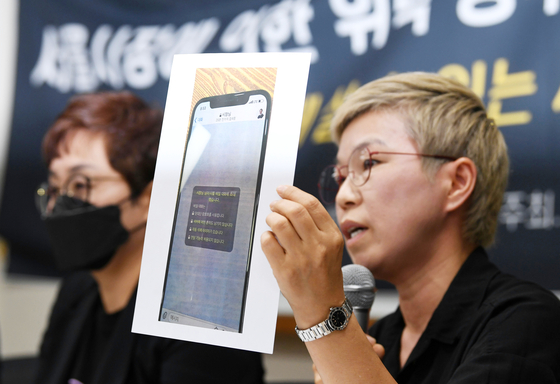 
A civic group on Tuesday asked prosecutors to investigate suspicions that state authorities had breached confidentiality and informed Seoul Mayor Park Won-soon about a probe into his alleged sexual misconduct.

Hwalbindan, a civic group, said it filed a complaint to the Supreme Prosecutors’ Office to investigate “unidentified officials” with the police and the Blue House about suspicions that they had informed Park about the investigation.

The civic group also filed a separate but related complaint with the prosecution to investigate senior officials of the Seoul Metropolitan Government on charges of having aided and abetted Park’s alleged abuse of power that was used to sexually harass his former secretary.

Four days after Park’s suicide, his accuser went public with sexual harassment allegations on Monday, saying she had been molested by the late mayor over the past four years.

In a press conference on Monday, her legal representative and other women's rights activists also raised allegations that Park was notified about the police investigation as soon as it was launched.

“As soon as the victim filed a complaint with the police, the suspect was informed about the situation,” said Lee Mi-kyoung, director of the Korea Sexual Violence Relief Center. “We were able to witness that a person who was holding the office of Seoul mayor was given an opportunity to destroy evidence even before an investigation actually started. How could anyone possibly trust the national system and file a complaint about abuse of power for sexual harassment?”

The former secretary filed the complaint with the Seoul Metropolitan Police Agency at 4:30 p.m. on July 8 and was questioned by police until 2:30 a.m. the next day, according to both the police and the victim’s lawyer, Kim Jae-ryon. Kim said she specifically asked the police to maintain confidentiality because it was crucial to seize Park’s mobile phone as soon as the complaint was filed.

Park committed suicide on July 9, fueling speculation that the police investigation had triggered his death. It was, however, not confirmed how and when Park became aware of the complaint against him.

The police said it never informed Park or the Seoul Metropolitan Government about the case.

The Seoul Metropolitan Government also said it had received no information from the police, and that it does not know when Park became aware about the probe.

The Blue House also said Monday that it did not inform Park about the probe.

The opposition United Future Party (UFP) vowed to lay bare the truth about how the police probe’s confidentiality was breached. 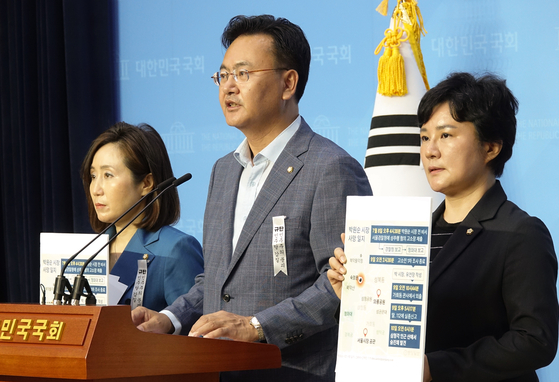 The United Future Party (UFP) lawmakers hold a press conference on Tuesday and urge Justice Minister Choo Mi-ae to order the prosecution to open an investigation into the suspicion that Park had been notified about a probe into his alleged sexual misconduct by state authorities, possibly the police or the Blue House. [YONHAP]


“There are suspicions that information about the investigation was briefed to senior authorities and then directly sent to Park,” said Rep. Joo Ho-young, floor leader of the UFP. “If that is true, it amounts to not only the leak of confidential information obtained in line of duty but also an attempt to order evidence destruction. We will investigate the suspicions.”

He also said city government officials, particularly Park’s close aides, must be investigated for suspicions that they had covered up Park’s alleged sexual misconduct for years.

“Whistleblowers from the city government told our party that the mayor’s secretariat continued to aid and abet Park’s sexual harassment,” Joo said. “The victim’s internal complaints were ignored and her rights were violated.”