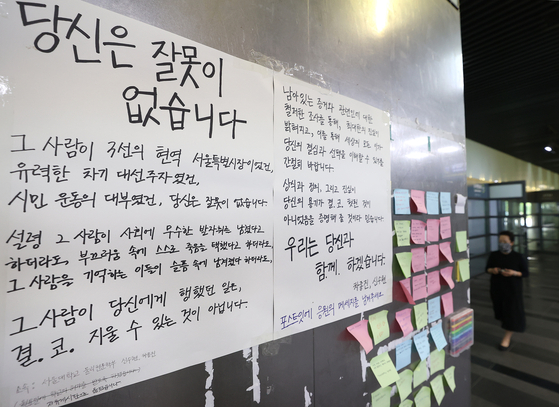 Messages supporting the sexual harassment victim of late Seoul Mayor Park Won-soon are posted on a board in Seoul National University's library on Thursday. [YONHAP]


The police on Friday expanded its investigation into suspicions that Seoul city government officials had aided and abetted late Mayor Park Won-soon’s sexual harassment of a former secretary and ignored her internal complaints for years.

The Seoul Metropolitan Police Agency said Friday it will create a special taskforce to more actively investigate the suspicions. The deputy head of the agency will head the investigation.

Park, the mayor of Seoul since 2011, was found dead on July 10 in an apparent suicide, after he was reported missing on July 9. His former secretary filed a complaint to the police about alleged sexual harassment on July 8, but it is still unclear if Park knew about the complaint or not.

Earlier this week the police asked a local court to issue a warrant to access communication records for Park’s three mobile phones, but the request was rejected.

The court said Friday there were precedents of issuing a warrant to access communication records for an investigation into a suspected crime, but the police failed to show grounds that Park’s death should be investigated as a criminal case, such as a murder.

The police said it will concentrate on unlocking Park’s iPhone, found with his body. 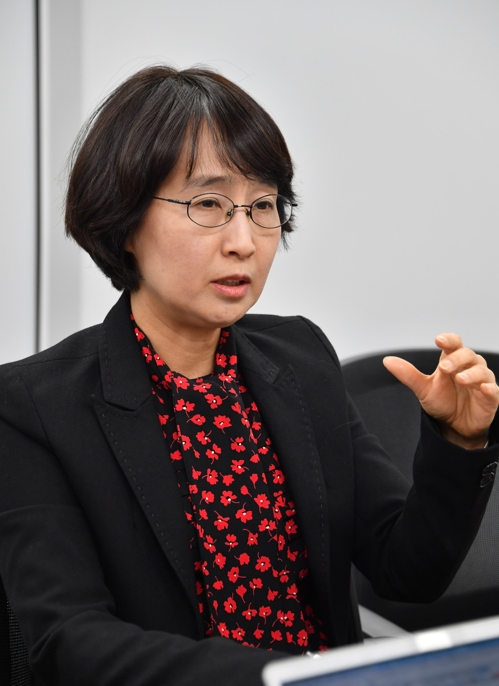 
Lim is believed to be key to resolving the mystery of if — and if so, how — Park became aware of the police probe into the sexual harassment allegations.

Lim told reporters that she did meet with Park on the afternoon of Wednesday, July 8, and asked if he had committed any misconduct after she heard about the allegations from sources outside the city government. They had the conversation around 3 p.m., one hour and 30 minutes before the victim filed the complaint with the police.

She also met with Park around 9:30 p.m. on Thursday in the mayor’s residence, fueling speculation that she had fed Park information about the police probe.

The Seoul Metropolitan Government said Friday that Lim has submitted her resignation, but it did not accept it.

“She must cooperate with the joint investigation by the city and outside experts,” a city official said.

“She may face punishment after the investigation,” the official said. “So, we shouldn’t accept her resignation.”

On Monday, the Korea Sexual Violence Relief Center and the Korea Women’s Hot Line office, organizations supporting the victim of Park’s alleged sexual harassment, held a press conference and demanded an investigation. Two days later, the Seoul city government announced a plan to form an investigation team with outside experts to reveal the truth about the sexual harassment allegations that appear to have led to Park’s suicide.

Lim was named as special advisor on gender equality in July last year. She had worked in various rights groups including the Korea Sexual Violence Relief Center. She was also an aide to Democratic Party Rep. Nam In-soon.

The Korea Sexual Violence Relief Center and the Korea Women’s Hot Line office released a press release on Thursday to reveal that Park’s close aides had pressured the victim to remain quiet. They also revealed some details of Park’s sexual harassment against the victim.

“After she filed the complaint on July 8, former and incumbent senior officials and other city officials had contacted the victim,” the groups said. Most of them pretended to support the victim but discouraged her from publicizing the case, they said.

The groups also said city officials forced the victim for years to “please Park to keep him in a good mood.” She was ordered to perform discriminatory and inappropriate tasks such as handing over undergarments to Park when he took a shower after his workout.