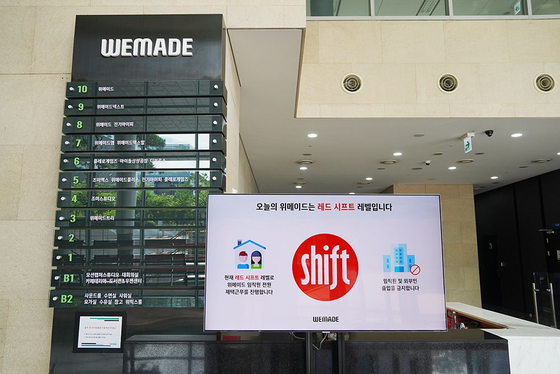 A panel at WeMade's headquarters in Pangyo, Gyeonggi, shows the Shift level. Red means the danger of infection is high and therefore all employees should stay home. [WEMADE]

Commuting to work is increasingly a thing of the past in Pangyo, Gyeonggi — frequently dubbed Korea’s Silicon Valley. The area’s cluster of IT firms and game companies are introducing new policies to incorporate telecommuting as part of their regular working life.

Like companies around the world, Pangyo offices were pushed into telecommuting by the Covid-19 pandemic. Although at first it seemed to be a temporary safety measure, more businesses nowadays are coming around to the idea of a more permanent change.

Game developer WeMade, famous for role-playing game The Legend of Mir, has tested a new work shift system in the past month titled “Stay Home Instead Full Time,” or Shift for short. This system allows employees a choice of where to work based on a traffic light warning system.

The red shift refers to an emergency where employees have to be on high alert for possible infections. Nobody is allowed to work in the office at red. Under amber, employees have to constantly monitor the situation, and only 15 to 20 percent of staff are allowed to come to the office, if their work really requires them to do so. Green means there is zero threat of contracting an infectious disease and staff can choose to work from home or the office.

This new system was tested on one team of 35 people who checked the Shift alert on the company website every morning and decided whether to stay home or commute to work. The goal is to expand it to all 700 employees by November.

“Shift adds more flexibility by shifting work patterns according to the Covid-19 situation,” said Song Mo-heon, a business team leader at WeMade. “We’re planning to change the way our employees work completely so that even after Covid-19 passes, they can work without limits in time or space.”

The company also cleared out some of its assigned desks and instead created an open space where employees can hot-desk if they choose to come into the office.

WeMade is also changing its evaluation methods to be performance-centered, rather than monitoring punctuality and time in the office. As an IT company, coding outside the office building was originally difficult for security reasons, but WeMade introduced a cloud-based network to support telecommuters.

The pandemic is not the only drive behind these efforts to change, WeMade said. For the company, it’s also about establishing a workplace that’s attractive to future employees. “Lives a commutable distance from headquarters” used to be standard in Korean job descriptions. Song believes that this requirement will start pushing away the skilled workforce.

“Anyone that engages in a creative job wants the choice to be in an environment that can maximize their performance,” he said. “This means they should be able to work not only in Pangyo, but Gangneung and Busan. Covid-19 has become an opportunity for us to find ways to pull in the workforce that wasn't accessible to us in the past, distance-wise.”

An NHN affiliate and a cloud service provider, the company’s 120-or-so staffers come to the office eight hours a week — four hours each on Monday and Thursday. Outside of that, employees can adjust their hours — working 10 hours one day and six the next, for example.

“The work shift system was intended to offer a working environment and culture that best caters to our developers’ needs — to let us work with the most talented developers out there,” said an NHN spokesman. “In the year’s first half, all of our staff had to telecommute from home, but among our developers, the work performance improved and projects were completed ahead of schedule.”

When the IT industry's biggest names Naver and Kakao join the movement, telecommuting is likely to become the industry norm.

Naver CEO Han Seong-sook has already hinted that the company is moving in that direction.

“At the moment, staff are telecommuting due to Covid-19, but in the future I expect working patterns will change in a way that’s different from the past. This is not just about making a change in office hours or relations between staff. We need an entirely new structure,” she said at the digital economy forum on July 6.

After the pandemic’s outbreak, Naver employees took turns within each team coming in to the office twice a week. The practice was extended to July 24.

From July 7, Kakao returned to normal working mode after allowing telecommuting when the coronavirus was at its peak. But the company ran a survey on staff opinions and requested feedback on their experience working from home. With these comments, the IT company said it will conduct pilot tests of different shift systems that consider the roles of different teams within the organization.

“Telecommuting and giving working environment options will become a global trend in the post-Covid-19 era," said Moon Hyung-nam, business professor at Sookmyung Women’s University. "It’s not only a way to pursue work efficiency in a society that wants to minimize face-to-face contact, it’s also a way to attract a skilled workforce.

“We’re about to see a fundamental change to the tradition where companies valued working hours inside the office.”