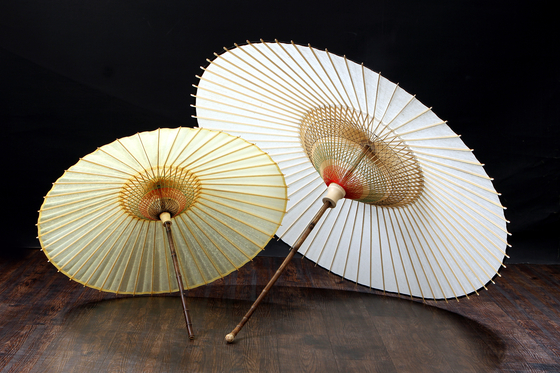 When Kim Yeo-ryeon from Yeosu, South Jeolla, bought a 6,000 won ($5) umbrella on July 9, she was expecting it to save her from a serious downpour.

Instead, she ended up using it to protect herself from the rays of the sun.

This use may have been what umbrellas were originally intended for especially when taking into consideration the many artifacts from ancient Egypt, Mesopotamia and China, which show that people used parasols to cover themselves from the sun.

The word itself is also a major clue, as umbrella comes from the Latin word ombra, which means shade. 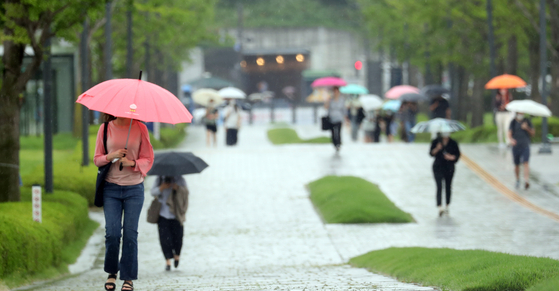 People using umbrellas to protect themselves from the rain. [NEWS1]


Until the 17th century, there was no distinction between umbrellas which were used to protect against the rain or block the sun.

But one widespread idea was that the umbrellas, no matter what the purpose was, were to be used by women.

Men used to get directly into a carriage or wear a hat.

When Jonas Hanway from Britain decided to carry an umbrella in the 18th century, he was immediately questioned about his masculinity.

Carriage business owners felt so threatened about him starting a new trend, they even tried to scare him into stopping by having him nearly run over.

This was not the first time the accessory has caused an uproar.

“The umbrellas we use [in Korea] came into the country by missionaries [in the late 1800s and early 1900s],” said Jeong Yeon-hak, a researcher of the National Folk Museum of Korea.

“Yet, at the same, the umbrella was considered taboo because it covered the sky.” 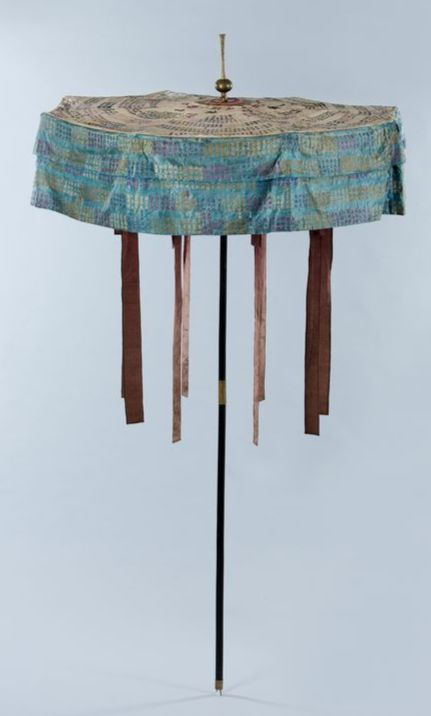 
Back then, the king was often compared to the sky. So covering yourself from looking at the sky was an act that could easily be seen as being disrespectful to the king.

It wasn't until the king started to use an umbrella to cover himself from the sun's glaring rays that higher level aristocrats slowly started to follow suit.

Soon an umbrella became a symbol of power and wealth and whether or not an aristocrat used one was seen as an indicator of their accomplishments.

The effort to make high quality umbrellas was globally seen.

In 1740, France’s Louis XIV bestowed the right to make umbrellas exclusively to Jean Marius, the developer of the foldable umbrella.

Centuries later in 2013, Michel Heurtault, another umbrella master from France, was awarded the Metiers d’Art, the highest honor a craftsman can get from the French government.

Heurtault collected about 3,000 vintage umbrellas that were made between the 18th to 20th centuries, and now makes his own luxury umbrellas based on his studies.

He even put together an exhibition, “Summer Bloom,” in Korea last year displaying a variety of umbrellas. 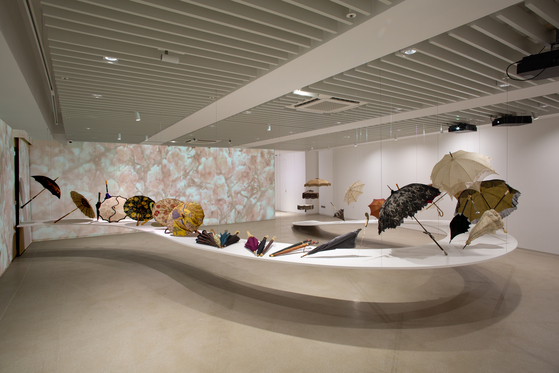 
In Italy, umbrellas are seen as a chance to express one's personal style.

Pasotti, a luxury umbrella maker established in 1956, uses materials such as enameled brass, Swarovski crystals and precious silk fabrics and prices of its umbrellas can reach up to 700,000 won.

However, that price tag pales in comparison to the umbrella unveiled by the London-based Billionaire Couture in 2008. The cost of the crocodile skin brolly? Seventy million won.


Billionaire Couture is not the only British luxury umbrella maker.

The British royal family, including Queen Elizabeth II, often uses umbrellas from Fulton, which has long been revered for its practical and high quality products.

The umbrella from Korean drama “Guardian: The Lonely and Great God” used by actor Gong Yoo was also made by Fulton. 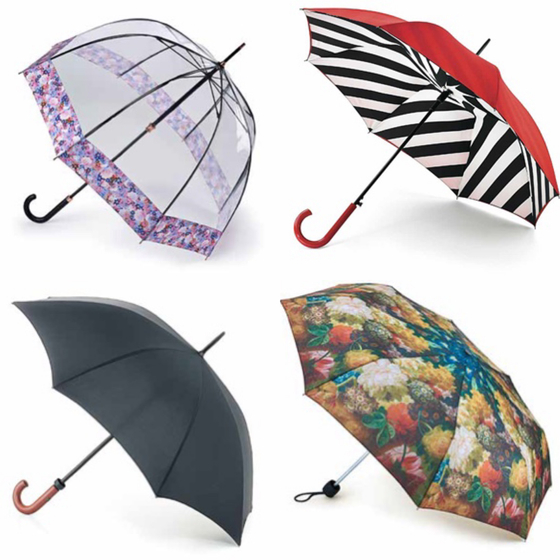 A variety of umbrellas by Fulton. [FULTON]


“An umbrella isn’t something you throw away after a couple of uses,” said Gwak Gi-yeon of Fulton Korea. “It is an item that’s supposed to be used for a long time.”

In Japan, a company called White Rose started to make umbrellas with plastic vinyl in 1958.

During the Tokyo Olympic games in 1964, one American buyer was so impressed with the vinyl version that he decided to introduce it to the other side of the world.

In Korea, it was the company called Hyuprip who made it possible for umbrellas to become everyday items since 1956.

Before then, paper umbrellas were popular, but soon the majority of umbrellas used by everyday people were made with blue plastic.

They cost 500 won, or the same as a bowl of jjajangmyeon, noodles with black bean sauce. 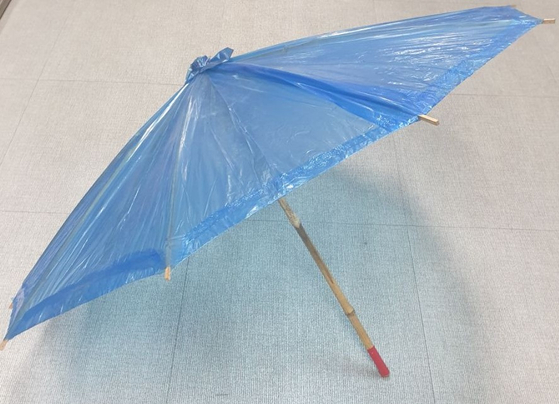 
Later, umbrellas made in China started to flow into the market in Korea.

Many companies, including Hyuprip, couldn’t match the lower prices of the umbrellas made in China.

Hyuprip Korea now has its factory in China.

“Some of the fabrics used for umbrellas sold in Korea are made in Korea, but for the bones, about 99 percent are made in China,” said an official with Hyuprip Korea.

As umbrellas have become more affordable and readily available, few people see them as an item that needs to be taken care of. That’s also partly because of the price of fixing a damaged umbrella.

Bae Gyeong-ae, who lives in Ilsan, Gyeonggi, said she has accumulated about 10 umbrellas which have taken up one corner of the entrance to her home in the past year. Some are missing parts while others are ripped. She thought about having them repaired but changed her mind and decided not to bother when she realized it would be cheaper to buy a new one at a convenience store rather than have them fixed.

It costs about 3,000 won to fix one of the broken stretchers, the parts that look like the spokes on a wheel, while it ranges between 500 won to 1,000 won to replace the tip. But some staff at a repair store say that cost usually rises to about 5,000 as usually the entire handle has to be replaced. So if you have an umbrella that is missing the tip with two broken bones, that means that you will have to pay about 11,000 won to fix it.

Another reason Bae has accumulated so many umbrellas is because they are so bothersome to throw.

Everything needs to be dismantled — the fabric, steal bones, and plastic handles — to be recycled.

Only 37 percent of umbrellas lost on the subway in Seoul this year were returned to their original owners as of June, when they were brought to the attention of subway staff. Unsurprisingly, 95 percent of cell phones are claimed by their owners.


One staff member at a lost-and-found office at Seoul’s City Hall station said people often leave their umbrellas on the subway in April when the spring drizzle comes, in July when it’s the rainy season and in September when typhoons are frequent.

“If you don’t come on the day you lost it, it’s goodbye forever,” the staff member said.

Usually the lost items were kept for seven days at the lost-and-found office in the subway and then sent over to the police. After nine months, they become the property of the country. Some, in good condition, are donated to those in need while the rest are destroyed.

It is estimated that about 40 million umbrellas are thrown away nationwide yearly.

Some regional governments have set up centers that offer services to fix umbrellas for free to encourage people to keep using their damaged umbrellas.

“Even the ones that don’t function as umbrellas still have some parts that still work,” said an official at Gangdong District Office in Seoul. “We take donations of such umbrellas so that we can provide free services to local residents.”

There are some companies like Cueclyp, which makes wallets and small pouches with recycled fabric from umbrellas.

“When an umbrella is so cheap, then people consider the feasibility of whether it is economical to fix,” said Hong Su-yeol, a manager who runs an institute that studies the economic effort of resource circulation.

“It is necessary to make higher quality umbrellas and to set up the infrastructure to fix them properly.” 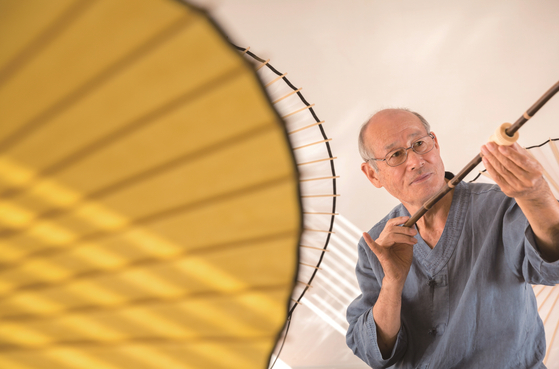 
In Korea, here are some masters who make luxurious umbrellas that couldn't be farther from their cheap, convenience store counterparts.

One of the them is Yun Gyu-sang, designated as a cultural heritage by the office of North Jeolla.

He smears perilla seed oil onto hanji, Korean paper from Jeonju, and uses bamboo to make the stretchers.

The 79-year-old master started making umbrellas in 1957 when he was just 17 years old. He closed down his business in 1985 but started again to serve his passion for umbrella-making. Now his son, 41-year-old Yun Seong-ho, is learning all his secrets so he can follow in his father's footsteps.

Generally, the price of one of Yun's umbrellas ranges from 300,000 won to 400,000 won. He also makes bigger versions that are used for interior design purposes. These ones cost about 2 million won.

“It doesn’t make us much money,” said master Yun. “But I’m proud that I am continuing the heritage, so I’ll continue doing this.”