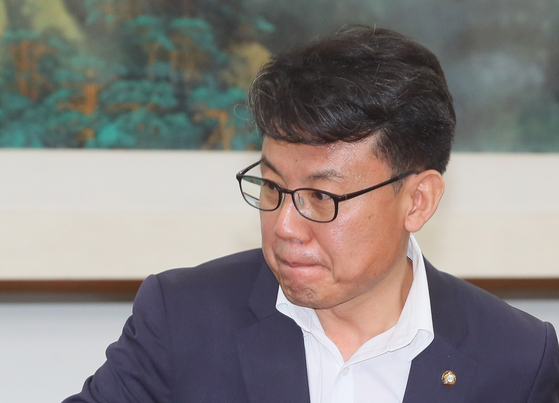 
A senior lawmaker of the Democratic Party (DP) admitted that housing prices won’t be curbed despite frantic efforts by the government in a hot mic blunder on MBC, fueling the outcry over the Moon Jae-in administration’s ineffectiveness in cooling the real estate market.

MBC on Thursday aired a 100-minute debate on the effectiveness of the government’s latest measures to cool the real estate market. The panel consisted of two liberal experts, including Rep. Jin Sung-joon of the DP, and two politicians from the conservative opposition United Future Party (UFP), including former lawmaker Kim Hyun-ah.

The debate was aired live on TV and on the broadcaster's YouTube channel. After the program ended, the panel members continued to discuss the issues, apparently unaware that they were still being broadcast on YouTube.

“It will be too much of a burden on the economy when [real estate prices] plummet, so we shouldn’t force it too much,” Kim, a real estate policy expert, said.

“What should the people do if a ruling party lawmaker on the Land, Infrastructure, and Transport Committee says something like this?” Kim asked. Jin did not respond.

Contrary to his remarks to Kim, which he appeared to think were not being broadcast, Jin expressed strong support for the Moon administration’s policy during the TV debate. “The policy must remain even after the end of this administration. Only then, we can resolve the real estate issue.”

He also pushed the argument that people should only own the house they live in. The Moon administration’s 22 sets of antispeculation measures announced over the past three years are mainly loan restrictions and heavier taxes to penalize multiple-home owners.

After Jin’s chat with Kim aired on YouTube, internet viewers questioned the integrity of the ruling party and the administration. They said the government and the DP are pushing forward radical policies although they have no faith in their effectiveness.

The controversy surrounding Jin’s remarks was also poorly timed as President Moon had just declared a war against owners of multiple homes in his speech at the National Assembly earlier Thursday. He vowed to bombard them with heavier taxes to curtail real estate speculation and curb apartment prices.

Joo also told reporters that he was more bothered about Jin’s two-facedness because he had served in key posts in the government. Jin is currently the chief strategist of the DP. He served as Moon’s political affairs secretary in 2017 and deputy mayor of Seoul in 2018.

Jin was elected as a proportional lawmaker of the DP in 2012. He was defeated by the conservative opponent in Gangseo B District in 2016, but won the April general election to represent the same district.

Rep. Kim Eun-hye, spokeswoman of the UFP, said Jin’s remarks revealed the two faces of the Moon government. “Actually, a candid confession is better than incompetence,” she said. “The government must withdraw the measures that are doing nothing but worsening the people’s sufferings.”

Jin issued a press release Friday to attack the media for distorting his remarks.

“What I said didn’t mean that the government measures are meaningless,” Jin said. “I was saying it is undesirable to protest our antispeculation measures based on the concern that falling housing prices will hurt the economy.”

He also met with reporters on Friday to explain himself.

“I was telling Kim Hyun-ah that the prices won’t go down drastically to threaten the economy,” Jin said.