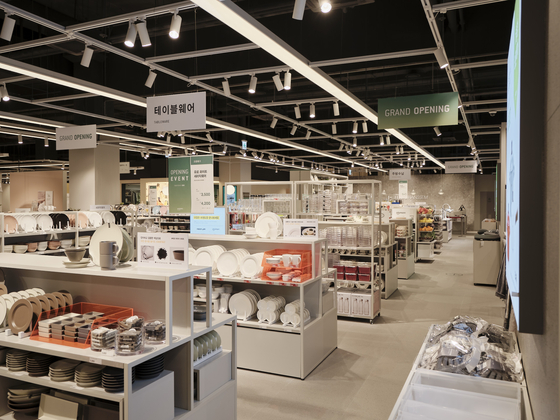 
With more people studying, working and eating at home because of the Covid-19 outbreak, furniture companies are doing well.


Property development regulations are helping too, as limits on redevelopment drive redecoration.

Hanssem announced an earnings surprise in the second quarter, while Hyundai Livart is also projected to report a strong performance, according to analyst reports.

In the second quarter, Hanssem's sales were 517.2 billion won ($430 million), up 25.9 percent on year. Operating profit jumped 172.3 percent to 23 billion won during the same period, the company said in a preliminary report released July 8.

It was the first time for Hanssem to report more than 20 percent on-year sales growth in four years.

“Sales from house remodeling has continued to grow over recent years, but furniture sales, which had been stagnant, went up, resulting in the overall growth of Hanssem sales,” said Hanssem's Youm Chang-seon.

The home furnishing market has been growing slowly in recent years, with total sales at 5.46 trillion won in 2017, 5.64 trillion won in 2018 and 5.85 trillion won last year, according to Euromonitor International. Based on the first quarter performance, the market value is expected to hit 5.87 trillion won this year, up 7.4 percent from 2017.

“People don’t spend much on furniture when the economy is sluggish because furniture is a durable good,” said Prof. Lim Chae-un, who teaches marketing at Sogang University. But he said government disaster relief funds have helped drive furniture sales.

Hyundai Livart is scheduled to report its second quarter performance next month. Expectations are for strong earnings.

According to analyst Park Se-ra from Shinyoung Securities, sales will probably rise 10.9 percent to 335 billion won, while operating profit will jump 95.9 percent to 12 billion won. Furniture sales to individual customers are projected to have risen 8 percent on year, Park wrote in a report on July 6.

Ikea did not offer projections.

“A further shift towards home-based working and studying means stronger demand, at least in the short term, for products like home office furniture and storage solutions, with an uptake in ergonomic chairs and modular desks,” said Ili Rahan, senior analyst, Euromonitor International. “The pandemic has also altered cooking habits. Cookware sales are expected to rise. However, price will play a more important role as consumers are more selective in their purchases amid the global economic uncertainty that Covid-19 has given rise to.”

Hanssem has been selling more furniture for children’s rooms, including desks. Hyundai Livart sold more sofas and tables in the first half. Sales to individual customers, as opposed to business partners, increased in the second quarter, according Lee Kyung-hoon, a spokesperson for Hyundai Livart.

For Ikea, online sales of home office furniture, including desks and chairs, kitchen products and gardening products rose in the first half of this year.

“High performance of furniture companies is a global trend following the Covid-19 outbreak,” said Prof. Seo Yong-gu, who teaches business at Sookmyung Women’s University. “People’s perspective on home has changed. Unlike in the past, when home was just a place to sleep, it has now become an office, school and a movie theater.”

The 22nd set of real estate cooling measures, which restrict redevelopment, is projected to boost the performance of furniture companies.