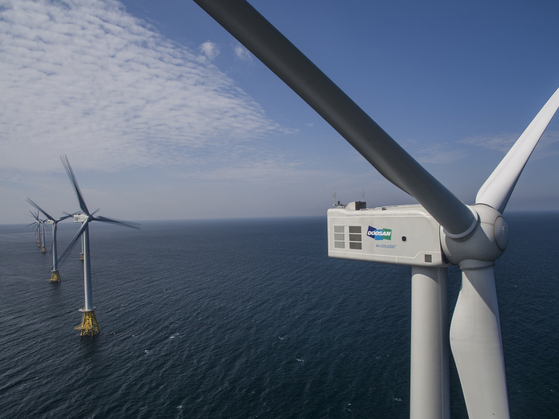 
The power plant builder said it will develop and supply offshore wind turbines with larger capacity, aiming for 1 trillion won ($830 million) in annual sales by 2025.

The company has to date supplied 79 offshore wind turbines nationwide, with a total of 240 megawatts of capacity in areas including Jeju Island and the West Sea. Its goal is to reach 12 gigawatts by 2030.

Doosan Heavy started developing wind turbine technologies in 2005, and says it has spent 180 billion won on the business.


The cash-strapped power plant constructor is increasingly pivoting to clean energy after locking in 3.6 trillion won in financial assistance from creditors.


The company is currently supplying turbines for a 14 trillion won offshore wind project in North Jeolla, which will add 2.4 gigawatts of wind capacity upon its completion in 2029.

Doosan Heavy’s goal by 2025 is to grow offshore wind turbine business to yield more than a trillion won in annual sales by 2025.

Offshore wind power in Korea is expected to grow rapidly under the recently announced government policies, according to Doosan Heavy Chairman Park Gee-won.

The company will “actively take part in the Green New Deal policy and contribute toward activating the ecosystem for offshore wind generation businesses,” he said.

Doosan Heavy aims to raise a trillion won this year by issuing new shares and selling off assets, including Doosan Tower in central Seoul, a golf course in Gangwon and Doosan Solus, an electronics parts supplier.

Lots of pain, maybe some gain