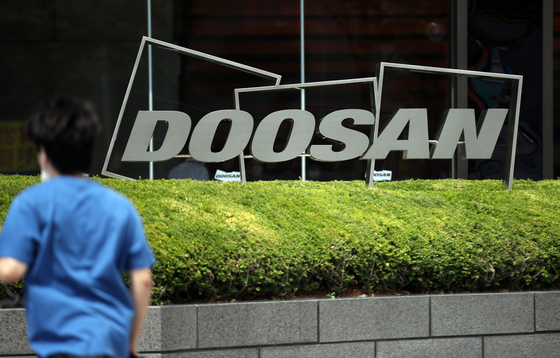 The cash-strapped power plant builder reported Friday it will issue a total of 121,495,330 shares of common stock for around 10,700 won each.

The final stock price will be set on Nov. 30.

The new shares will be listed on the Korea Exchange on Dec. 24.

Doosan Corporation reported on Friday it is selling its 18.05 percent stake in Doosan Solus to SkyLake Investment, a local private equity firm founded in 2006, for 238.2 billion won. Other major shareholders of Doosan Solus, including Doosan Group Chairman Park Jeong-won, are selling 34.88 percent of its shares to SkyLake for 460.4 billion won.

Doosan Corporation is also spinning off Mottrol, which makes hydraulic components, and hopes to sell the division to a consortium of investment companies for 453 billion won.

Doosan Corporation sold its 96.77 percent stake in investment company Neoplux to Shinhan Group for 73 billion won in August. It is also trying to sell Doosan Tower in central Seoul to reduce debt.

On the same day, Doosan Corporation voted at a board meeting to transfer a 23 percent stake in Doosan Fuel Cell owned by the chairman and his family to Doosan Heavy for free. The shares were worth 574 billion won as of the close of trading on Friday.

Doosan Fuel Cell also reported it would issue 342 billion won worth of new stock on Friday.

Doosan Heavy’s market capitalization is 4.13 trillion won, while that of Doosan Fuel Cell is 2.53 trillion won.

Doosan Heavy’s shares closed at 16,300 won on Friday, unchanged from the previous day.