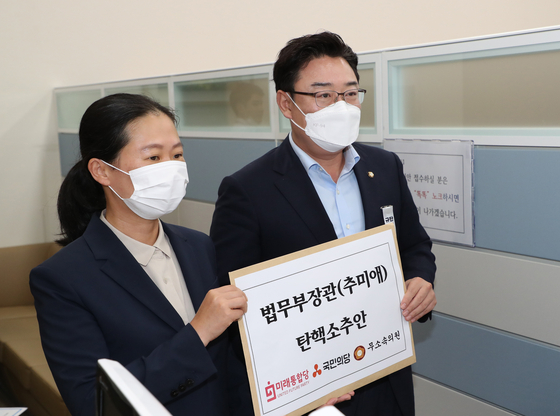 
The largest opposition party on Monday submitted a motion to impeach Justice Minister Choo Mi-ae to the National Assembly.

“Minister Choo has abused her power of office in various ways in violation of the Prosecutors’ Office Act,” Rep. Joo Ho-young, floor leader of the United Future Party (UFP) said during an emergency leadership meeting in the morning. “She also disgraced the ministry and removed prosecutors who are working hard on investigations from their posts although it was not a routine appointment period.” 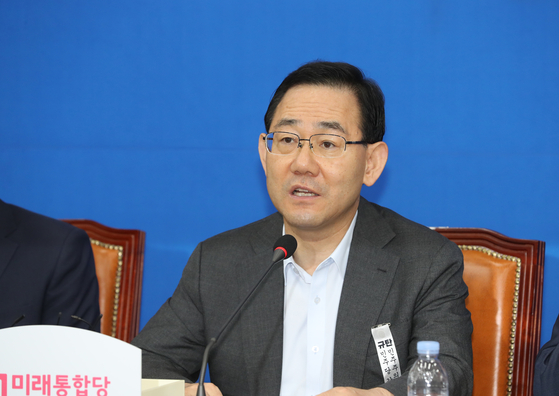 
Joo said that compared with the justice ministers who came before her, Choo has committed the largest number of legal violations and acted the most disgracefully.

“She also violated the independence and integrity of investigations,” Joo said. “When the motion is voted on, we believe many from the Democratic Party [DP] will support it.”

The People's Party, which has three lawmakers, also joined the UFP on Monday to submit the motion.

After the motion's submission to the National Assembly on Monday, it will be introduced in a voting session on Tuesday. The vote is expected to take place during the plenary session scheduled for Friday.


It is unlikely to pass, however.

Under the Constitution, a motion to impeach a cabinet member requires one third of the seated lawmakers’ support to be submitted to the legislature. The motion then requires a majority vote to pass.

The UFP controls 103 seats in the 300-member National Assembly, enough to introduce an impeachment motion but not enough to pass it. The ruling DP has 176 lawmakers.

If the motion passes, the Constitutional Court would hold a trial and issue the final ruling.

Since the Constitution was established in 1948, no impeachment motion against a cabinet minister has won the National Assembly's approval. Senior officials, mostly prosecutors and judges, have faced impeachment motions, but none passed.

This is not the first time that the UFP has attempted to impeach Choo. In January, the party submitted an impeachment motion against her, but it was automatically discarded under the law governing the legislature, which requires a vote to take place within 72 hours of the motion's introduction.

This time around, the UFP timed its submission to coincide with plenary sessions scheduled for this week. The opposition party announced the plan to submit the impeachment motion early Monday morning, ahead of a scheduled speech by the DP’s floor leader, Kim Tae-nyeon. 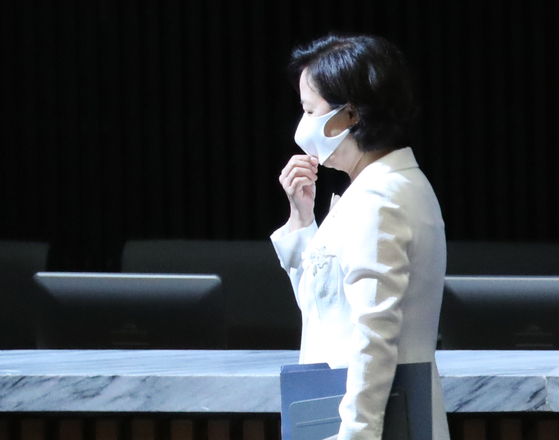 
The UFP and the People's Party also chose to submit a motion to impeach Choo, as opposed to a motion to recommend President Moon Jae-in to dismiss her, to stress that she should be removed for legal violations and not political ones.

The UFP argued that Choo made multiple violations of the Prosecutor’s Office Act's Article 8.

Earlier this month, Joo publicly demanded that Moon fire Choo for abuse of power, claiming that she was attacking Prosecutor General Yoon Seok-youl for having ordered investigations into suspicions involving key members of the president’s inner circle. At the time, Joo threatened to submit the motion to impeach Choo, if Moon did not fire her.

In a press conference on July 2, Joo said Choo ignored Yoon’s opinions and reshuffled the prosecution as soon as she took office in January, largely demoting senior prosecutors investigating the top politicians close to Moon, such as former Justice Minister Cho Kuk.

Joo also said that Choo violated the Prosecutors' Office Act by repeatedly issuing direct orders to prosecutors on how they should proceed with some politically sensitive probes, instead of only supervising the prosecutor general.