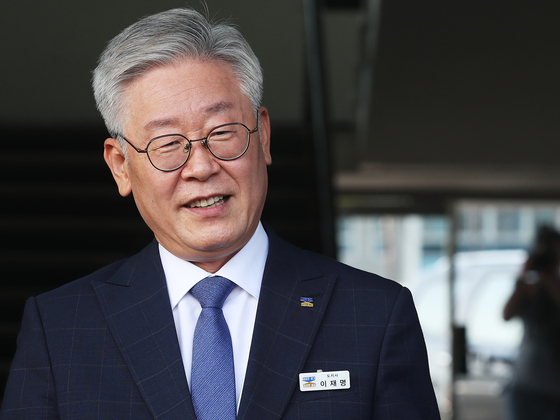 Gyeonggi Governor Lee Jae-myung smiles on Thursday at a press conference outside the Gyeonggi Provincial Government office building, after the Supreme Court acquitted him of an election law violation charge. [YONHAP]


Gyeonggi Governor Lee Jae-myung, one of the ruling party's strongest presidential hopefuls, said Monday that the party must not field candidates in the upcoming mayoral by-elections in Seoul and Busan to assume political responsibility for the vacancies.

“The party has stipulated that we won’t field a candidate when a vacancy is created by our member's serious misconduct,” Lee said in an interview with CBS Radio in the morning, referring to the Democratic Party (DP)’s constitution and regulations. “We must respect our own regulations. I never imagined this situation would unfold. But we cannot say that there was no grave misconduct.”

Lee was responding to the host’s question about what the DP should do about the mayoral by-elections in Seoul and Busan, scheduled for April next year.

Clause 2, Article 96 of the DP’s constitution says the party will not nominate a candidate in a by-election if a party member elected to a public office loses the post due to grave misconduct, such as corruption.

Still, some senior DP politicians recently urged the party to field candidates, arguing that Seoul and Busan metropolitan cities are too big to give up.

The Seoul mayor's post became vacant earlier this month after Park Won-soon, a DP member, was found dead in an apparent suicide, presumably after becoming aware that his former secretary had filed a complaint with the police alleging years of sexual harassment.

“I believe trust is the most important asset of a politician,” Lee said in an interview with CBS Radio in the morning. “Even a hawker puts up with losses to maintain trust [...] Even if the loss will be painful and tremendous, I believe it is right for us to keep the promise.”

Since the by-elections will take place in the country's two most populated cities, political observers have said the outcomes are expected to impact the 2022 presidential election.

Kim Boo-kyum, a former minister of interior and safety currently running to become the next chairman of the DP, said last week that the DP must revise its constitution if necessary to field candidates for the two mayoral races. 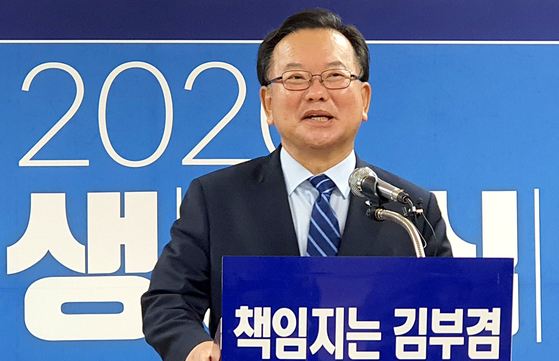 
In a July 14 Facebook post, Kim wrote that there are more than 10 million voters in Busan and Seoul. “The outcome will affect the success of the Moon Jae-in administration and the presidential election,” he wrote. “Politics is reality.”

It wouldn't be the first time for the DP to ignore its own constitution by fielding a candidate in a by-election in which the vacancy was caused by a party member's alleged sex misconduct.

In 2018, South Chungcheong Governor An Hee-jung stepped down over having abused his power of office to rape his secretary. In the subsequent by-election, the DP nominated Yang Seung-jo as its candidate and won the post.

While Kim says the DP must not give up the mayoral by-elections of Seoul and Busan, his chairmanship race rival, Rep. Lee Nak-yon, has not made his opinion public. 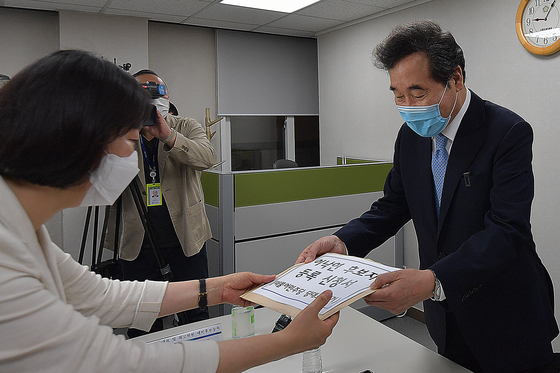 Rep. Lee Nak-yon of the Democratic Party submits his candidate application for the party's chairmanship election to a party official on Monday. [YONHAP]


Meanwhile, a recent poll showed the Gyeonggi governor’s popularity increasing as a hypothetical presidential candidate, after the Supreme Court last week cleared him of an electoral law violation charge. The court acquitted him, overturning a lower court’s conviction that would have removed him of office. 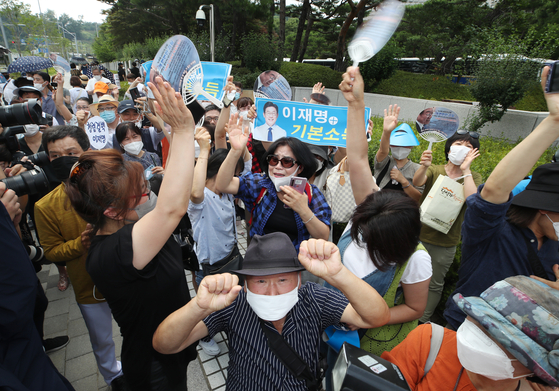 Supporters of Gyeonggi Governor Lee Nak-yon cheer outside the Supreme Court on Thursday after the top court acquitted him. [YONHAP]


According to the Realmeter survey on who should be the next president, conducted Friday, Rep. Lee, a former prime minister, was ranked No. 1 with 23.3 percent, while Governor Lee came in second with 18.7 percent.

The gap was within the margin of error. The poll, commissioned by YTN, had a confidence level of 95 percent and a margin of error of plus or minus 3.1 percentage points.

Despite not having declared his political ambition, Prosecutor General Yoon Seok-youl was ranked third, with 14.3 percent.

Governor Lee’s popularity remained steady in recent months, recording 14.4 percent in April, 14.2 percent in May and 15.6 percent in June, according to the monthly poll conducted by the Realmeter and OhmyNews.

In contrast, Lee Nak-yon’s poll numbers have fallen after the April 15 general elections. In April, a poll showed him leading with 40.2 percent, but his numbers subsequently sank to 34.3 percent in May and 30.8 percent in June.