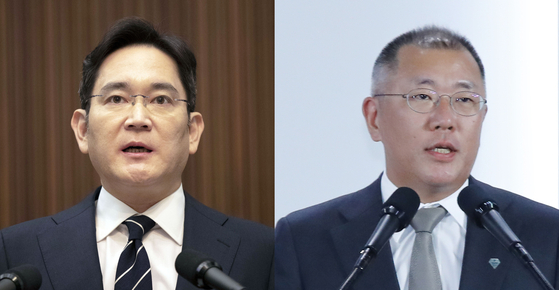 It was the tycoons’ second meeting in 10 weeks. On May 13, Chung paid a visit to a factory of Samsung SDI, the IT giant’s battery-making arm, in Cheonan, South Chungcheong.

Samsung Electronics and Hyundai Motor have never formed an alliance before. In fact, the two were rivals after Samsung launched an auto business in the 1990s, which it eventually sold off to French automaker Renault.

During the May meeting, the two scions discussed Samsung’s technology in solid-state batteries, which are considered the next most promising energy source for electric vehicles. They are safer and last longer than lithium-ion batteries.

Hyundai Motor's Namyang R&D Center, located 60 kilometers (37 miles) south of Seoul in Gyeonggi, is the center of the automaker’s ambitions to make the car of the future. The center was built in 1995 on a 3.5-million-square-meter plot but has been kept shrouded from the outside world and press.

Accompanying Lee was Samsung Electronics’ co-vice chairman Kim Ki-nam, who is in charge of the group's chip business, Samsung SDI CEO Jun Young-hyun and other executives. Greeting the visitors along with Chung was Seo Bo-shin, president of Hyundai Motor in charge of product management, and Park Dong-il, vice president of the automaker.

Chung has been active in forging a so-called K-battery alliance as collaboration between a battery maker and a car manufacturer is inevitable to survive the cutthroat global competition in electric vehicles.

After meeting Lee in May, Chung met with chiefs of LG Chem and SK Innovation — Chairman Koo Kwang-mo and Chairman Chey Tae-won — and visited each company’s factories as well.

Chung mentioned the meetings on a teleconference with President Moon Jae-in last week, in which Chung promised support for the government-led New Deal initiative.

"I feel proud about the fact that three world-leading battery-making companies are from Korea," Chung said in the online conference. "Through collaboration, we will take the lead in global competition."