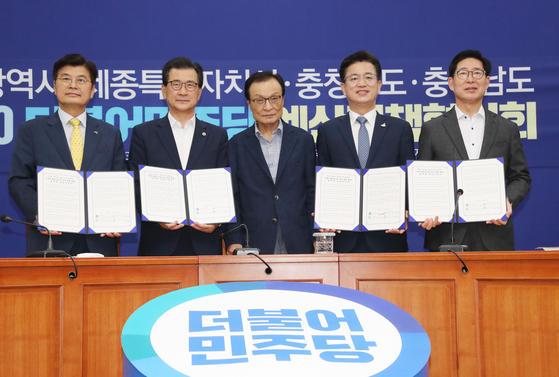 
Top politicians of the ruling party on Tuesday continued pushing the idea that the National Assembly and Blue House must be moved from Seoul to Sejong City as the government frantically tries to curb housing prices in the overcrowded capital.

“To spur balanced development of the country, we need to seriously think about the need to complete an administrative capital city,” Rep. Kim Tae-nyeon, floor leader of the Democratic Party (DP), said during a party meeting Tuesday morning.

Kim was reiterating his proposal that the legislature, the Blue House and other government offices must relocate to Sejong City. He unexpectedly revisited the proposal at the National Assembly on Monday, stressing that the relocation will resolve problems of severe urbanization and real estate issues.

In 2004, President Roh Moo-hyun has pushed forward an ambitious project to relocate the nation’s capital city to a new location in Chungcheong Province. The Constitutional Court, however, struck down the special law to establish the new administrative capital.

The Roh government subsequently revised the plan and developed the Sejong Special Autonomous City in the heart of the Chungcheong region in 2005 and relocated some of the government offices — but not the National Assembly, the Blue House or other key ministries such as the Foreign Ministry.

Kim, then, proposed that the opposition parties establish a special committee to discuss the project.

Rep. Lee Nak-yon, former prime minister and a presidential frontrunner of the DP, also backed the plan. “The ruling and opposition parties can strike a deal,” he said in an interview with MBC Radio on Tuesday. “Or we can ask the Constitutional Court again about its opinion.”

Kim Boo-kyum, former lawmaker and ex-minister of interior and safety, told YTN Radio on Tuesday that Seoul has become a competitive cosmopolitan city, and the country needs to think about next steps to develop other regions.

“I actively support this plan,” he said.

“Building an administrative capital city was strongly pushed forward by the late President Roh when he was in office,” Kim, who served various posts in the Roh Blue House and worked as the former president’s secretary after his term, said. 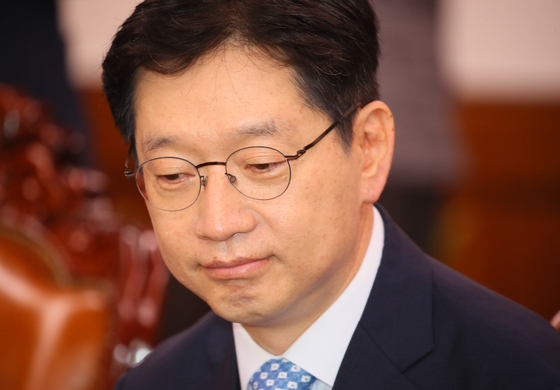 South Gyeongang Governor Kim Kyung-soo attends a meeting with National Assembly Speaker Park Byeong-seug on Tuesday at the National Assembly in Seoul. Both leaders supported the plan to relocate the legislature and the presidential office to Sejong. [YONHAP}

“The capital region occupies only 11.8 percent of the country’s land, but the majority of the population is living here,” he said. “The overpopulation produced various problems. If the National Assembly moves to Sejong, it will lead balanced national development.”

In an interview with CBS Radio, Rep. Kim Doo-kwan of the DP said lawmakers must pass a new bill to push forward the relocation project.

“Some say that the Constitution must be amended to relocate the administrative capital, but I believe there are other legal ways,” he said.

Kim served as the minister of administration and autonomy in the Roh government in 2003. He was one of the main architects of the ambitious administrative capital project.

“We need over 200 votes, so we must persuade the largest opposition party,” he said.

How to become a self-illuminating president