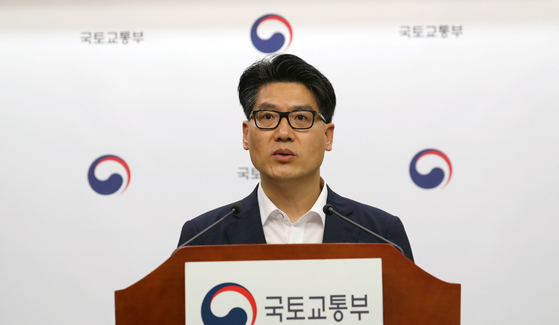 Kim Sang-do, deputy minister for aviation policy, speaks about Jeju Air’s cancellation of a deal to acquire Eastar Jet at a briefing at the Government Complex in Sejong on Thursday. [NEWS1]


Jeju Air is abandoning its acquisition of cash-strapped Eastar Jet, but Eastar is threatening to challenge the decision legally.


Hours after Jeju Air made its announcement, Eastar Jet said it can't scrap the deal without violating a stock purchase agreement signed by the two parties in March.

“Despite the government’s active support and effort to mediate, we concluded the level of uncertainty Jeju Air needs to assume by pushing ahead with the acquisition is too big,” wrote Jeju Air in a statement Thursday. “It’s also true that shareholders and people of interest are expressing major concerns about the damage [that could be done through the acquisition].”

Jeju Air's announcement came a week after Eastar Jet failed to meet certain obligations agreed to by the two parties. Jeju Air argues that failure gives it the legal right to call off the acquisition.

On March 2, Jeju Air signed a deal with Eastar Holdings, which owns 39.6 percent of Eastar Jet, to acquire the airline.

Eastar Jet was already suffering financially before the deal was signed, and the outbreak of Covid-19 made its situation worse.

Jeju Air “feels sorry it is not able to close the merger and acquisition deal,” wrote the budget carrier.

Eastar Jet added it will “take all actions for the survival of 1,500 employees and the company.”

With the deal unlikely to go through, the Ministry of Land, Infrastructure and Transport urged Eastar Jet to find another way to stay afloat.

The ministry said it will offer help when necessary after Eastar Jet comes up with an alternative.

The ministry “has been welcoming mergers and acquisitions within the aviation industry and providing various support for the improvement of the industry and strengthening of competition,” said Kim Sang-do, deputy minister for aviation policy, at a briefing at the Government Complex in Sejong on Thursday. The ministry "feels deeply sorry about the failure of the final merger and acquisition deal despite the mediation effort."

Eastar Jet has been unable to pay wages to its employees since February.

In regards to Hyundai Development Company’s possible scrapping of a deal to acquire Asiana Airlines, Kim said the ministry will wait for a conclusion as it is “yet too early to prejudge the recovery of the aviation market.”