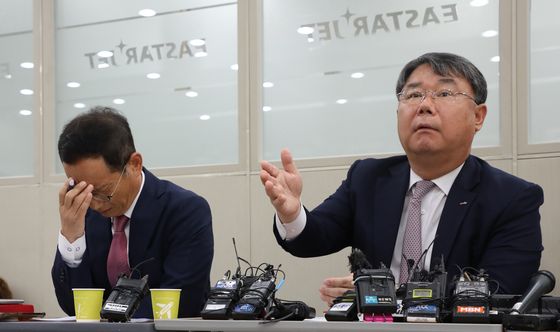 
Eastar Jet founder Lee Sang-jik announced Monday his family will be "donating" all the shares it owns in the troubled airline, as the acquisition of the airline by Jeju Air hangs in the balance.


It was not clear what Lee, a lawmaker for the ruling Democratic Party, meant by his pledge or how it will affect the acquisition, which was signed in March, well before the importance of the coronavirus crisis was understood.

On Monday, Eastar Jet urged Jeju Air to accelerate the acquisition, saying it is “the only answer for survival.” Eastar Jet added that delays hinder it from receiving government aid.


“As the Eastar Jet founder, I held a family meeting and decided to donate all the shares [my family] owns in Eastar Jet through Eastar Holdings,” wrote Lee in a statement that was announced at a press event held at Eastar Jet headquarters in Gangseo District, western Seoul, on Monday. “As the founder, I feel sorry for the unpaid wages of employees.”

Lee’s children own all shares of Eastar Holdings, which has a 39.6 percent stake in Eastar Jet.

Eastar Jet has not paid wages to employees since February and stopped operations in March. The unpaid wages are estimated to total around 25 billion won ($20.8 million).

Lee was not present at the press event. Eastar Jet did not specify how the Eastar Holdings shares his family “donates” will help the airline stay afloat.

The shares are estimated to be worth around 41 billion won, according to Eastar Jet on Monday.

“Jeju Air lent 10 billion won to Eastar Jet in December, taking Eastar Holdings’ shares in Eastar Jet as collateral,” Choo said. “The due date was June 26, meaning Lee would have to give up the shares anyway since Eastar Jet couldn’t pay the money back.”

The value of the shares is likely to be deducted from the 54.5 billion won Jeju Air agreed to pay for acquiring Eastar Jet shares from Eastar Holdings, he predicted.

Prof. Choi Jeong-chul, who teaches at the Graduate School of Manufacturing Innovation at Inha University, also challenged the use of the word "donation," saying it sounded like a political term. Lee "should have been clear on how the shares he gives up would be used specifically," said Choi.

Eastar Jet “strongly demands Jeju Air hurries the merger and acquisition deal with sincerity,” said Choi. “We agree we are to be primarily blamed for the difficulties of Eastar Jet, but Jeju Air also can’t be free from [all responsibility].”

Eastar Jet has been excluded from government support to airlines following the Covid-19 outbreak because Jeju Air is in the process of acquiring it.

“It is questionable whether Jeju Air will acquire Eastar Jet because it could lose its own value through the deal,” said Prof. Hur Hee-young, who teaches business at Korea Aerospace University. “Until earlier this year, market watchers regarded the acquisition positively, but the view has changed as the impact of Covid-19 on the airline industry is projected to continue until late next year.”

Recent speculation on how Eastar Holdings managed to purchase shares in Eastar Jet with little capital could become Jeju Air’s excuse to refuse or delay the acquisition of Eastar Jet, possibly citing legal problems, according to Hur.

Last week, Eastar Holdings was reported to have purchased 10 billion won worth of Eastar Jet shares in 2014 using its 30 million won capital.