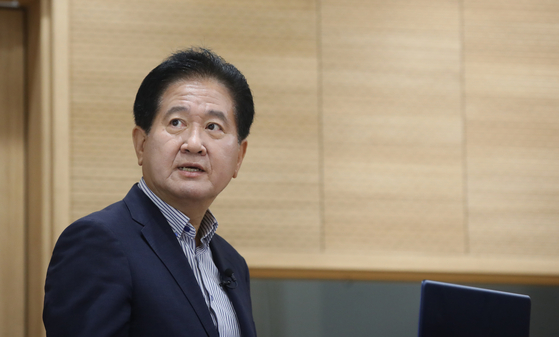 Former vice minister of defense Suh Choo-suk, seen on June 16, was named deputy head of the National Security Office of the Blue House on Friday. [YONHAP]

Suh will replace Kim Youn-geun. Suh will also hold the title secretary-general of the National Security Council, as Lee did.

Suh, 61, was the Moon administration’s vice minister of defense from 2017 to 2019. During the administration of Roh Moo-hyun, Moon’s political mentor, Suh served as senior presidential secretary for unification, foreign affairs and national security in 2006.

During the Roh presidency, there were two factions among diplomatic and national security policymakers, one promoting self-reliance and the other supporting an alliance with the United States. Suh was a prominent member of the self-reliance faction.

A graduate of Seoul National University, Suh has also worked as a researcher at the Korea Institute for Defense Analyses.

Moon also replaced four other secretaries on the presidential team, including an aide in charge of real estate policy. The replacements were evidently based on the Blue House’s earlier warning that senior public servants must own no more than one home, as many of those replaced on Friday were owners of multiple properties.

Presidential aides who owned more than one residential property have become an embarrassment to the administration, which is trying to crack down on real estate speculation and profiteering to cool prices.

Ha is replacing Yoon Sung-won, who had faced criticism for holding onto his residential properties.

Yoon owned one apartment in the affluent Gangnam District of southern Seoul and another in Sejong City. On July 12, Yoon said he sold the unit in Sejong, but was mocked because he held onto the more lucrative property.

Yeo Han-koo, a senior official at the Ministry of Trade, Industry and Energy, was named secretary for New Southern and New Northern policies. Yeo is replacing Park Jin-kyu, who also took heat for owning multiple properties. He had four apartments but sold two recently.

Do Jae-hyung, a law professor at Ewha Womans University, was appointed secretary for employment and labor. Do’s predecessor, Cho Sung-jae, also owned two homes — one in Seoul’s Songpa District and another in Sejong.

Yoo Geun-heag, head of the population policy office at the Ministry of Health and Welfare Secretary, was named secretary for social policy.

Speculation is growing that more changes will follow to boost the popularity of the president.