Against all odds, Kakao Bank roars to life in just 3 years

Against all odds, Kakao Bank roars to life in just 3 years 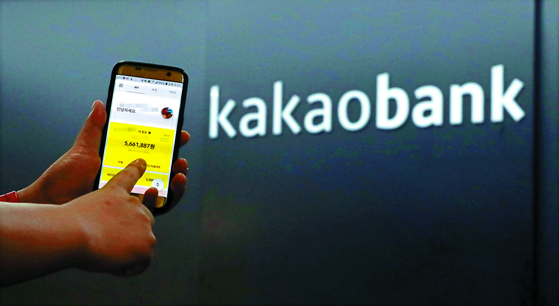 A person uses the Kakao Bank application in front of the bank's office. [YONHAP]


What started as a small online-only bank in July 2017 has grown beyond Ryan the maneless lion debit cards. Kakao Bank is now a market disrupter.

Its total capital now exceeds that of some regional banks, and it is the No. 1 in terms of active users of online banking apps.

The bank remains a minnow — in terms of assets, it is about 4 percent the size of Shinhan Financial Group —and it is in an industry that has failed to catch on in most of the world. Customers tend to stick with traditional commercial banks rather than switch to purely virtual banks.

But it is growing fast and quickly taking businesses to the next level.

Marking the bank's third year anniversary, the JoongAng Ilbo looked back at how Kakao Bank forged new trails and grew at expectation-busting speeds.

“We are terrified at how Kakao bank is rapidly growing in a direction we never expected,” said one executive from a commercial bank.

Around 12 million people have used Kakao bank as of May — one million users more than those on KB Kookmin Bank’s mobile banking app, the runner up. It has maintained the top spot since 2019 May, according to Nielsen.

“The most important data for us are the number of unique visitors. We want to increase traffic through our user experience and fee waivers and create a virtuous cycle of the traffic leading to customers purchasing products and services from our platform,” said an official from Kakao Bank.

Since the bank opened in 2017, its biggest focus has been convenience. It launched services that can be used without having to open an account with Kakao. One example is “community bank accounts,” which are used to manage money and split payments in group gatherings. The company says around 44 percent of people who used this service ended up opening an account with Kakao Bank.

It’s micro-scale savings accounts, where people can save as little as 1,000 won a week for 26 weeks, helped bring in a lot of new customers, according to the company. Not only was it different from conventional savings accounts, but it also increased in popularity as account holders started sharing their progress on social media. 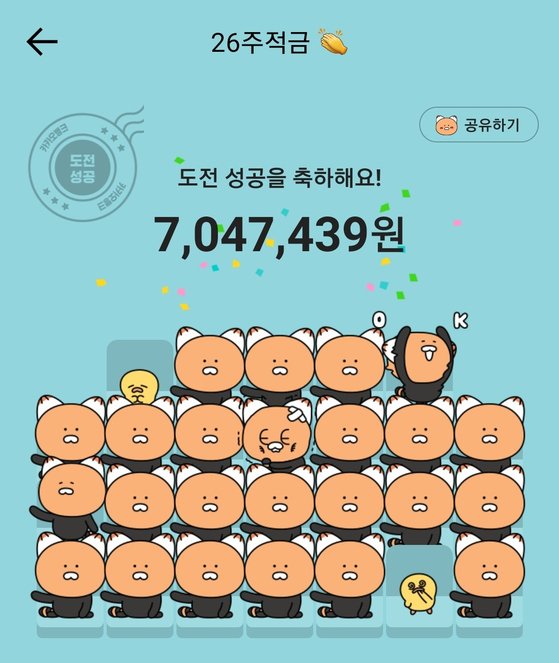 
While commercial banks are focused on selling products they originate, Kakao Bank is active in partnering with brokerages, banks and credit card companies.

It also serves as a proxy for four — Shinhan, KB Kookmin, Samsung and City — credit card companies, while the bank connects users with bad credit to non-bank financial institutions. The company said 1.3 trillion won ($1.09 billion) worth loans were taken out through its platform.

“We are a financial platform but also with a license to operate a bank. This is why we can create our own products,” said an official from Kakao Bank. “We are planning to secure more content using our securities division and the insurance company expected to launch soon.”

Kakao Bank was relatively late in entering the open banking arena. Early this month, it added a function where users can check the balances of other bank accounts and transfer money.

“We want people to use our open banking service, so more people can use our bank as the main and not a secondary account,” explained the online-only bank.

The company says it's seeing a recent surge in new middle-aged customers after contactless services became popular from the coronavirus pandemic. While currently, only 13 percent of its users are over 50, the company says in May, that ratio almost reached 17.5 percent.

Kakao Bank started turning a profit last year and plans to go public around 2021. Analysts expect the bank’s market capitalization to exceed 5 trillion won after the initial public offering (IPO), which may be behind market leader Shinhan Holdings, but close to Hana Financial and Woori Financial.

“As more people turn to contactless channels, Kakao has a competitive advantage in terms of fixed costs because it does not have an offline store,” said Koo Kyung-hoe an analyst at SK Securities.

“Once Kakao Bank secures capital through an IPO, it will lead to rapid growth and improvement in performances.”