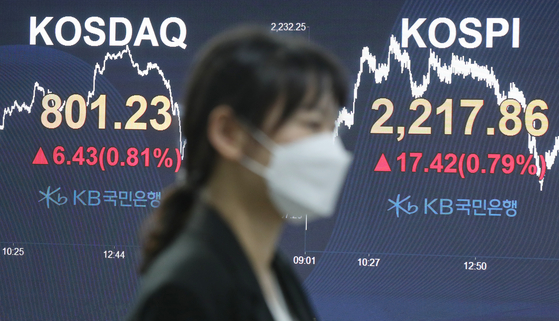 The final Kospi figure is displayed on a screen in a dealing room at KB Kookmin bank in the financial district of Yeouido, western Seoul, on Monday. [YONHAP]

The Kospi traded higher on weak U.S. greenback, triggered by stimulus moves in major economies around the world, analysts said.

"The EU agreement on economic relief package weakened the value of the U.S. greenback against other currencies," Samsung Securities researcher Seo Jung-hun said, predicting a rise in foreign buying.

Investor sentiment further strengthened following reports that U.S. Republicans were set to roll out a $1 trillion Covid-19 aid package plan early this week, with support from the White House.

The escalating U.S.-China tensions remained a risk, however, amid signs that virus infections may be slowing.

Stocks slump for a second day as foreigners sell